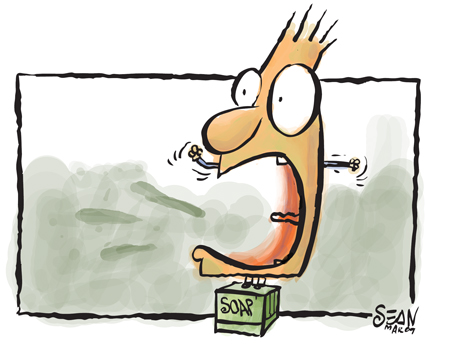 So you're all focused on customers. Customers bring in the bread, the butter. And yes, sometimes the jam. But if you focused on competition for an itty-bitty while, you'd find that you could have a lot more jam.

Doesn't make sense?
Well here's how it works. Let's say you're selling a product or a service. Let's take a product to begin with. Let's say you've worked out how to make a great lemonade. And now you've pretty much sold the lemonade to all the supermarkets. And to all the stores. And you've got 95% of your market saturated with your sweet, sticky lemonade.

What are you going to do next?
Of course if you're silly you'll try and get the remaining 5% of the market. But if you're smart, you'll stop focusing on getting more customers, and instead focus on getting more of the competition interested in what you're doing.

Why would you do that? Why give away your secrets?
Yeah right! So it's a big secret. It's not, actually. Anyone can easily create a lemonade that that's just as sweet and sticky as yours. What they struggle to do is to replicate your method of distribution, marketing and management.

But won't the competition put you out of business once they know the secret?
If the competition really wanted to ferret out your secrets, couldn't they do that just as easily? All you really have to do is track someone closely; see what they do; and then replicate it.

But often there's more beyond the obvious
And your competition knows it. They know that for every product you've ever sold, you've got a dozen underlying systems in place. And that's what they'll pay to learn. And you're the one who can teach them.

Of course they may try to wrestle you out of your own market
There's always that crazy risk, but technically you're so far ahead, that they'll never ever catch up. Yes, you think they will, but they won't. Unless you get lazy and sloppy. And believe your own press.

How do I know this to be true?
Because we've given away all our secrets at Psychotactics. If you want to learn how to write blog posts like this, I can tell you (there's even a course on Article Writing where we give away every last secret). There's a course on copywriting. There's a course on speaking and selling from the podium (our conversion rate is 50% or more, and we never make a pitch or do anything sleazy). There's a course on information products. And there's an answer to any question that you may want to ask us.

And this is how we quickly built Psychotactics to the point where we can go on three-month vacations every year. (See photos on Facebook too) We don't treat a secret as something hallowed. A secret is for sharing. You can give, and give and give and give, and there's still more that the competition wants to know. Because even as they're playing catch-up, you're moving ahead.

So why would they bother playing catch-up, if you're going to win?
Even the competition knows that there's loads of space for everyone in the market. For one, your competition may not even be in your own town, city or country. But even if they are, there's still enough business to go around.

And competitors know this…
Which is why they're willing to pay us the dollars to give away our secrets. And which is why we're more than happy to do so. On every course I've ever had, at least a good chunk of them will be competitors. And not only will they do similar stuff, but we actually tell them to ‘not reinvent the wheel', and to use a lot of our material as the basis for getting their business going.

Yet most of us want to take our secrets to the grave
Ah well. What can I say? I've already said it enough. Competition will generate more revenue than customers, no matter if you're in a service based business or in products. Or training, for that matter. And better still, competitors will keep coming back to learn the upgraded skills. Yes, they become customers in a way, but not for your products, but for your information.

It's win-win, of course. They win. You win. And you get to take the three-month vacation. 🙂

P.S. How do you build your business, so that you too can take the three-month vacation. To get started, you may want to learn how customers buy. Have a look at Why Customers Buy (and Why They Back Away): The Brain Audit