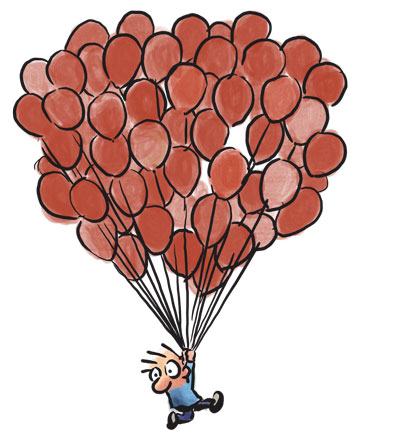 How do you instantly grow your small business?

How do you become “rich” overnight? These are the frustrations we have to deal with, almost every single day as we wade through the temptations of the internet.

It almost seems like a lottery, doesn't it? But people win the lottery, don't they? And so we fancy our odds too. Yet, there's a hare vs tortoise race in play here and usually, it's the hare that seems to burn out.

How can you enjoy the race and have a good life and yes, become an “overnight success”? Find out in this episode.

Winning the lottery is like flushing money down the toilet, right?

Richard Lustig doesn't agree. Despite odds of 175 million to one, Lustig has won the lottery seven times, and claims he's won over a million dollars so far. When you hear the repeated success of Lustig, it's easy to miss the sub-text in his wins. The first point of the sub-text is that he's been playing the lottery since 1992—that's well over 25 years. Plus he has a strategy. He goes after the smaller prizes, like the $100,000 lotteries, completely avoiding the $40 million jackpots.

Are you going after the $40 million jackpots in your business?

You know what I mean, right? Let's say you've managed to make the break from a job to your own business. That move, wonderful as it is, hasn't brought a lot of relief because you still have to commute to and from meetings with clients. And now you're keen on hitting the jackpot. Well, what's the jackpot? You want to reduce or eliminate that commute completely, don't you? And while it would be ideal, that's not what a “gambling man” would do.

A “gambling man” would reduce their odds of losing. Instead of five days of commuting, maybe you can whittle it down to four. Four may not sound like much until you get into the percentages—yup a 20% increase in home-time, isn't it? In the months to follow, reduce that by yet another day, and you have a 40% improvement over the start of the year.

Let's say you're earning twenty three dollars online. What next? Oh, that's easy. Most people would like to go from twenty three to two hundred thousand and twenty three. It sounds bizarre right now, as you're reading it. No one in their right mind is likely to achieve so much of a monetary gain, so quickly. Even so, it's a lot like playing the lottery, isn't it? You see others playing, they seem to be winning; surely you have the same odds too.

Our world, your world is inundated with success stories

Everyone is making more money than you, everyone is spending more time on vacation (yes, I'm guilty) and everyone seems to be winning the lottery, except for you. It's not like there's any shortage of avenues, either.

Some make their fortune via podcasting; others on YouTube; the third through some SaaS (software as a solution) offering. We all have this multi-pronged attack of the different types of media that will make us our fame and fortune, and the fact that everyone else seems to be doing just fine.

He's spent the past 25 years hacking away at the lottery. He's picked the smaller wins, because the odds are so much better. It's all about structural change, making sure that he gets ahead bit by bit. And to be fair, his gains are pretty average by a wage standard.

By his own admission, he's won a little over a million dollars over twenty five years. That's a pretty modest $40,000 per year. You can easily beat those odds in your own business, but your goal must always be structural.

I guess it's time for an example, right?

When we bought our first house in New Zealand, it was priced at $230,000. I'd read a book about how to whittle down that mortgage in a few years (In New Zealand it pays to wipe out the mortgage quickly). Our expenses, barring educational courses, was about $3000 per month (and that included the mortgage). We set about aiming to turn that mortgage into a big fat zero. In the first five years, we bought three houses in Auckland, totalling well over a million dollars.

In ten years, we paid off every last cent on those loans. Would anyone in their right sense try and pay those loans in three months? How about six months? Ten years seems pretty quick by any standards, but we learned what we had to do, and we went about it systematically.

We applied the same rigour to our business

In the year 2000, the business was just a website with a dozen articles. No one bought anything, hardly anyone read much of anything. We simply buckled down, went for dozens of meetings with clients. And out of those dozens, sometimes hundreds, we got ourselves our first client; a sofa store.

The second client was a law firm. The third was a division of Quickbooks. We paid the mortgage, we budgeted our expenses and the only big blow out was education. I bought a ton of stuff online and we both read through them. We listened endlessly to workshops and marketing material (even the stuff which was tedious).

It took a while for things to happen. The first international workshop was in 2004, but that was after we'd done a tonne of speaking sessions in little places all around New Zealand. By 2006, we had our first really big ticket item, the Protégé sessions where clients paid us a substantial sum. That's when we knew we were finally getting somewhere.

Jim Collins is the author of “Good To Great”, a book that has sold over 2 million copies

We know what leads up to that chicken moment

It's structural change, bit by bit. Whether you're aiming to win the lottery, or start up a business, your job is to go about the steps systematically.

— Will you get twenty e-mails telling you that you could become a millionaire overnight? Sure you will.
—Will there be a pull to do this, that and the other all at once? Sure there will.

But eventually, it's the gentle progress that counts.

Progress like commuting just four days, instead of five; getting one strategic alliance per month; taking on one medium, e.g. podcasting, and working it day after day for the next few months, weeks, and yes, years.

All those stories about how you can double and treble your income, they're probably true. And they probably aren't at odds of 175 million to one. However, the structural way is better. With tiny changes, you can move ahead. You can slowly but surely get your commute down to zero; your bank balance to a healthy state and pay off the mortgages in style.

If you want to become an overnight success, you'll need to slow down a bit and work the structure.

The odds are a lot better, I can assure you.