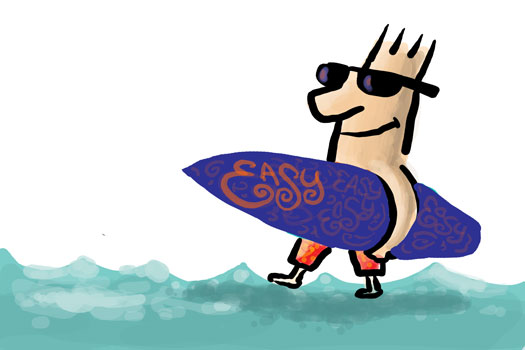 It bugs you no end. But the con artist will do better. They always seem to sell more than you. But why is that?

No matter what you try, the con man has a weapon you don't.  It's called greed.

And of course the con artists don't call it greed. They call it “quick”. As in: Make $200,000 a year or more (quickly). Or get to the top of Google Rankings (quickly). Or get out of jail (quickly). And our greed kicks in. We can't help it. We never will be able to help it. It's just human nature to want something bright and shiny (and eventually useless).

And of course it bugs you no end.
You can see that people— and not just people but your customers and friends—are wasting their money on con artists. And it frustrates you.

It should frustrate you. Because if you do nothing, you simply drive these very same people to more con artists.

So how do you beat the con artist?
You offer the opposite of greed. You offer difficulty. Now that seems weird, doesn't it? Why would anyone buy into a factor of difficulty? But you see, that's what's needed.

You cannot (yes, cannot) succeed with the shortcuts that con artists promise you. It's impossible for you to do “just a little” and succeed. Even the con artists have to work over 8 hours a day just to con you. So we know for a fact that it's totally and completely impossible to succeed without hard work.

And hard work is difficult
So trying to convince your customers not to go to the con artists is actually counterproductive. The moment you tell them not to do something, that ‘something’ becomes far more desirable.

But do your part: Tell them that you're offering a factor of difficulty. Promise your customers difficulty, because you see difficulty is just as powerful as greed. A person will jump hoops and climb mountains to achieve things—if you set the barrier high enough.

As humans we're very keen to see ourselves in a better light. And so, given enough difficulty we will push ourselves and come out shining on the other side.

Difficulty works
We know it works, because we've seen it work at Psychotactics. We sell our courses at the highest prices and we promise difficulty. And guess what? We push people to achieve their goals with a high degree of difficulty. You'd think that would drive people away, right?

But it doesn't. In fact, we've sold more products by promising difficulty than we've done by sitting on the fence.

You see you can't promise “quick” because there is no “quick and easy”
But by not promising difficulty you're sitting on the fence. You're not setting standards for yourself or your customer. And so the customer finds it easier to go to the con artist, because at least that way there's some promise (rather than yours, which is no promise at all).

The question does arise: So how do you create difficulty?
1) In your sales letter and promotional method.
2) In your sign up method (you create barriers such as “forms”. For our courses you have to buy and read The Brain Audit. If you don’t, you’re not accepted).
3) In the post-sales process: Where people have to do an interview to qualify.
4) In the methodology or consumption of your products/ services (a specific goal to reach within a specific time period).
5) In your price. Yes, you can't be the same price as everyone else. You have to go up.

So you'll want a case study, right?
Well there's the Article Writing Course (one of our clients calls it the Article “Writhing” Course). It's billed as the most difficult and the most expensive in the world. You think I'm joking, right? Why would anyone sign up for a difficult and expensive course?

And yet the day we changed from just a “course” to the “most difficult course” our sales went up by 300% (Maybe more. I stopped counting). We had to literally shut the doors in a hurry to keep more people from signing up. And the home study version did so well that we were able to get groups of people to work within 5000bc and implement the course.

And what about the methodology?
Yes it's the best course in the world—no two ways about it. Yes it's the most difficult. And yes, at least 85% of the members turn out to be top-notch writers (In every field, there's a dropout factor).

So what's top notch? They not only write about their own business, but they can write about your business or anyone's business. Give them any topic, on any subject matter in any field and they can do it.

They get so good that if put one of their articles in front of you, you wouldn’t be able to tell whether I wrote the article or they did.

And it not only works, but it gets great testimonials
And in every case, the testimonial does the same job: It promises difficulty. Not ease. And of course this attracts more customers. Amazing and entirely true.

In the end it will still bug you no end that con artists do better than you.
But now there's something you can do about it as well.
Promise difficulty. It works. Not as well as con-artistry. But then you don’t have any intentions to be a con anytime soon, do you?

——————–
Next Step: Are you losing tons of potential business because you don't know how the brain works?
Read how The Brain Audit can help you.