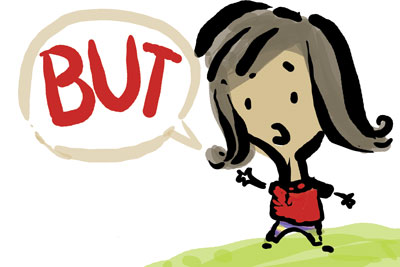 Listen to yourself as you’re speaking. You'll invariably find yourself saying the word “but” several times a day.

My niece Marsha used “but” as a five year old would…

If she did something wrong, she defended her way out of it by saying the word “but”. What made it funny was the fact that she almost used the word “but” like a machine gun.

So a conversation would go like this: Marsha did you drop the coaster on the floor? “Yes, but, but, but, but, but,…” Marsha would say and instantly absolve herself of any responsibility.

It was never her fault.

She never wanted to say sorry.

She just learned to say “but” instead.

Till the day, she ran into Renuka (Miss Queen)

Renuka is called “Miss Queen” by Marsha. The Queen can do no wrong. What the Queen says, the “subjects” have to “accept”. Marsha even bows before the Queen.

Well, Miss Queen decreed that not only would Marsha have to stop saying “but”—she'd also have to pinch her own butt, every time she said the word “but”.

So there you have it, a five year old self-fixing the problem

Do five year old kids self-correct in a day? Well Marsha did. She didn't quite stop saying “but”. Yet she knew exactly when she said it. And because of the “royal decree” she would faithfully pinch her own butt, if she slipped up.

In less than a week, the word “but” had almost disappeared. And now almost eight months later (at the point of writing this article), Marsha almost never uses the word “but”. And if she does, you know what comes next.

And it doesn't stop there

Marsha's become a pinching machine. Her father, mother, uncles, aunts are all on the pinch list. If they slip up and say the word “but” there's Marsha flying across the room to pinch their butt (Grandma and Grandpa are exempt from the rule. And as you would expect the Queen has diplomatic powers too).

It's important learning for Marsha, and just as important for the rest of us.

1) You can stop being defensive. The word “but” is mostly defensive except in rare conditions. The more we take responsibility for our actions, the less we need the word “but”. And the fewer excuses we have in our lives.

So the next time you find yourself saying “but” pull out your forefinger and thumb.

Reach for your butt, and tighten into a pinch. Do that a few times and you'll find that your butt is a good reminder to stop saying but.

And the best way to take responsibility for the rest of your life.