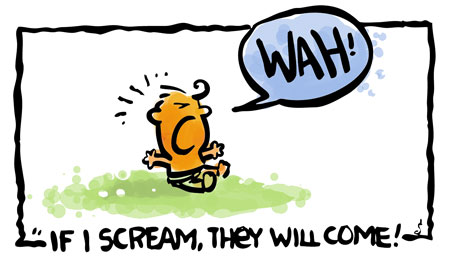 Ah, but that's not the question

The question is: Can Stevie Wonder learn faster than you?
Well, I wish it were a pat answer, but it's not. It depends on various factors including how active your brain is, aging etc. But the brain obviously doesn't care.

It will choose any pattern that's available to it.

In fact the interesting thing about babies is that they only learn through sound. In fact, they're at the mercy of sound. You can literally cause problems with a child's brain with crazy sounds. And then before they're two, they can distinguish stuff you and I can't see at all. Every child—yes every child—even a six month old baby can tell the difference between twins. Don't believe me? Try it for yourself. Put twins in front of a six month old.

Do what you want. Mix the twins around. Do whatever you please.

The child will recognise the right twin, even as you struggle. But forget twins. Children recognise the difference between two puppies, raccoons, monkeys—it doesn't matter. You may find this amazing, but there's documented proof, there's video on this phenomenon.

Then they learn that certain patterns are useless. We don't need to learn how to recognise raccoons any more. And recognising twins is nice, but not crucial. Recognising his/her parent's face is critical. And recognising the sound.

So these patterns are not just highly formed, but the brain actually has a storage area especially for faces. Your brain stores it in the area called the fusiform gyrus. Some people e.g. chess players have actually hijacked this section of their brain to remember entire chess games the way you and I remember faces.

The brain doesn't care what you and I think.

It doesn't care.
It doesn't care that you think that you are smarter or not.
Given the fact that your genes are not mutated, or you don't have a certain section of your brain damaged, etc. it will process data like data. It doesn't care if it's sound data, or visual data or any data. It will just recognise the pattern and it will remain frustrated till it learns the pattern.

This is why we can't draw.

We think it's some special skill.
But kids under five don't know they can't draw.
They just don't know.
So they draw.

Go to a three year old. Give him/her a crayon and a sheet of paper.
Then watch what happens next.
Try this with a three year old, a five year old, a four year old. The results are exactly the same. Every one of them draws. And that's because their brain has a clear pattern recognition factor. It says: Hey buddy. That's a nice red crayon.

This child will forget how to learn to draw by the time she/he is about five.

But why do we lose these skills?

We lose them because:
1) We don't need them. They're not critical.
2) We follow our parents' lead (we follow what makes them happy).

This is why we grow up with preferences of reading, drawing, music etc.

A family where there's music all day has um, musicians. And no it doesn't matter that they don't turn up at Carnegie Hall. They grow up with a language (pattern recognition) of music. A family that has artists, will learn to draw (everyone in my family draws, except my dad). A family that is in the circus will have kids doing stuff that would give you a heart attack as a non-circus parent.

But it certainly means that the pattern must exist to understand it.

And once you understand it, your brain decodes it.
It doesn't care what you think.
It just decodes. Encodes. And then if it's important, it remembers the pattern.

And of course we call that pattern “talent”.

And we wait for the applause.