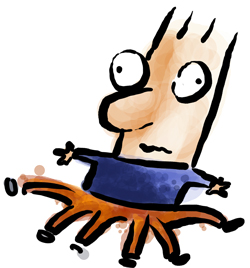 Is resistance a game?

It can feel a bit like that when you're almost always on the losing team. But often the reason why we lose to resistance is because we don't realise how the brain works.

And this brain stuff was studied by researchers at the University of Cincinnati. What they found was astounding. In just over 10 minutes, our brains start to waver and we lose focus. So how can we make sure we don't give in to resistance? Find out in Part 2 of the Resistance game.

Imagine you had two loans to pay back

Loan A was $100,000 at 19% interest per annum. Loan B was $200 at 1% interest. Which loan would you pay back first? Loan A or Loan B? If you chose Loan A, then almost every financial consultant on the planet would agree with you.

That's because Dave understands inertia better than most other financial consultants

So what is inertia? I learned a funny definition in physics class at school. It went like this: A body in the state of rest or motion is inertia.

Hah, that made me laugh. How can you be stuck and moving, and still be in the same state? But apparently that's how inertia works. And this is Dave's advice to people who are struggling with debt.

First list all the debts on a piece of paper

All debts need to go down. Student loans, credit card, mortgage, blah, blah. Then you need to rearrange the loans based on the size of the loan. So the smallest loan goes right at the top and the biggest one right at the bottom.

And everything else in between (depending on the size of the loan). And then he instructs you to pay only the minimum payment on every debt–with one exception. After the minimum payments were made, every available dollar needs to be put towards the first debt on the list.

Incredible as it may sound, Dave is telling you to wipe out that tiny, itty-bitty $200 debt with the pathetic interest, instead of taking on the painful big amount/big interest debt.

Logically it makes no sense

But your brain doesn't always work logically when it comes to inertia. While you're lounging on the sofa, watching endless and pointless political debates on TV, your logic is telling to get off your butt. It's telling you that the debates are endless (and did we say, pointless?).

Your logic is also telling you that you should be doing some work or exercise instead of engaging in mindless drivel. So logic doesn't work. And the same applies to the debt. When Dave's clients wipe out the first debt it's not necessarily logical, but it creates a factor of momentum. First the $200 is wiped out. Then the $350. Then the $800. And so on, right up to the ‘monsta' $100,000.

The motion is what matters

A body in a state of rest or motion is inertia. And going from rest to a state of motion is impossible if you decide to take on the biggest task first.

So if you need to get something done, fool yourself

-Don't go for a 60 minute walk. Instead put on your shoes and decide to walk for just 7 minutes.

-Don't try to write a complete article. Just write for 14 minutes. Then stop.

These tiny bits help you get to the bigger bits. Because even as you go for the 7 minute walk, you know very well that you're not going to turn around in 7 minutes.

You'll go longer and further. But the goal always needs to be 7 minutes or 14 minutes or the $200 debt. The itty-bitty bits are important, more important in fact, than the bigger goals.

When people say they feel inertia, they mostly refer to a state of laziness

Of not wanting to do anything at all. But as my physics teacher would tell you: “There's inertia and there's inertia.” And to get from one stage to another, you need to make the list in descending order of importance. Then attack the list.

And as Dave would say: Start small.

Dave Ramsey's ‘Snowball Debt' and ‘Switch' by Chip and Dan Heath. P.S. Yes I know. You're headed to Google these names, aren't you? You think you'll find out more about this book and this method of reducing debt, aren't you? But you already have the tools.

You have a piece of paper. You have a pencil or pen. And you have the methodology. So don't muck around. Get to work. You need to change that state of inertia right now.

If you haven't yet subscribed: Here are the links to get all the Psychotactics articles, goodies and podcasts automatically.
iTunes   |  Android   |  E-mail (and get special goodies)   | RSS