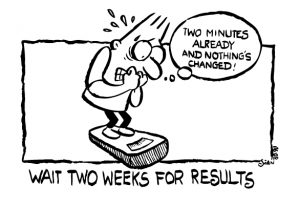 Your marketing strategy.
Your advertising campaign.
Your website landing page.

They'll all fail. Not miserably. But enough to make you wonder why you're not converting as well as you should.

And there's a reason why enough customers aren't buying

You're missing out the distinct gap between attraction and conversion. The gap gives the customer a chance to react to attraction and catch their breath, before moving on to buying what you have to sell.

If you don't pause, you create a mish-mash in your communication and consequent response.

So how do you avoid the inevitable mish-mash?

Let's assume you're in a bookstore. What do you see first when you look at the bookshelves? Why of course, it's the colour of the book cover or the name of the book.

So a book would have a name like: Don't make me think.
Yet the subheadline would be: A Common-Sense Approach to Web Usability

The headline: Secrets of the Millionaire Mind
The subhead: Mastering the Inner Game of Wealth

The headline: The Brain Audit
The subhead: Turning lukewarm prospects into red-hot clients

Did you notice the pause between the attractor and converter?

No more or no less.

The subhead on the other hand is the converter. It's often much longer and more detailed than the headline.
The headline is more of an idea. A spark. The subhead is what's selling you the system.

There's a difference between an idea and a system

An idea attracts. The system converts.

To be an attractor, your headline needs to promise an idea.

-Let's analyse the headline below:
Wouldn't you like to write copy that turns tentative prospects into red-hot clients?

-Let's then analyse the system (which is the subhead)
Learn the step-by-step system to increase your profit and get your products and services selling faster than ever before!

Notice how the headline (attractor) talks about the idea of turning your prospects into clients. It's an idea that many businesses would be quickly attracted to.

The subhead then spells out the system that shows you how you can create profit, and sell your products and services better than before.

So how does this affect your marketing?

1) If you're running a lead-generation campaign

Your first step may be just to get customers to opt-in. So you offer a product or service that can be sampled, and you get the customer's details and permission in exchange.

You don't try and sell anything. You simply get the customer's details. That would complete the phase of attraction.

You'd then move to the next step of conversion, by speaking not to the whole list, but only to those customers who've opted in.

2) If you're writing a book

You'll want to choose a really interesting name that gets my attention and curiosity. You don't need to cram the entire message in the book title.

You can lead the conversion factor in the subtitle, the back cover and the inside covers.

3) If you're writing a headline

Again, your headline needs to create the attraction; the idea; the curiosity factor. The subhead and the rest of the copy needs to convert you to the program or system.

The mistake most marketers make

They fail to understand the difference between the idea and the system. That the idea is the attractor. That the system is the converter. That if you mix up the two you, all you get is a mish-mash.

2) Remember that there's a gap between attraction and conversion. Customers need that pause to get them from attraction to conversion. Don't hurry customers through.

So how do you attract customers? Find out how to write headlines that work every single time, and you don't have to be a copywriter.