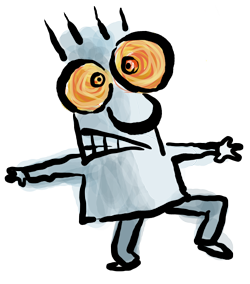 You may not realise it, but McDonalds has a cue.

A cue is simple. It's a trigger.

They started out with just going there because the kids were hungry and McDonalds was cheap (and salty and sugary). But mostly because the kids were driving you crazy. Suddenly, that one visit becomes a monthly, then a weekly. In certain cases, people stop over daily. And don't shake your head disparagingly, because you do the same all the time.

You stop for a coffee at your cafe

You brush your teeth in the morning.

And you may think there's not a jot of a connection between brushing, and coffee and McDonalds, but there is.

It's all based on cues

And the cue can be email

You can send them email and nudge them, but that's a cue waiting to fail. For several reasons. One, it depends on you to write the email, send it out etc.

And yes, you may be putting it on an auto responder service. But hey, imagine doing three months of emails back to back—if your course is 3 months long.

The other bigger problem is that email doesn't do what it's told. It doesn't always show up and dance in your face like it's supposed to. Sometimes it does, and at other times, it slinks away to the spam folder. Some days you'll be looking for something and find an email that's not even in the spam folder. It's just there, somewhere hanging out, waiting to be found. And that's not a good sign, is it?

In effect, you're creating a cue that's pretty iffy.

On the other hand McDonalds doesn't take the chance

You may think that McDonalds is designed to be the same because hey, that's easier for the company. And yes that was probably the original goal, but over time there's a good chance that McDonalds worked out—hey, that's the cue. You get into a place that looks exactly the same, smells exactly the same, and boof—now you're hooked. You're chomping that burger and fries without even thinking.

Amazingly this is what the brain wants: It doesn't want to think

We believe our brain is this amazing think tank, and so it is. But it doesn't want to think, because thinking is a waste of time. It's a waste of energy. It's easier to work on cues. If I see a chair, I will probably sit down. If I don't see one, I won't. Your brain doesn't want to have a board meeting on whether or not to sit down or stand.

And it's this non-thinking behaviour that causes us to do things without thinking.

Now imagine your clients showing up to your courses without thinking

And the cue is lost. But you see the day tick over, you feel the icky feeling in your mouth and then the brush whizzes through like it was the most natural thing to do.

Around the turn of the century, in America, most people just didn't bother brushing their teeth.

Yes, I heard you gasp.

But there were so many people with rotting teeth because of changing diets, that it was a national problem. Then along came a toothpaste, Pepsodent, and advertising provided the cue (it said: do you feel that film on  your teeth?) and away went the rest of America, brushing like it was the most natural thing in the world to do.

Most toothpastes had failed before that moment in time. Pepsodent found the cue.

And your group needs a cue

And that cue on a Psychotactics course is the group. As a participant, you're trained early to look out and look after your group. So yes, the sun has risen, the day has dawned, but the only people who show up again and again, and again are those who are wedded to the group.

But with the group helping each other out, you are not needed to do the nudging.

And that's when email plays a big brother role

Now if someone doesn't show up, you send an email. Now you use the power of one on one to rouse the person who's getting out of line (for whatever reason).  And in many cases, this email does the job but mostly it fails. If the person hasn't got the cue from the group, then we can safely write them off.

1) Have a cue, and let the cue be driven by the group, not by email.

2) Make your assignments daily and get the group to show up daily, thus establishing a habit.

3) Use email to drive home a point. To get people in line if they're going astray.

And the next time you put your brush in your mouth, remember that no one is making you do it. You didn't get a text message. No email. It's just that you woke up and yup, it's time to brush.

1) Black Belt Presentation Series: How to completely control the room—without turning anyone off?
2) New! Online Membership Sites: How To Build A Powerful, Community-Driven Membership Website