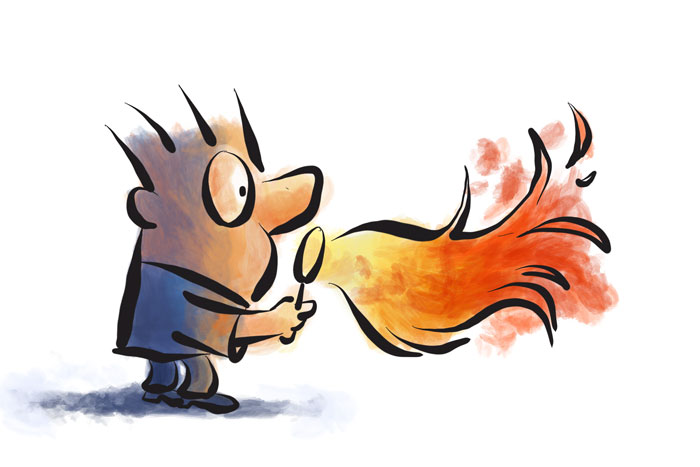 It's one thing to get attention, but how do you use it on sales pages? And can you use it in articles too?

In this second part, we see how the power of objections work for sales pages, creating information products and also when writing articles. It's real, it's practical and it works. Here we go!

Part 1: When creating a product, an article or a sales page, we don't think of the objection.

This article deals with a  question which David Greene asked.

David could start off the book with, “How do I get the lowest interest rates and other questions that cause mortgage problems.” See what happened there?

The biggest objection is: Look, I don't want to know about the other stuff. How do I get the lowest interest rates?

But now, by taking on that objection, putting it up front and centre, what we have is it gets the client's attention.

Now, David said that he doesn't want to take on that lowest rate question, but if it keeps showing up, then he's got little choice. Especially with an information product.

When he's in a consultation with a client it's easier to show the client, you know, this is what I can do, this is why it works for you, et cetera. But it doesn't work necessarily with an information product, and at least this is a good shot.

You create an information product where you can get right to the point, and once they have been hooked with the first issue, which is the problem with the lowest interest rates, then David can go deep into that objection and then choose to take on the other objections, or tackle other main points which are interesting, which are important.

It might be just a booklet, it might just be a short audio or some kind of webinar or web conference, but think of how can I take on the biggest objection, the objection that I get from my clients on a regular basis, and then, how can I make that the title of my book, of my web conference, of whatever I'm doing. Because that gets the attention of the client.

This is the first thing that we're going to cover with regards to getting the objection, how to use it in an information product. But what happens when it's a topic, like an article that you're writing?

Part 2: This takes us to somewhat of the second part of this episode, which is how to use the power of the objection when you're writing articles.

So we have to go through some fundamentals, and it's kind of the preparation stage where you learn to write outlines. Here's where the problem lies. I take about, I don't know, 10, 15 minutes and I can write two or three outlines. Sometimes even less than that.

And the client will take 45 minutes, 50 minutes, an hour to write three outlines. You think, “What is the problem here?” The obvious answer might be, “Well, you know, they're just starting out, you've been writing articles for a long time, and that's the difference.” And that's not the difference.

You don't need 60 minutes to do an outline, to create an outline. But how do I get this message across? Because if I bring that message to them that you shouldn't be thinking, they'll go, “No, no, no, no.”

And it would be nice to skirt the topic and not take it on completely because, hey, they're already doing something, you don't want them to think more about the thinking process. But that's the whole point.

The point is that when there is a big objection, and, you know, it doesn't matter what you're doing, what article you're writing, there are always going to be big objections. You think, “Well, let's take on this big objection,” because it's controversial. It gets your client's attention.

I mean, people think, “Yes, I'm going to use these outlines later,” but if you write outlines long enough you know that outlines are like vegetables. You cut them today and you can't use them three weeks later.

They just don't work. It sounds like a really bizarre example to give, but that's how it is. The energy that you have for an outline today can't be put into an article three weeks later.

So, really what's happening is we're going through the process of learning how to write outlines, and the goal should be, “How can I get this outline out as quickly as possible, as efficiently as possible, and so it ticks all the boxes?” But instead, people start to think, because they want to get the assignment right.

They want to not look foolish in any way. That's exactly where you can use controversy to get their attention to make that point.

Then I show them how thinking is very important in the creation state. You know, so, you're thinking, “Well, what am I going to put in this book?” You spend lots of time.

Most writers, most authors, most musicians, most whatever, in the preparatory stage they spend a lot of time. But there's also this other stage that we're going through right now.

So, to make a long story short, what I have to do is write an article that seems controversial, and once the client starts to read it, of course their hackles go up, but then I can bring across the points that I want to make.

And what we see is this dramatic drop in time used, in energy burnt, and as a result, they start to enjoy their work and they get better outlines and, hence, better articles down the line.

So what are we really doing here? What we're really doing is we're looking at the article that we are about to write, and you're going, “What is the biggest objection that comes up every single time?” You can take this with any article that you're writing and there will be a big objection.

And sometimes, or many times, you can make that the title of your article and start building from there and then work from that point on.

So, the objections become very crucial when you're writing an article or creating an info product, but, as I said, there was a third one, and now we remember, it was about the sales page.

Part 3: So let's go and see how we would use this on a sales page.

Again, the principle is pretty much the same, but let's see the application so that you can use it for your sales page, as well.

From time to time, Renuka and I will go to this little French bistro. It's in [Vermura 00:09:45], which is another suburb. We were sitting at the café, and my friend Vanessa, I don't see her for six months at a time, and then she just shows up on precisely the same day that we show up.

Anyway, so Vanessa and her daughter, Scarlet, they happen to be there at the same time. So, they were having their coffee and their French pastries, and then we were having our coffee, and then I was drawing on the iPad. And when they were leaving, Vanessa and Scarlet showed up and they were both admiring the cartoons.

At that point, Vanessa turns to me and she says, “Wow, I really like your work. I can't even draw a straight line.” Did you notice the objection in that statement? So many people have the same objection that on a cartooning sales page it needs to come up really quickly.

Now, if you read The Brain Audit and you understand the sequence of the seven red bags, well, it starts off with the problem, the solution, the target profile, then we get to objections. So, it's like fourth in the ranking.

But if you go to thepsychotactics.com/davinci you'll notice something quite weird. Very shortly after the headline and a little text, there's a video that suggests exactly that. It says, “I couldn't draw a straight line.”

That's the thing that people say every time you tell them, “Oh, you can draw cartoons, as well.” And they go, “No. Can't draw a straight line.”

Instead, you should go, “Okay, let's start off with a headline and then go straight to the objection.”

With David's information product, the objection is overpowering. This point of interest rates, that is over powering. That needs to be tackled. With the article about thinking is a waste of time, you want to create that change in behaviour, and, again, it's an objection.

They don't think that thinking is a waste of time, and so then you have to demonstrate it. And finally, with this third one on the sales page, all sales pages tend to bring up objections.

In some cases, it's hard to get people to believe what you're offering, like cartooning, and it's hard for them to believe that they could draw exceedingly well in just six months. So the objection needs to shoot up right to the top, or at least close to the top.

And that's the power of objections. They allow you to take on a customer controversial topic and to work your way into the hearts of your audience. Remember, your audience is usually saying, “Show me the proof.”

They might shoot you down completely at first, but you have to look beyond the obvious. Perhaps all they're asking for is for you to diffuse, perhaps completely remove their objections.