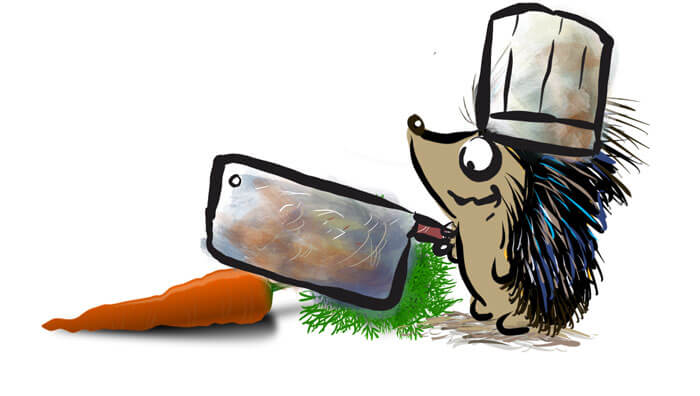 We're all told we should start with the end in mind, but we still get lost along the way.

Why do we go off track? Could there be some barriers that show up a lot before the end? Let's find out how we can stop focusing so much on the end and work on the barriers that block our progress.

Re-release: Why the “End in Mind” Principle Should Be Avoided When It Comes To Learning

Original: Why The “End In Mind” Principle Can Severely Impede Our Learning And Progress

There's something incredibly fascinating about the way chefs work.

A chef doesn't tend to cook for one person.

In a single night, that chef might need to go whip up anywhere between 50-200 meals. And we're not even necessarily talking about chefs you see in fancy kitchens.

You can walk into any food court or even roadside food stall, and it's the same story. There's flavour, taste and texture, despite both the volume and variety of the food.

It got me thinking: What makes the chef so very proficient at what she or he does?

The answer, strange as it seems, is they don't tend to worry about how the dish will turn out. Instead, they seem to obsess about the preparation—the prep work—instead.

You're going to need onions, tomatoes, some chillies, ginger and garlic paste and about five-six spices. It's at this stage that the professional and the wannabe seem to have plans that are diametrically different.

How do you chop an onion efficiently? Here's what you do:

A similar amount of preparation is involved in the skill of article writing, as well

A wannabe writer will look far into the future, towards how the article is written. That writer might even spend hours wondering how to start the article. But that's not what professionals tend to do. Professionals head right into the zone of prep work.

They know it's the preparation—the onions, the tomatoes and the spices of the writing—that's what matters. They work on getting topics together. They then realise that topics are too broad, so they move to the sub-topic and even to the sub-sub-topic stage.

When that phase is complete, they get into the act of outlining. Some scribble outlines in a matter of minutes, some colour their outlines with explicit detail.

What is the wannabe writer doing at this stage?

The wannabe is doing triple somersaults about what's down the road. They're eager to get past all of this nonsensical planning, outlining, topics and other blah, blah.

All of this prep work is somewhat of an obstacle, and the sooner they get over it all, the more likely they are to get to the finished work. But any professional will tell you that the endpoint tends to be the most straightforward bit. All of the energy goes into the prep work.

And this brings us to a critical point

The prep work can be truly exhausting. Writing an outline can take anywhere between 30-60 minutes. That's on top of the time taken for the topic or sub-topic. And that's not counting the story you're going to need for the First Fifty Words.

All of this prep work is truly frustrating at the best of times. Which is why the pros always focus on reducing the energy needed for the prep work. They know that if they can shave off the time taken to write a decent outline, they'll go from 60 minutes to 30, from 30 to 20, from 20 to ten—and even possibly just a few minutes.

If they work on getting stunningly fast at their preparation stages, the end product takes care of itself

If you want to find someone who struggles with their writing, drawing, cooking—or any skill—look at their preparatory stages. They're slow. They're inefficient.

They may still turn out a great product, but it's mind-numbingly energy-dependent. By the time they're done with their project, they have to rest, take long breaks. They dread starting up another project of a similar nature.

I was that person

If you look at my drawing today, you'll think I was always this good at cartooning. And the thing with cartoons is that it leaves a trail. Even if you don't consider yourself much of a critic, you'll see giant strides all of a sudden.

At one point, back in 2000, I was already a good cartoonist, but if you look at the work today, it seems remarkably superior. It's easy to put all of this down to practice because most of us don't see the prep work. But today, I put in more prep work than ever.

I'm continually adding reference material to my iPad. There are over 800 images that are like ingredients for when I finally start to draw. I'll have several cartoons in stages of progress, all waiting to see the light of day. I'll toss out ideas to my wife on our walk and see how she reacts, or I'll send it to friends via messenger and wait for their response.

And I do the same with my cooking. I cook a new dish for every meal. Unlike in the past, our fridge never seems to have leftovers, because we cook and we eat.

The process of prep work has become so energy efficient than having stale, and reheated food makes no sense at all. It's taken years to understand what makes some people so incredibly productive. If we're paying attention, we'll all eventually come to an unmistakable conclusion.

But I also want the daily log of the participants. I want to see how long they took to do the assignment. I want to look at how much time they spent on learning. I am more than slightly keen to read about their state of mind.

Are they dreading something? Are they overthinking ahead? Are they getting confused by second-guessing? All of this information in the daily log is more important than the assignment itself. It paints the detail of the prep work and how they're going about it.

This isn't to suggest that the end isn't important

Having a goal, even a hazy idea where you're headed is definitely the way to go. However, it's easy to place all your attention on the endpoint and forget that it's the tiny components that it's the prep work that makes the journey more fun, instead of more dread and drudgery.

To finish, let me tell you a story about John Wooden

You may have never heard of John Wooden. He was a coach. An excellent basketball coach. In the space of 12 seasons, he won 10 championships with U.C.L.A, putting him in orbit all of his own.

John Wooden holds the fantastic record for national championships in men’s basketball at ten. The next closest “competitors” are a couple of coaches who only managed a “paltry” four championships each.

At the start of every season, he taught every basketball player on his team to tie their shoelaces.

Surely there were better things to learn than tying shoelaces. But Wooden did it every year. And he had a reason why he went through this seemingly mindless routine. “Badly tied laces lead to blisters”, he would say. “And well-tied laces mean you don't easily get sprained ankles”.

Wooden wasn't focused on the final score. Instead, the prep work mattered. Take care of the prep work and becomes incredibly stunning at it, and the end—mostly the end will take care of itself.