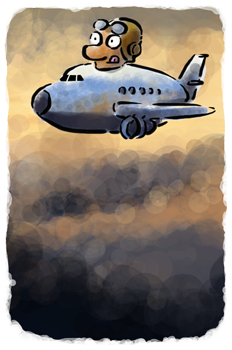 Well, eventually all those planes have to land, that much we're sure about

However, let's look at your business project list and see what's on it. That's the exercise I went through a few weeks ago and I realised that some of my “planes” weren't landing at all.

There was this cartoon project from 2010 which wasn't completed.
The book series on “Teacher vs Preacher”, not done.
The books on “The Talent Equation”, not done.
Our website which started two years ago, not done.

Don't get me wrong

While about 22 items were on the not-done list, a lot of things did get done. The Article Writing Course was completely rewritten with new notes, audio and assignments and came out in Version 2.0. The First Fifty Words course also went through a complete revamp and is in Version 2.0. A lot of projects got done, there's absolutely no doubt about it.

However, there was still the issue of those “planes” circling the airport. They were not getting done now, or from the looks of it, ever.

That's when I knew that productivity itself wasn't helping

Which is when it's not enough to just have breaks that last minutes or even days. That's when you need to carve aside an entire chunk of time to get the things you want to achieve. When we moved to New Zealand back in the year 2000, it was a big move and an important one. We needed to create space to make the move because it involved so many elements.

If you asked me back then if three months were needed to move countries, I'd say that we needed that much time at the bare minimum. This meant stopping work, stopping any kind of income (well, my income stopped but Renuka was still working for a month more, because she showed up a month later). What this seems to suggest is that we understand the enormity of working on what's important in our lives. We easily figure out how much time we need to create great work. And yet, we soon become hopeless at doing what's important to our lives.

When you have too many “planes” above your head, it's time to make space

We had the Article Writing Course and the Headlines course scheduled for late 2017. That's been postponed to mid-2018. And early 2018 doesn't have any new projects either. We've decided to land the planes and that includes writing the books and yes, finishing that website that mocks me every time I look at it.

The move to New Zealand was a setback when you look at it from the point of view of income. Yet, in time it proved to be one of the most important moves we ever made. In the past, we've dropped entire courses, like the year-long Protégé course. That could be seen by most as a setback because it meant a big drop in income. The reality is that it provided space to think and implement what was important, instead of just ploughing on madly. When you leave too many “planes circling” it also takes a ton of your energy, because you and I, we're both aware of the circling planes.

Will “landing the planes” lead to greater profit?

At Psychotactics, we've found that there is a loss at first in terms of revenue. The Article Writing Course and the Headlines course itself generates over $100,000. Even if you're doing very well in life, it's not an easy sum to walk away from. Will landing the planes cover that profit? The answer is no one knows for sure. What we do know is that in all the areas where we have landed the planes in the past, we've made space in the air.

We've had more time for ourselves, which is the most important gift of all, but to date that dip in monetary profit was soon replaced by something even more profitable. What I'm really saying here, is that when you look at the balance sheet, you may not make more money, but you're not likely to make any less either. The area where you will profit excessively is in energy and excitement as you land those planes.

Next Step: How do you slow down?
What do you mean by going nowhere?
And how can we slow down with our busy business and family life?
Find out more here: How To Slow Down (Without Losing Momentum)