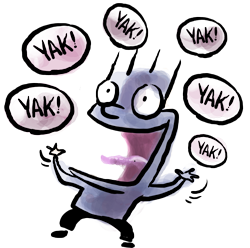 I remember flying to Pittsburgh in the year 2004

It was a 7am presentation in front of about 40 people who I didn't know. And who didn't know me, either. And by the time the presentation was done at 7:45am, I asked the crowd a simple question.

“How many of you would like to buy this product?”

I was new to sales and marketing back in the early 2000s. And I ran into this multi-millionaire called Brian Tracy. And his advice on sales was the best definition of sales I've ever heard. He said: Sales is a transfer of enthusiasm from one person to another.

Oh darn, so that's what was happening—enthusiasm was being transferred!

Indeed, I'd made a good presentation. Yes, the content was very interesting and useful. But it's the enthusiasm that caused people to brush aside the rest of the details and make a decision to buy the product.

But it's one thing to say “be enthusiastic” and quite another to do it. So how do you create enthusiasm?

The answer lies in a concept called “isolation”. It doesn't matter if you are selling offline or online, you can't be enthusiastic if you're bogged down with seven hundred features and benefits. So instead you isolate just one. Just like Steve Jobs did when he presented the MacBook Air. Instead of simply rattling off every feature, the drama was centred on just one thing: the fact that the MacBook Air was so thin, it could fit in an envelope.

There he is, standing in the middle of the forest, surrounded by thousands of trees, bushes, insects chattering endlessly and what does he do? He drops to his knees and he shows you a flower. And then his eyes light up as he goes into detail about that flower, while ignoring everything else around him. What he's doing is zapping that enthusiasm right into you, but he does so by creating isolation first—and then getting his message across.

Enthusiasm doesn't mean you have to be loud or boisterous

The best sales people aren't those who get in your face. Enthusiasm means you feel very strongly about that one feature of the product. So much so, that you're willing to drive home that point in detail. And if you're exciting enough, the audience feels this surge of excitement. Yes, your product has a ton of features, but they want that one feature, and they're willing to raise their hands for it.

This method of sales can be done both online and offline

Offline, you drive home the point in person by demonstrating or showing a particular feature. Similarly, online you pick that one feature and drive it home using more pictures, more explanations, thus isolating the importance.

Sales is a transfer of enthusiasm from one person to another

To feel that enthusiasm you need to isolate one feature of the product that's extremely exciting to you.

You then transfer this enthusiasm to your audience.

And then, like the Pittsburgh audience, watch as their eyes light up and their hands go up.

Do you know—Why To  Persevere Even When Failure is Certain (And When Not To)?