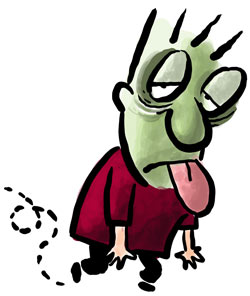 Where do we draw inspiration from?

When we try to beat resistance, we tend to look at what we haven't done and what needs doing. Yet sometimes resistance can be pushed over with a simple concept of inspiration.

In this episode we look at inspiration, but also at the “lousy carpenter” and “trigger” concept.

It’s said that a bad carpenter blames his tools

But what’s not said is what makes a good carpenter.

Let’s take my early battles with InDesign, for instance

InDesign is a layout program with which I do all my e-books and reports. I learned InDesign, but not quite well enough. So if I had to do a simple task like updating the Contents Page, I had to manually update it every time. If I added more pages to my document, I’d have to go back, and re-assign all the page numbers.

And even if you haven’t got a clue what I’m talking about, you get this feeling of stupidity coming through. Stupidity and hard work. And all because I refused to learn how to maximise the program’s capability.

No matter what you do right now, there’s a better way to do it. And there’s someone out there on the Internet who can help you find a better way. For all you know there are probably ten thousand tutorials and fifty videos on solving your exact problem.

It loves that you have great tools and lousy habits

Because if you did what I did with InDesign, it would take you thrice as much time to do the same job. Maybe even ten times as much. Well, guess what? If it takes you five minutes to do a job vs. fifty minutes, which job is going to tire you out? No prizes for guessing, but you’ve just opened the door for exhaustion to come rushing through.

And it’s not just exhaustion but frustration as well. If you did two jobs side by side, and finished a ton of stuff vs. finishing just one measly contents page, there’s no doubt which one brings more satisfaction.

The more dissatisfied and tired you are, the better resistance feels

It doesn’t have to do any work at all. You’ve been a complete nincompoop and done all the work yourself. You are the bad carpenter. You blame your tools when you should be working very hard to maximise the power of the equipment you have.

And let’s face it, you need better tools as well

If you’re running outdated tools, it doesn’t help. But we’re often just glitzy-eyed for the best tools without ever putting aside time to learn them well. But the question does arise: Most tools are so complex.

How do you get the time to learn them well?

The answer lies in doing continuous sweeps, kinda like a radar

If you try and learn something the first time, you only pick up so much. So you come back again for the second sweep, then the third, then the fourth and so on. I spent a lot of time (about a week) first trying to work out how to use InDesign.

Now I know it well, but I still spend a good hour or two every month to learn tiny bits of stuff. And it helps me improve my productivity. Of course, InDesign keeps getting better, so now not only am I faster, but I’m equipped with superior equipment.

It would prefer to see me swearing.
It would love to see me frustrated with just doing a simple contents page.
But nope, I won’t let it win. And neither should you.

Then you’ll earn more, because you’ll be in demand. And that will help you get the fanciest, most sophisticated tools that will put you head and shoulders above everyone else. And most importantly it keeps resistance away from your door.