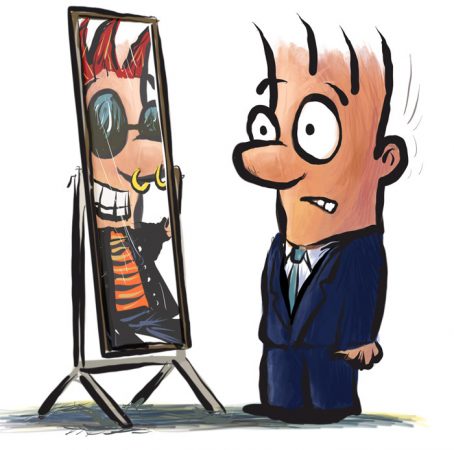 Many, if not most of us, have already experienced what it seems like to be a fraud in our mind.

Still we can't seem to shake the impostor syndrome. But what if we understood how the psychology works? Find out the twin factors ramming into you and me, and how we can avoid feeling like we're not worthy.

There seem to be two factors (I could think of) when it came to Impostor Syndrome:

Let's say you wake up in the morning and you brush your teeth.

All across the world, about 7 billion people are doing something similar—they too are brushing their teeth. But does it worry you that your technique isn't as good as the others? Even if you did know they had a superior method, it would barely bother you, would it?

Writing a diary, making a to-do list, going shopping—they're all individual acts, and in every situation, there's someone else doing a far, far superior job than you and me. But we don't even stop to think about it until the act becomes public. It tells us that the task may not be the problem and our perception of how we will be judged—that's the real problem.

And that's the first part of the impostor syndrome

We believe that our product or service is not worthy. That book, that report, that speech, that cartoon, that whatever we're about to create is someone not entirely useless, but it's exposed to attack. Or maybe someone else has written a blog post on the same topic. Or a book, or two books. Or done ten presentations.

What would our product or service add to the mix? How could it be different? And yet we know that information is like a camera. That every piece of information can be looked at from different angles, and still never get out of date, or be repetitive.

Our product or service shrivels in the light of day.

We like to keep it in the dark, where it's safe and private. But that's only our perception regarding the product/service. Even if the product or service is excellent, and we know it's okay, there's still mind-chatter. And it's the second issue: You are not worthy.

It's not like I hadn't made a presentation of The Brain Audit before. If anything, it was the presentation I'd made more than any other. I'd presented it at many venues in Auckland, then through the US, and at this point, many years later, I wanted to do a full-blown two-day workshop.

That's when I got the jitters

I prepared diligently, of course. But there's no way not to feel like you're an impostor. Why? In this case, it was because of the audience. Almost 70% of the audience were existing clients. We were on Version 3.0 of The Brain Audit, and many of these clients had read Version 1.0 and 2.0. They were part of discussions in 5000bc on the topic of The Brain Audit.

And there I was on the East Coast of the U.S. and had to present to these very same clients. Why would they NOT be bored? They'd heard all of this before, not once, not twice, but probably a dozen times. I sucked up all the reassurance I could get from my wife, Renuka, and still, I wasn't comfortable. I was feeling more and more like an impostor as I counted down the days.

Why the first break? It's because it was a benchmark moment for me. I realised at that point that no one was bored. No one was getting upset. I had these excited faces in the room. People who'd read every version were still getting great value from being at the event.

And why was this such a surprise to me? You can read a book ten times over and always learn something dramatic, even on the tenth reading. You can listen to an audiobook, watch videos and still find the experience of a live workshop to be far superior.

In retrospect, I shouldn't have been surprised at all, but I was. And it's only when the break rolled along that the penny dropped. My impostor syndrome had suddenly decided to go shopping for the rest of our trip.

When I launched the Dartboard Pricing series, I was nervous yet again. I'd written dozens of articles on pricing. We'd had so many discussions and clarifications in 5000bc. Why would anyone want to buy the books? I know intellectually that every experience, every iteration is different, but there's still a factor of impostor syndrome—or at least a genuine surprise.

What's important to note at this stage, is that it's not the content. It's not the product, the course, the workshop, the report. Not at all. That's not the problem at all. It's me.

There's only one way I know to stop this impostor syndrome

You've probably guessed the answer already. You have to bring it out of the darkness and into the light. This might mean selling your product or even doing a free event or course. Somehow that which was private needs to be made public. Real people need to see it, touch it, feel it, experience it.

In my case, I needed to get to the first break for The Brain Audit workshop. In your case, it might be sooner, or later, maybe by the end of the day or the project. However, it's only when it's done, and you've felt the reaction from your audience that you're going to relax a bit. You start to sense that your impostor syndrome is losing some of its power.

Not all impostor syndromes have happy endings

You may start with a lot of enthusiasm, eager to subdue the impostor, but you don't get an audience. We've had workshops where we showed up tentatively and had to play to an almost empty room. If you're starting in your career, you're more likely to have situations where your audience is tiny or even no-shows.

This impostor syndrome keeps coming back time and time again, and the only way to keep it at bay is to change your strategy and keep coming back persistently.

I know how it works both for the product and what's happening in my head. But it will be back. I know that for sure. I can't say when or why, but it will be back. And so will I. I refuse to give up, and that's the only defence I know.