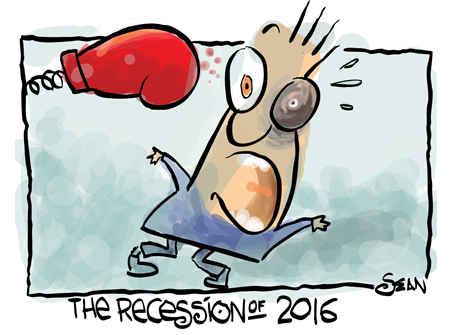 I was searching our website for articles on recession and came across this article. Funnily this article is as relevant today as it was in 2009.
—————————-

Waitasecond? The Recession of 2016?
What the heck? We're aren't even done with this recession yet.

And that's the whole point, you see.
You're so focused on your day to day activity that you can't see what's coming up around the corner. And in 2016, there will be a recession. And then again in 2023, and then again in 2030.

I'm no economist, and not even a student of economy…
But I know this. That every seven to eight years, everything goes crazy. Real estate agents drink Moet more than they need to; share brokers are anything but broke (couldn't resist that pun). And overall, things are hunky dory. And then comes the crash.

And the crash is like clockwork every seven to eight years
So who cares if you don't see a recession in 2016. It will be around in either 2015. Or 2017, or 2018. And if you think I'm being waffly, I'm not. Maybe this recession has caught you on the wrong foot. Maybe you're really getting battered. But you've got six, probably seven years to get rid of that black eye.

And then the recession of 2016 will roll along
And you'll be prepared. You'll have enough reserves to last a year, perhaps two. The real mark of a business isn't how much you earn, but how long you can last when there's no work to be had.

Preparing for bad times is not good enough
You've got to have enough for a whole year or more. And yes, you have every reason why that is impossible. And yet there are people all around you, from similar backgrounds who rise against similar odds.

Let me tell you a bit about odds
When I moved to New Zealand from India in the year 2000, I knew no one here. Try that for odds. I was afraid to spend $2 to buy the Trade and Exchange (a newspaper-version of Ebay). And I'd never been to New Zealand before. The economy was close to crappy.

The New Zealand dollar was at the lowest point in history (It's never been that low ever since). And I had no car. No contacts. And all our life savings of rupees converted to less than a decent year's wages that a person would earn in New Zealand (yes, life savings!). Talk about odds. And intimidation. And I've got story after story for you, and not just my own stories.

But within seven years, we've got to the point where this recession doesn't bother us at all. In fact, we planned to take 2010 off. It's just that 2010 came a year early.

You understand what I'm saying, don't you?
That 2016 is about seven years away. That if you really stop making excuses; that if you really work really hard; that if you get a mentor who can help you, then when 2016 rolls along you'll be prepared. Prepared to take a year, maybe even two or three years off, because of the sustained hard work you've put in.

The recession of 2016 is at hand.
Are you getting ready? Or not?