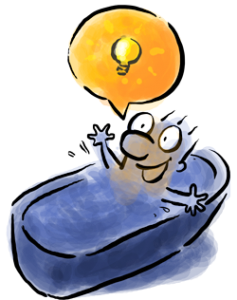 Imagine you had thirty-three seconds to pick up a glass of water, take it across the room, and throw the water down the sink.

Could you do it?

And you wouldn't need more than ten seconds to do the task, especially if the sink isn't very far away. Now give that very same task to a two-year old child and watch what happens.

Yup, kids of that age struggle with everything!

In fact, if that toddler spilt half the contents of the glass on your carpet, you wouldn't be overly surprised. So why does that toddler struggle so much? The reason for the struggle is because that child's brain is thinking of everything.

Well, for one, it takes up a lot of energy

When you picked up the glass, you didn't think about it, but here's what you did. You placed your thumb and another finger around the glass. Then the other fingers wrapped themselves mere seconds later.

A millisecond later, your brain was able to calculate the amount of water, the possible weight of the glass and enable you to accurately lift it from the table, without thinking about it.

This non-thinking zone is the plateau

Imagine having to think of everything: how we drive, how we walk, how we talk—how we do almost everything we do every day.

Our brains would quickly get overburdened with all the steps. That's because your brain needs twice as much energy than most other cells in your body. To have to think of every action, would be like the brain having to turn on every single light in a five-bedroom house all at once.

And all the time too. That's not only tiring but also a complete waste of energy.

So the brain makes the action as automatic as possible

You see this when you're teaching a course, for instance. On the cartoon course, we start off with a new assignment and there is nothing but groaning and moaning as the participants take on the task of learning.

But about four days later, after some practice, their brain works out the mistakes and makes the task mostly automatic—especially if it's a a small task. When we learn many such tasks and understand the sequence of these tasks, we plateau.

So for most of us, driving a car isn't a problem

Most of us could be woken up at 2am in the morning, and still drive. We could be given half a bottle of wine, and yes our driving would be impaired, but we would still be able to drive. We could juggle eating a banana, scream at the kids in the background, speak on the phone—and generally be a super-hazard to ourselves and others—but still drive.

That's because most of the elements of the driving routine are automatic. No more learning is required unless you run into a new situation. And while this is ‘automation' is exactly what we need, it's also a super-curse.

At this point, you feel comfortable, and you stay well within that comfort zone. So for instance someone on the cartooning course, would be easily able to draw several cartoons in a space of 6-9 months of instruction.

A cartoonist that is in the plateau-zone would find it hard to understand the concepts of tones, focal point, spot colour, balance of vertical and horizontal, variation contrast, consistent humour, broken lines, perspective etc. Even those very words would put sheer fear into their brains. They would want to stick to the core of lines, emotions, possibly some perspective.

Sure they can draw, but the process of drawing is being done without thinking. It's second nature. Automatic.

And that's the plateau

The only way to get out of that plateau is to keep pushing the boundaries. As your brain slips into auto mode, enjoy the ride for a while, then go back into manual. And that's when you get smarter. But of course, this requires your brain to switch on all those ‘thirty lights'. It's a queasy, uncomfortable feeling. So most of us head back to our automatic transmission. And that's the difference between pace and potential.

If you truly want to soar, you can't go at pace forever

You have to find your potential. Any two-year old can tell you that.

P.S. All this nonsense about how we ‘can’t remember names, can’t draw, can’t cook, can’t dance, can’t write’ is just that: nonsense! It’s a life that’s being lived at pace, not potential. The plateau is a great place to be for most of the time, but sometimes go up in the mountains. It’s heady up there!

Do you have a question or comment? Write it here and I will respond.

5000bc Members: FREE Course
FREE—The Website MasterClass. (Currently sold at US$ 2445)
The Website Masterclass is a comprehensive course containing audio, detailed notes, and an insider information of the exact steps you need to take to make your website a powerhouse!

Note: If you're a 5000bc member, login to 5000bc.com for more details on how to get this course complimentary.