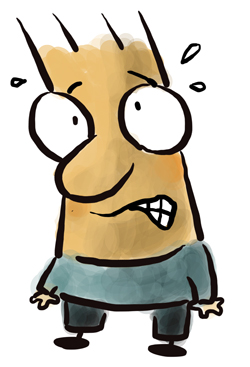 Have you ever been to a primary school play?

There they are, all the kids, all keen to play their part.

And then one kid forgets his part

He stands there dumbfounded. Unable to speak. Frozen in fear. The words seemingly circulating in his brain somewhere.

I was that kid!

Except I wasn’t five years old. I was thirty-three years old and I was giving my first presentation ever on The Brain Audit. Except at that point, it wasn’t even called The Brain Audit. I was, at least in my mind, just giving a one hour seminar.

And about twenty minutes into that one hour, I froze

Nothing. I couldn’t remember a thing. There were twenty five people in the room looking right at me, and my mind was blankety-blank. And time doesn’t just slow down in these moments. It shuts down. You feel suffocated, unable to move or even twitch an eyebrow.

My wife, Renuka saved me that night

She told the audience we were going to take a 10-minute break. Imagine that. A 10-minute break in the middle of a presentation. But there I was ten minutes later, my brain all rebooted. And I gave my first presentation on The Brain Audit ever. But that was my first ever event. Sure I goofed up. But then I was fine.

Fine until Wellington, that is

I had to speak to this group of insurance agents. One hundred and fifty of them. And I was being paid the grand sum of $1500 plus airfare + expenses. And though it was at least three-four years later and forty presentations later, I did it again.

I became that five-year old on the stage again

My 45-minute speech was done in twenty. And I fled the stage. I was mortified because I forgot what I was supposed to say. And I knew in that moment, that I really should stop trying to be a speaker. Heck I might as well go and hide behind my computer and never show my face again.

Moments of doubt creep up in everyone’s mind

But this isn’t a moment. This is a crisis. You’re being mangled, pulverised and every bone in your body is telling you to eject, eject and eject.

And yet you stay on course. You feel the anguish, the shame, the utter doubt. And then when you’ve done enough of your self-pity, you wake up the next day (or several days later) and you get back to doing what you need to do.

What I needed to do was go back to Wellington

Back to that same hotel. Back to that same stage. Back to face a fear so strong that even though I wasn’t going to be speaking to the same audience; or even speaking on the same topic; or the fact that several years had elapsed. I was still petrified of—get this—the very room!

But that’s what you have to do

The only way to face the fear is to face it. You pick yourself, dust yourself off and start all over again. That’s what marks out the people who succeed vs. the people who don’t.

The people who don’t make excuses. They say: I tried this stuff. It didn’t work. Well hello there, try it again. And again. At least so that you get over the fear. If for no one else, then at least for yourself.

Because the moment of doubt doesn’t care

As you get better at what you do, you have more challenges. Some challenges you breeze through. Some make you feel five again. Fearful. Blank. Unable to go on. But you must go on, because if you do there is that so-called pot of gold waiting at the end of the rainbow.

Remember The Brain Audit presentation I was telling you about?

Well, at that point I hadn’t written The Brain Audit. But after that event, someone came up to me and asked me for notes. Of course I didn’t have any notes. But she persisted. So I wrote out the notes a few days later and sent it to her in a PDF. Those notes became the basis for The Brain Audit as it is today.

And today that one book alone has sold over $500,000 worth of copies to date.

One book. Half a million dollars!

In my wildest dreams I could not have envisioned a turnaround like that. But it could have gone the other way as well. I could have given up. Decided to go into early ‘retirement’. And that would be the end.

When you’re doing a course. Learning a new skill. Doing something different or scary. And the longer you wallow in self-pity, the more stupid excuses you make, the more that doubt is going to chew you up and spit you out.

Be that five year old

Freeze in fear if you have to. Take your ’10-minute break.’

Then come back to fight.

P.S. So what was your scariest presentation moment? And how did you overcome it? Share your experience here

NEW PRODUCT! Learn How To make your Presentation stand out from every other presenter.