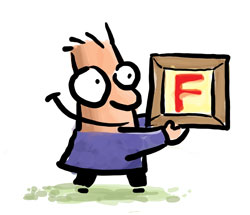 Imagine a daughter who's about to utter her first word

For a long time her expectant parents have been waiting to guess what that first word would be. Would it be ‘dada' or ‘mama'? Or something else altogether?

And then she says it!

And there are whoops of joy. Except this daughter is not really a baby. She's a woman at the ‘ripe, old age' of 35. And there's nothing wrong with the woman at all.

She was just waiting for the right moment to say her first word.

Yes, I know it's a ridiculous story

But it's not any more ridiculous than you waiting for the right moment to publish your article. As we go through writing articles, we believe that our articles aren't quite good enough to post on our websites or blogs. So we salt them, in the hope that we'll write better articles in the future.

If I'd waited for the future, you wouldn't be reading this article

When I started writing articles way back in the year 2000, I struggled with my articles. I didn't feel they were good enough. And besides I had one massive problem. I felt like a fraud, because I was a cartoonist and knew nothing about marketing. But I'd read an article in the Reader's Digest when I was a child. The title of the article was “Be brave and mighty forces will be with you.”

So I gave in to mighty forces

I published my articles. And to my surprise, others not only wanted to read them, but wanted to publish them as well. And while it took us over a year back then, over a thousand people subscribed.

One thousand people were reading my ‘crappy' articles

And it didn't stop there. I then wrote this document called The Brain Audit. It was only 20 pages long, including some fillers <grin>. And at first it was a trickle of customers that bought it, but soon we had hundreds of people buying it.

I'm sure you've heard this story before but we'd sold over $50,000 worth of The Brain Audit in that form. And it was only then that it got upgraded. (Today The Brain Audit is 180 pages and far more polished).

But what if I had waited for the perfect moment?

What if my articles still needed polish?
What if I had believed that The Brain Audit was too anorexic to publish?

Be brave and mighty forces will be with you.
Go ahead, publish your stuff.
Be brave—then be surprised.