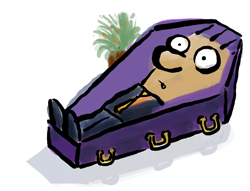 In the year 1990, Jerry Seinfeld said something interesting.

He said: “Surveys show that the #1 fear of Americans is public speaking. #2 is death. Death is #2. That means that at a funeral, the average American would rather be in the casket than doing the eulogy”.

And almost immediately everyone took this statement to be gospel truth.  And the quote “Public speaking is more painful than death” went into our common terminology.

No one asked who did the survey? No one bothered to ask who they surveyed. No questions were asked.

But how can you ask questions: The statement was made in “Seinfeld”—the comedy show

In that very same comedy show, Jerry also said, “Anything's possible.” But did you pay attention to the “anything's possible” line? Noooooo you didn't. Instead you believed that speaking in public is truly worse than death.

Well so is putting out an oil fire

So is getting stuck in the elevator for the weekend.

So is learning how to write copy for your sales page.

They all seem worse than death. And yes there are surveys to prove the point (heh, heh).

But waitasecond, there are people who do all of the above every day of their lives

And our natural assumption is that those people must be talented in that particular field. They must have some gift we don't. Sure they have a gift. It's called the gift of practice. Incessant practice. And it's possible that you may be rolling your eyes, because it's not like you haven't practiced, but you still fear public speaking worse than death. So stay with me a second.

Are you shy when you speak to your pet?

Are you shy when you speak to your friend?

Are you shy when you speak to four or even five of your friends?

So why is it that when you have to give a speech to five of your friends in a formal setting that you fear it “more than death?”

The answer is simple. You don't do it every day

You speak to your pets incessantly. You yakkity-yak with your friends at will. And yet you struggle to give a speech to the same friends (let alone a whole bunch of friends or strangers).

So let's see what you're up against in this speaking scenario

1) You have to be able to speak with flow (presentations are not like normal speech. They have a structure).

4) Worse still, you most often don't have to speak to friends, but speak to a bunch of strangers.

Is it any reason to suggest why you would not fail at making a great impression?

You have to master at least four different disciplines before you can even start to make sense. Muck up the flow, and you look like a dolt. Say something boring and you freeze in your tracks. And structure, ooh, just mastering structure is a task in itself. And let's not forget that you can't ramble on forever because those strangers are not going to be as forgiving as your friends.

The myth of talent stems from the fact that some people are excellent at doing this stuff. They were born with the gift of the gab. Yet look around you and list the world's most well known speakers.

Chris Rock (comedian), Al Gore (Ex-politician), Bill Gates (Big shot at Microsoft), the late Steve Jobs. Look everywhere and you'll see that those you consider to be well known speakers are often painfully shy people. They rarely like to mingle with people, let alone speak to them. Yet they get on stage and they speak to hundreds of strangers. So how do they do it?

Then you get it and can write articles on demand. Drop you in a pool and you'll drown. Put you on a bicycle and you'll fall to the earth repeatedly. But give it enough practice and the brain eventually learns.

But it's not just practice that counts

It's repeated practice. Almost over and over again. In quick succession. And the more often you practice (read: daily practice) the more this becomes second nature. Which is why you can speak to your friends. You've been practicing that from the age of two or younger. Which is why you can walk. Or write. Or draw (oops, cancel that one out).

People fear speaking more than death, because they latched on to some random comment on a Jerry Seinfeld show.

Well, latch on to the other statement too: “Anything's possible”.

If you practice every day. Yes, everyday!

Note 1: When I first started public speaking I was terrified. At one of the earliest events, I forgot what I had to say. And I spoke to an audience that consisted of 50% of folks who knew me. I had to take a 10 minute break in the middle of my speech just to get my composure and my thoughts back in place.

Of course as you can tell, I was terrified of speaking. Since then if you've been to any of the Psychotactics events or seen me live at other events, you would find it hard to believe that I was ever scared of speaking. Yet I've been terrified enough. In the year 2006, I was called to speak at a paid event in Wellington, New Zealand.

Despite having years of experience under my belt, I forgot what I had to say. Have you ever had over 100 people in the audience and you're standing on the stage and freeze? I was so afraid that I didn't want to even visit that hotel again. But two years later I did speak again at the very same venue.

Even now, when I'm doing my own events on topics such as The Brain Audit (which I know like the back of my hand) I still practice 5-6 hours before the event (Consider that the event starts at 8am and it will give you a good indication of when I wake up to practice). Do I fear public speaking more than death? I don't because I've learned how to beat the fear.

Note 2: A friend of mine shook like a leaf when she spoke at her networking meetings. She's a perfectly confident person, but she'd get the jitters every time she had to speak. She used EFT (Emotional Freedom Technique) and was able to speak without being afraid. Sometimes it may need more than just practice. But there's always a way—or there's a will.

P.S. I am sure you have a public speaking disaster or success story. Why don't you share it here.

1) Don't Miss! You already know that 80% of a sales letter depends on your headline.
So what's the remaining 20% that causes customers to buy? Find out more

5) Chaos Planning
Year after year you sit down and create a list of things you want to achieve. Then suddenly it's July, and you've not really moved ahead as you'd expected.
Learn Why Most Planning Fails: And The Critical Importance of Chaos in Planning.