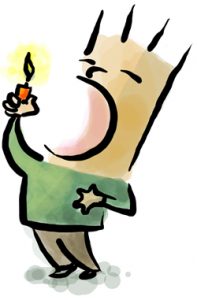 Or you could take a totally different route, and avoid the frustration of everyone introducing themselves. You could make the person sitting next to them do the introduction.

So how does this system work?

In effect, no one does their own introduction. All they do is talk to the person next to them. So if X and Y are sitting next to each other, X introduces Y. And in turn, Y introduces X.

Why is it important?

The reason why we hate introducing ourselves, is because we have to talk about ourselves. That alone is kinda boring for at least half the audience. But the second biggest reason is that the spotlight is on us.

We have to talk about ourselves and make ourselves look good. We're doing a tightrope act where we can't undersell ourselves—or boast too much. This is all too much to bear, and we often end up goofing it up. This makes us even more nervous the next time we have to introduce ourselves.

But the nervousness gets reduced when someone else is introducing us

This is because that ‘someone' can not only boost us a bit, but they don't need to have to remember anything. You see, when they spoke to you, and asked you questions about yourself, they would have made little notes. When they are called upon to introduce you, they simply refer to those notes. So they don't have to remember anything and hence the nervousness goes away as well.

Just asking X to introduce Y is not a good idea. When we conduct live Psychotactics workshops, we make sure that there's a clear structure to follow. e.g. The questions that X needs to ask Y would be something like:

That gives the participants a clear structure to work with. They're not randomly asking each other questions.

But can't we just skip the introduction session if it's so hated?

Yes you can, but you'll find that your audience gets very disoriented. The introduction is a very vital part of who we are as humans. We like to know about each other, even if we don't particularly like to introduce ourselves to a crowd.

But create a bit of excitement around the introduction and it's not hated at all. Be sure, however, not to do silly things like making the person stand when doing the introduction. Let them be relaxed and they'll thank you for it.

Introductions are hateful because of the way they're conducted

If you turn it around and make Y introduce X, and X introduce Y, you get a much better result. It takes the nervousness out of the situation, allows us to refer to notes—and best of all it gets X and Y to know each other a lot better. Plus it enables the entire group to get to know everyone else, so don't be surprised if you get a ton of laughs and a relaxed atmosphere.

And this sets the tone for the rest of the workshop

Your group is now introduced to each other, have had a few good laughs and are now ready to learn. What was once a pet hate is now a wonderful experience. And all it took was a few tweaks and voilà, your workshop is well on its way to rocking and rolling!

P.S. What techniques have you used to get people to introduce themselves at your workshop? And if you attended a workshop, what technique did the presenter use?

The Black Belt Presentation Series: Learn how to make your Presentation stand out from every other presenter.