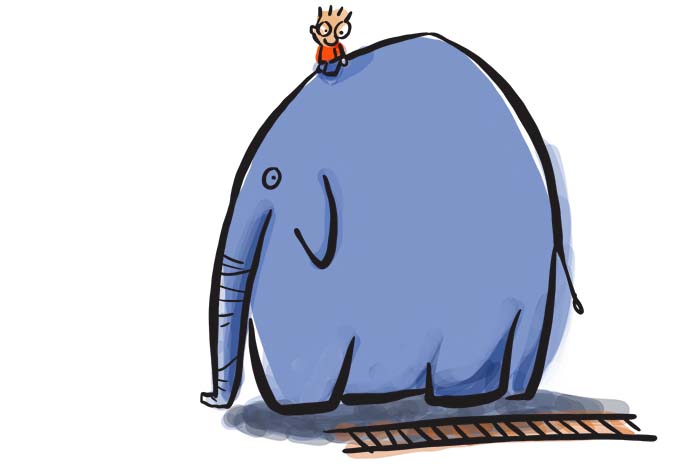 Most of us believe we have to start a business.

Hence, we get all fancy with business cards and websites. We talk about how we solve problems. And then—then we hear nothing. Clients should be rushing to avail of our products and services, but it's nothing. Why? Because the risk is too high.

You and I are unknowns, remember? But what if you created something low-risk. Something low risk for you and just as low-risk for the client? Something like a doorway. Let's find out how you can get your foot in the door, shall we?

I'll tell you three stories, and you tell me what's common between all three.

When I just got to New Zealand, the only person I knew in this country was a cartoonist. And I wanted to stop cartooning and move into marketing as a career. Hence I joined a networking group that met every Friday by the waterfront.

However, I was a complete unknown, and despite telling people I was in marketing, I wasn't able to get any work for several months and had to depend on cartooning assignments instead. Then, one day, I went to meet with one of the members of the networking group.

I asked her what she did for a living. Her answer was rambling and left me more confused than ever before. I decided to ask her some questions, and when she answered those questions, I reorganised her answer into a line or two and checked if that's what she did.

“Your two lines are better than anything I've ever said”, she exclaimed. And from that moment on, whenever I went to meet with members of the group, I would try out the same exercise. The results were identical. “You say it so much better than I do”, they would exclaim in genuine surprise.

When I left college, I was clear about what I wanted to do. I wanted to be a creative director at an agency, like my idol, Christopher Rozario. Hence, right after college, I went to a copywriting course but was horrified at how little I learned about copywriting. The advice we got at the end of the course was just as unsettling.

We were told to “find a small agency to work with” and then move up from there over the years. To me, this made no sense. I would never get a chance to work on the big ad campaigns if I got stuck with some tiny agency.

Hence, I made an appointment with the Chaitra Leo Burnett agency, one of the largest in Mumbai. When meeting with the art director, I had no work to show—well, nothing that would impress her anyway.

However, I did have my cartoons. “You realise,” she said to me, “that cartoons and copywriting are two completely different fields.” I agreed but asked her if she would take a chance on me. “How about I stay for a month, and if you like my work, I'll stay”. She agreed, and I was in.

That's Story 2—see anything common yet? Let's head to Story 3.

I've been recently obsessed with documenting life as it happens in Auckland. And one of the things I wanted to do was take pictures of the fire crew at the fire station.

Most people aren't exactly keen on photographers poking around. And fair enough, because a picture can tell a good story—or a rather unsavoury one.

However, the biggest reason why people are reluctant is that they believe you'll just take up their time. They see no value in the pictures, and you're just likely to get in the way.

“Can I come across for just about 30 minutes”? I asked. The e-mails flew back and forth, but after two months, I was called to take pictures. I went on Day 1, then went back on Day 2.

As if that were not enough, they referred me to the main fire station. And recently, they e-mailed, asking me to show up again.

Okay, so that's the end of the story. But what's the common thread?

The answer is the doorway. And let's call it the “doorway principle” to keep it all nice and interesting. The doorway principle is just about getting your foot in the door and seeing what unfolds from there.

The opposite of the doorway principle is when you either think you have to create something grand or do something amazing to get the attention of potential clients. In reality, the grander and bigger your plan, the more they feel the risk.

In the case of the fire truck, 30 minutes was manageable. With the first ad agency, working for a month wasn't too bad (especially because I wasn't being paid anyway).

And with the members of the networking group, I didn't promise any big marketing plan. Instead, in all three instances, it's been a small, doable, low-risk entry.

Too many of us are swayed by the fact that we need to run a business.

Yet, most businesses start off as tiny doorways. Apple—for instance, was just a couple of guys putting together a computer. Sony was a company that made radios.

Mailchimp was started because the founder, Ben Chesnut, decided to build a tool for e-mail newsletters. Apparently, he hated designing them.

Lynda, from Lynda.com, didn't start off with a big membership site full of tutorials. Instead, she barely kept ahead of her students, teaching them HTML, then making videos on web design.

There are tens of thousands of companies that didn't start with a business and instead had merely a doorway.

In many cases, they didn't even realise they had a doorway and just tried to solve the smallest possible problem. Why not do the same to get going?

How about trying to find the smallest possible component that you can manage? That becomes your doorway, and it's very low risk for clients as well.

Our membership site at 5000bc has been running for close to 18 years.

It didn't start as a membership site. It started out as a way to answer questions related to The Brain Audit, a book I'd written. And The Brain Audit itself wasn't even a book. It was just a 30-45 minute presentation I'd give to convince people that I had some sort of marketing knowledge.

What can you do today?

Or at least in the next week? Something small, manageable and preferably low risk both for you and your client. Sure, you can build a business down the line. For now, however, let's just start with a doorway.