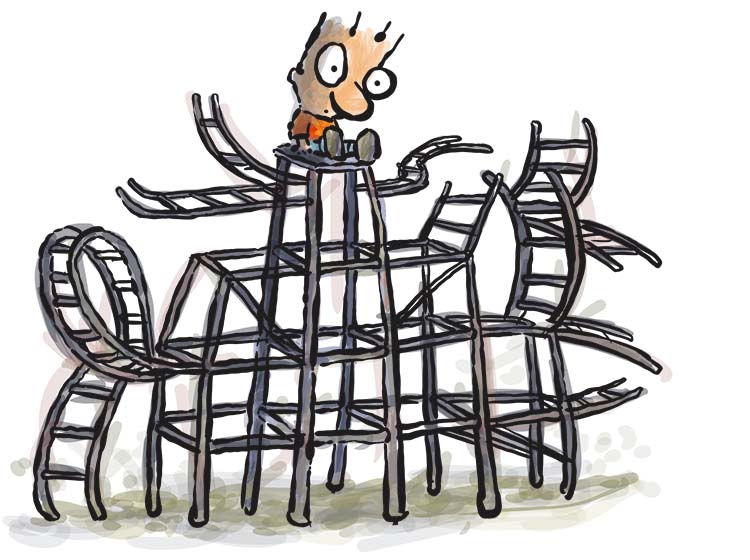 How do you tell a story effectively?

How do you decide which facts to keep and which ones to drop? Why do you have a bloated story?

Winter started as it usually did, but spring never came. Instead, the weather stayed cold. While Europe waited for the warmth of the summer, they got snow. Autumn was cold again, and then Europe slipped into winter yet again.

The reason for this unusual occurrence was the eruption of a volcano called Mt. Tambora, which is located in Indonesia.

Early in April of 1815, the volcano erupted with immense force sending particles of sulphur high into the atmosphere. It’s important to note that Earth’s winds stream from the tropics—where Indonesia is located—to the poles.

This is why those particles of sulphur were transported towards the polar south and north. As the northern regions moved into spring, those particles hung around, blocking or scattering the light.

A volcano that erupted in 1815, thousands of miles away, caused Europe to have no summer in 1816.

Notice how you kept reading the information above without a pause?

Even if a week passed, and you were asked: “why didn’t Europe have summer in 1816?” you’d be able to give most of the details. You’d be likely to say:

Now let’s step back and put in just a few details that make life more difficult.

We’ll run through the same story but add a touch of information.

Winter started as it usually did, but spring never came. Instead, the weather stayed cold. While Europe waited for the warmth of the summer, they got snow. Autumn was cold again, and then Europe slipped into winter yet again.

The reason for this unusual occurrence was the eruption of a volcano called Mt. Tambora, which is located in Indonesia. Indonesia is the largest archipelago in the world.

It consists of five major islands and about 30 smaller groups. Together, Indonesia comprises 17,508 islands. One of these islands, Sumbawa, is where Mt. Tambora was situated.

On 10th April 1815, the volcano erupted with immense force sending particles of sulphur high into the atmosphere. Rather than a slow, steady broadening of the equatorial cloud into the Northern and Southern Hemispheres, the cloud expanded in fits and starts.

As some pieces of the cloud were blown away from the equator, they were quickly caught up in the dominant stratospheric jet streams, which in May blow east to west in the Northern Hemisphere and west to east in the Southern Hemisphere.

The cloud soon began to resemble streamers or filaments, with small portions regularly pushed off the equator and into the middle latitudes in each hemisphere. Eventually, these filaments formed a single set of clouds that covered Earth.

And there they remained. Had the aerosol-cloud ascended only into the lowest part of the atmosphere, the troposphere, where clouds form, rain would soon have cleansed the ash from the air. But in the more stable stratosphere, conditions prevent the formation of clouds of water droplets.

Those particles hung around, and as the northern regions moved into spring, they blocked and scattered the light.

A volcano that erupted in 1815, thousands of miles away, caused Europe to have no summer in 1816.

If you read the above paragraph just once, what would you remember?

Did you recall it was the island of Sumbawa?

What about 10th April? Did the particles of sulphur hang around in the troposphere? Or was it the stratosphere? You probably didn’t realise that Indonesia comprises 17,508 islands, but was it relevant to the story?

These details could be easily drooped, making the story memorable a week, maybe several months from now. Yet time and time again, writers tend to stuff their articles with reams of information.

Take, for example this story about Pepsi that showed up in my inbox

During World War 1, Pepsi was in deep trouble. Sugar rationing meant Pepsi didn’t have enough sugar to make their syrup. Pepsi was already selling in 24 states in America and doing brisk business. But lack of sugar meant deep losses.

After the war, sugar prices went up even higher – from 3 cents to 28 cents. And unfortunately, when sugar prices were at the top, Pepsi placed a huge order for it – more than they required for their soft drink. The bet on sugar that went wrong bled them to death. And by 1923, Pepsi had to file for bankruptcy.

But before filing for bankruptcy, Caleb Bradham – the pharmacist who started Pepsi – asked if Coca Cola wanted to take Pepsi over. His offer was rejected.

And Pepsi’s assets were finally sold to Craven Holding Corporation for $30,000, before Roy Megargel – a wall street broker – took it over from them for $35,000 (equivalent to about half a million dollars in 2022.)

Megargel never managed to turn Pepsi around. And when the Great Depression occurred in 1929, his struggles deepened. Coca Cola was again asked if they would like to buy Pepsi. And again, the offer was rejected. Pepsi went through its second bankruptcy.

During this time, Charles Guth, the president of Loft – a candy manufacturing company that ran a network of 115 stores – asked Coca Cola to give them a bulk discount to sell their soft drink.

Loft was buying 31,000 gallons of syrup from Coca Cola every year and so, Guth thought that he should receive a bulk discount that wholesalers receive. Not getting any response from them, Guth went and bought Pepsi assets using his own private funds from the bankruptcy proceedings for $10,500.

When Loft replaced Coca Cola with Pepsi in their stores, Coca Cola came after them with inquiries as well as legal threats. And Guth asked them to buy Pepsi from him for $50,000. This was the third and the last time Coca Cola rejected the acquisition offer!

Just five paragraphs but let’s list the details, shall we?

There’s more, but I’m going to stop right there.

While the story spans five paragraphs, the details overwhelm you in the first paragraph itself. By the third paragraph, when I stopped, you can’t keep track of the story. And it’s not a very complex story either.

Do you remember the details in any of what’s to follow?

The problem with details is that they look very cool on paper, but it’s very tiring for the reader.

This Pepsi story went through about 14 paragraphs, each littered with facts and details. By the time I reached the end, I couldn’t figure out what the writer was trying to say.

My brain had been through the minefield of fact after fact, and I was shell shocked. However, while this is an extreme example, even the most minor bits of information can be too much.

In the Mt.Tambora story, certain elements were crucial.

You needed to know:

Try removing any one of these elements, and the story doesn’t seem so coherent. This brings us to the point of “how do we know how much to edit”?

The answer depends on the goal of the story. Let’s say we took the date: 10th April 1815. In my version of the story, it’s not needed. But what if something happened on 11th April? Or a week later on 17th April? Now the specific date matters and can’t be left out.

If my story was to talk about how a smaller explosion would have been a lot worse, then bringing in the troposphere and stratosphere would matter. It’s not just a question of leaving out information. It also depends on where you story is going and how the facts relate to that story.

The good news is that you can quickly test how an audience will react to your story.

When I have a story I’m excited about, I tell it to anyone that’s around

I might do it while in the car with my wife, Renuka. Or I might have my nieces pop in after school, and I tell them the story. They will often ask me a question if they’re unclear about a fact. Or they will seem confused if there are too many details.

If I’m particularly unsure, I may ask them to repeat it to me. Whether you’re dealing with an adult or a ten-year-old, they’re very good at stripping out the stuff that’s boring or difficult to remember. I pay attention to the bits they keep, and it forms the core outline of the story.

Even if you don't have anyone else to bounce your story off, you can manage by listing the details

Instead of sitting at a computer and typing your story in a paragraph form, sit down with a pen and paper. List the main elements of the story and see which details are irrelevant.

You'll find a lot of figures, dates and especially obscure names can be left out quite easily. In bullet point format, you're forced to keep only what's important and why you think it's so crucial to the telling of the story.

It’s also good practice to listen to other storytellers.

Comedians tell stories in small, precise clips. If you get onto YouTube, you might want to watch “Live at the Apollo”, where comedians get on stage in London.

After listening to a story, press pause and see how much of the story you can remember. You’re likely to find that there are few confusing facts and that you can recall almost all of the essential details.

A combination of telling stories and listening to a LOT of stories is what will allow you to become better at your storytelling. Knowing what facts to drop and which ones to keep are the key to writing great stories.