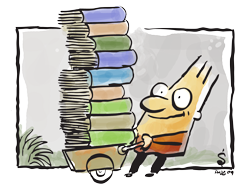 Have you heard the song “New York, New York”?

It's a song made popular by Elvis Presley, right?

Of course not. You probably heard the Frank Sinatra version of it. But what if Elvis sang the same song? Or maybe Lady Gaga? Would the audience avoid listening to the song, just because it has the very same lyrics?

That's not the case at all. In fact, every hit (or even some obscure songs) are covered by other artists and are extremely well-received. In effect there's nothing unique about the lyrics at all, just the way it's presented.

Which gets interesting when you're writing an article about dog food

As you scroll through seventeen million seven hundred and twenty one articles on dog food, you may not feel inspired to put one more article into the mix. And you'd be wrong. Because when you write an article, it's a lot like an artist singing a song. What matters isn't the content, but how that content is presented.

This, of course, doesn't give you the license to copy everything in sight

But it should give you the confidence that your audience is keen to listen to your own voice. The way you string your words, your own quirky sense (or lack of) humour. All these little things that make the article different, is what the audience is desperate to hear.

In many cases, you'll be writing about something that's not so very unique. In other cases, your content may well be unique. And there will be times when you feel your work is unique, only to find that it's been covered before.

And yet, there it is

And yet, there it is

Your idea has been replicated by someone else. That cartoonist didn't set out to copy you and you didn't set out to copy the other, but you still ended up with something remarkably similar. But what's interesting is that both your audiences loved your work. And even if the work happened to be printed side by side in the very same newspaper, they would still love it.

You're getting the point, aren't you?

It's not what you say, it's how you say it that counts.

Now go and write that article, because you do have something to say. And your audience wants to hear it.

One of the best ways to write an article is to tell a story.

But how do you know if your story telling will be powerful enough for your reader? Storytelling has a lot of guidelines and rules.  Find out what are the ‘Three Unknown Secrets of Riveting Story Telling'.