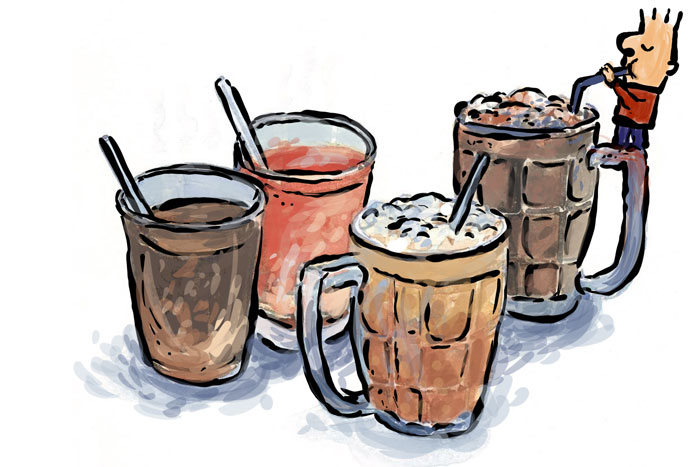 Luck it seems, is fickle? Or is it?

How come some people are lucky (or as the case may be, unlucky) all the while. There is indeed a system and it may be off a bit, like weather forecasting, but by and large it's quite predictable.

Let's dump the “hard, hard, hard work” mantra for a while and find out how to make luck stick.

Is there a way to systemise hard work and luck?

Imagine a problem that's been unsolved for 64 years—and isn't expected to be solved for quite a few years to come.

The problem is a bit mathematical, so bear with me

Mathematicians have had a bit of a bugbear for a while. They're not sure if it's possible that the equation 33 = x³+ y³+ z³ has a solution. They've known for a while that 29 could be written as 3³ + 1³ + 1³, for instance, but 33—that number seemed to be slightly insolvable. What was even more maddening was, that unlike in the past, mathematicians have access to computers that can do wild and wonderful things.

And then, Andrew Booker, also a mathematician, solved the puzzle.

The problem that had confounded mathematicians since 1955, which is when they first started using computers, had been worked out by Booker. And Booker himself was a bit astounded. He had access to a supercomputer, but he hadn't expected to see any solution for at least six months—if he got a solution, that is. Yet, in three weeks, he had his answer.

At this point, it's natural to make an assumption

He did have access to a supercomputer after all. But so did many others at this point. What made things utterly different was that Booker wrote a specific algorithm. “He has not just run this thing on a bigger computer compared to the computers ten years ago — he has found a genuinely more efficient way of locating the solutions,” said Tim Browning, a number theorist at the Institute of Science and Technology Austria.

And Booker went on to explain

“Previous algorithms “didn't know what they were looking for,” Booker explained; they could efficiently search a given range of integers for solutions, but they weren't able to target a specific one. The algorithm itself was so precise that it was about 20 times faster than any other algorithms that take a random approach.

Was it skill or luck that got Booker to his goal?

In retrospect it's a bit of both, isn't it? Sixty-four years is a long time, and yet not one person had sorted out the problem. It was mostly his own skill that got him there. But even Booker wasn't sure he'd get to the end point.

Moreover, he wildly underestimated how much time was needed. To attribute his work to luck alone would be silly. To say that his algorithm itself was the reason for the success would be pointless without the equipment.

If you're a surfer, you go out with your surfboard. There are plenty of waves, but you're waiting for the right wave. If you're skilled, you're going to have the ride of your life. But waves are about luck. You could be twenty feet away, and you'd miss the wave. Or too many surfers could be crowding that one spot, which means you'd have to let the wave go.

But one thing is for sure. If you're on the beach, you're not surfing. In short, skill matters right at a precise moment. If you're around, you get to ride that wave, and if not, should you give up?

Not at all, because when you're skilled, an opportunity is almost like an endless flow of waves. If anything, your ability is in saying no to many possibilities, so that you can pick one that seems to make sense.

No one knows the answer. And we know there's no way to systemise the combination of skill and luck. What we do know is that just like a skilled surfer, you'll have a much better chance of coping with luck than anyone else. Which, in turn, brings us to the whole point of this article. That the advice that our parents gave us wasn't entirely wrong.

They did use the term “hard work” which is off the mark. But skill is a good replacement, and it's our job to improve our skills. Then instead of slaving like a crazy person for the rest of our lives, we need to put our faith in luck because luck forms the other part of the equation.

Which is why the next time someone pats you on the back for how hard you've worked, you can smile and say thank you. And then remember the role that luck has to play.

When is the most likely time for me to get a cold?

That answer seems improbable, doesn't it? While Google, based on searches, can almost accurately tell when a virus epidemic is unfolding, there appears to be no way for an individual to know when they will personally fall ill.

However, with almost everything, there could be a recurring pattern. In my case, the majority of my illnesses occur right before I'm about to go on vacation or to do a workshop overseas. Was there somehow a pattern that I'd failed to see? And what was that pattern? Let's take an example, shall we?

When I was in university, I'd take part in cartoon competitions

I wasn't exactly in “hard work mode”. I'd been drawing cartoons for years, learning from the cartoon strips in newspapers and books. As a result of this acquired skill, I was drawing for local as well as national newspapers.

Even so, I wasn't able to win a cartoon competition at the university level. It wasn't that I'd fail miserably. I'd be placed in second or third place, but never got to first. Obviously, the skill alone wasn't enough. And luck wasn't reliable.

I had to look for a pattern

With the cold, I already had a pattern. I'm about to get on a flight, and I fall ill. Or I get to the destination, and I'm sick. This kind of pattern has replayed itself reasonably consistently for years on end. It can't be psychological, because viruses don't care about what's going on in your head. But there was the issue of tiredness.

Usually just before we get on a plane, I tend to do a lot more work than usual. Plus, there's the chance of a course just coming to an end. In short, it tends to be a perfect storm of activity. At which point, the tiredness factor could tip over.

It doesn't always, but it could. And now we have a predictor, a precursor to the event. It's not based on skill or even luck. It's based on a recurrence.

With the cartoon contest, there was also a pattern of recurring activity

When given an hour to complete the cartoons, I'd draw several gags. In cartoon terms, that's three or four jokes on the same large sheet of paper. I found, however, that this involved coming up with three-four situations, planning them, sketching and finally rendering them.

This meant a maximum of 15 minutes for each of them and as a result, there might be just one funny gag and the other three would be average. What if I were to spend most of my time on only one joke?

That would give me plenty of time to think up the idea, sketch it and then render a fair amount of detail. Was that strategy a sure predictor of success? No, it wasn't. But it gave luck that extra boost.

If a cold and a cartooning contest aren't precisely proof, we can look around us every day

When we check the weather, we're applying approximately the same parameters. Winds, pressure and moisture are susceptible to change, and that's a bit of luck. But there's also the skill of the weather forecaster.

What helps create an almost perfect weather report virtually every single day is understanding the pattern. In the past, only one forecast was considered. Not any more. Forecasters now rely on a system called Ensemble forecasting.

Instead of relying on a single prediction of the most likely weather, a set (or ensemble) of forecasts is produced. This set of projections aims to indicate the range of possible future states of the atmosphere. The multiple simulations are conducted to account for the two usual sources of uncertainty in forecast models.

And that success is bound by the factors of skill, lots of luck, but also a fair bit of pattern recognition

Patterns remain the factor that gets us further down the line every single time. For me, this means that I need to watch the last four weeks running up to our trips. Considering I'm up at 4 am every day, a few afternoon naps in the weeks close to the flight might be not just a good idea, but crucial for the body to recover.

For you, some other change in behaviour may be needed, but if you look long enough, you'll find a pattern. Then it's time to take action and make sure you use that pattern to your advantage.

Patterns, skill and lots of luck. Mix all these three, and we have what's needed for us to go forward.