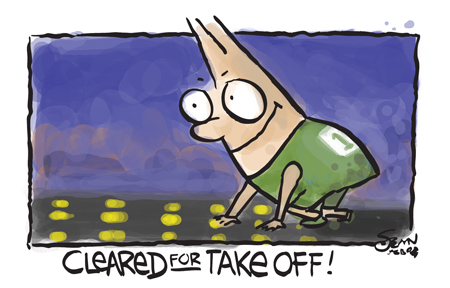 Take time off? Doesn't everyone want that?

So how are you supposed to achieve that force of business? How do you get to downtime? And what about the passion projects you've been putting off for so long?

In this episode we wrestle with the remaining two forces of business and start on a journey that's been put aside for much too long.

In 2010, I got this dazzling idea to do a series of stock cartoons.

As you probably know, I'm a professional cartoonist, and my fascination for Photoshop has lasted for well over 20 years. It seemed like a very good idea to create a unique set of cartoons that clients could use for their blogs, e-books, webinars or presentations.

Then a few years sneaked up. The cartoons aren't done.

Passion projects are what feed your soul

A passion project is something that you really want to complete, not necessarily because of revenue or fame. It's just something that you have to do because no one else will do it. The longer you put it off, the more you feel something chipping away at your soul.

So much of what's important to me, to you just seems to circle the airport and never really lands.

However, at least at first, passion projects don't necessarily feed your tummy

If you were to decide to spend time embarking on a photography project on the side, or writing the novel you've always planned to write, there's almost no guarantee that any of it will bring in revenue or clients.

It's possible that you may hit paydirt or hit a wall—at least when it comes to any sort of riches or fame. Even so, now and then it's important to feed your soul.

Back in 2011, Stout decided to trash 4 out of 5 of his best-selling teas. As if that were not enough, his company had to re-create 75 of his tea blends. What was the reason for all of this upheaval? It was a passion project that Stout had wanted to put into place for a long time.

Around 2011, he changed the way he was personally eating and found he wasn't keen on drinking a lot of his own tea. “Most people don't realise it,” he says, “but a lot of tea has chemicals, even if they say it's natural.” Since he was keen on getting rid of all chemicals and every last toxin, he decided to scrap his best-selling tea.

Stout did his homework. He didn't merely jump into changing the teas without seeing if a market existed. Even so, it was an incredibly difficult decision to make as some of the teas had been superstars all the way back from 1995.

Some of his clients ask for those teas even today, and he won't stock them or sell them because they don't meet his standards.

No matter how we look at it, it's a plane that's been circling the airport, and you need to get that plane to land. At Psychotactics, this meant walking away from doing courses in the second half of 2017 and early 2018.

The Article Writing Course and other live courses (that means courses that are conducted by me online) won't show up until mid-2018. In doing so, we walk away from well over $100k-$150k of profit.

Whether you're dealing with smaller revenues or substantial revenues, the fear and the excitement are remarkably similar

However, a passion project needs to be done. It can't be postponed forever. All those dreams of what you and I will do when we retire, can't wait for retirement.

They might be pushed onto the back burner for a while, but at some point, we all have to do what is important to us, even if we aren't sure it will have a payback.

When we left India, we didn't know what to expect in New Zealand. We'd never been to Auckland and knew next to no one. We were also leaving a very settled and decently luxurious life back in Mumbai.

The people we'd met along the way told us that it rains a lot in Auckland and it's really quiet. That to us was our beacon of light. We love the rain and the quiet, and it became our not-so-little passion project.

Making space for “landing those planes” is necessary.

It may not happen right away, but it needs to happen because it's good for the soul. What we've found as well, is that in the long run it's been reasonably profitable. Every time we've walked away from one thing to put our energy into another, we've found it's helped not just our mind, but our business as well.

There's still one thing that we all desperately need, and it's called downtime. It's such a simple concept that it almost requires no explanation, but let's give it a shot, shall we? Let's examine the fifth force of business and why it's incredibly crucial to your business and sanity.

In the early days of the watercolour course, I gave everyone a break for a month.

When they came back, almost every participant was painting a lot better than the month before. Did they practice during the break? Did they access other material?

Some did, but it didn't explain how almost everyone was better—even the ones who hadn't picked up a brush at all. The only common element between every one of the participants was a factor of downtime.

Without downtime there's a lot of do, do, do and not enough time for the brain to process what's happening. Time away from work is almost as crucial as work time itself. Which is why we plan the year differently from most people I know.

Instead of listing out all the things we need to do and projects we need to complete, we first put in the blocks of downtime. Then we put in the work in between that downtime. It enables us to recharge in a way that's not possible when at work.

Yet most of us don't have the luxury of downtime

When we started mentoring my niece, Marsha, for instance, it was a bit like starting up a new business. There was no time to waste. To get her up to speed, I'd tutor her on the way from the classroom to the car. Then in the car, we'd talk a bit and do spellings and practice multiplication tables.

We worked through the week, and for a couple of hours on the weekend. The school holidays were intensive for her, but also for us, and we often put in 6-8 hour days for five-six weeks on end. When you're right at the starting point, everything is an uphill journey.

However, over time, Marsha has zoomed to the top tier of the class. Now she still works as hard as she possibly can, but she also has big chunky breaks during the day, week and in the year.

In business, it's not unusual to have no downtime

The mortgage and bills are starting to grow in untidy piles on your desk, and those payments need to be made. But in time, almost all of us have the ability to take time off.

It almost seems like a silly thing to do, to take time off when the business has just started to pick up. And yet, it's what we all need to do. Downtime calms you down, relaxes you, and it helps you come back refreshed.

It's a force of business like the other forces

If anything, like the students on the watercolour course, it helps you come back stronger than ever before. Plan your downtime. Start small. Take a few days off, before embarking on longer breaks. But ignore the breaks at your peril. A tired brain is not quite as good as a rested one. And certainly not as creative.

Which brings us to the end of this journey where we explored five forces that pull us in different directions. It's a tug of war. Get used to it. With a little work and strategy, you'll be on the winning side.