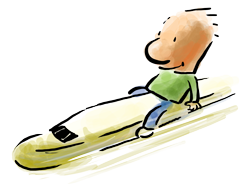 Let's talk about boiling an egg, shall we? What would you do first? Just turn on the flame and then scramble to get the vessel, water and egg? Wouldn't the flame be the very last thing you turn on when doing something as simple as boiling an egg? Yet, there we go into writer-land, sitting at our computer, and expecting the ingredients to show up from thin air!

And that's where the system goes out of the window.
So what would a real system look like?

A real system would involve at least three steps.

Let's start with Step 1 and generate ONE topic

When you sit down, you first need to have a topic. Most people confuse a topic with a headline. And a topic isn't a headline at all. It's a topic. e.g. Japan is a topic. It's the broad, big picture kind of thingy that you can't do anything with at all. The purpose of the topic is simply to give you direction—so you can head over to Step 2—the sub-topic, which is where at least part of the action begins.

So why does the sub-topic have so much relevance?

That's easy to understand, isn't it? The topic like “Japan” is too hard to handle. So you chop it down to some thing more manageable—like “the bullet train”. Now you have a much better point of focus. Your mind is off the geishas, tonkatsu and green tea ice-cream. Instead you're focused on just the sub-topic of the “bullet train”.

And sometimes, that's as far as you need to go—from topic to sub-topic.
Obviously this isn't one of those happy days, so we delve deeper into Step 3 and sub-sub-topics.

The sub-sub-topic usually nails the deal

Your brain is focused on the “bullet train” and now you can write a pretty detailed account of the bullet train. Maybe you could take us on a journey that includes the history, the technology and the challenges encountered.

And as you're writing, something weird happens

You suddenly find that the article is getting very bloated. You started to write about two-three paragraphs about the “challenges encountered”, but suddenly you seem to have dozens of points on “challenges”.

Well, don't panic. We're still on track (pardon the pun). You continue to put what you can in a couple of paragraphs and silently rejoice. You've now created not one, but two articles on the “bullet train”.

Aha, but no article has been written, right?

Not yet. You've spent all this time buzzing steadily ahead from topic to sub-topic. And then delving down to sub-sub-topics. And now you know exactly what you're going to write about. You've let your thoughts simmer and not a word of the article has been written. Yet, putting together these elements is akin to get the egg, the water and vessel together. At this point, a simple outline will get the cooking process underway—and you can write.

So yes, systematic planning helps keep writer's block away. But what about the other two issues? How do under work and over work play their part?

Underwork is when you decide to do nothing

Any skill requires you to get to a level of fluency. And to get to fluency, you have to write every day—at least for a while. But often we write a bit, then take a break. That day long break stretches to a week, maybe two weeks, and then hell freezes over. It takes an enormous amount of persistence to get moving. Yup, writer's block has smacked you right in the face!

But overwork will do about the same

Most of us have forgotten how to take time off. So we keep working endlessly. And all this crazy work, work, work soon depletes our energy. Energy is a strange thing because you can have time but no energy. With no energy we slip right into resistance, procrastination and yup, hell freezes over a second time.

Luckily there is a way out of the trap

No matter how much of a soup you're in, all you really have to do is go through the three-step process. Start simple. Just a topic. Add your sub-topic. Then, the sub-sub-topic. Now your brain is churning steadily ahead.

Writer's Block has been defeated.

For today, at least.