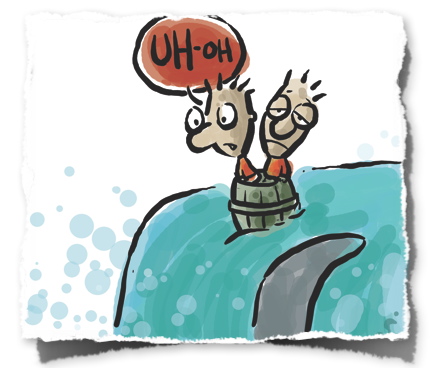 Have you heard of Gottman?
Gottman, as in John Gottman.
What if I told you he was the is the co-founder and co-director of the Gottman Institute? Nope, doesn't ring a bell? Well that's interesting, because Gottman's research is all about ringing bells. Or intuition, as we call it.

And Gottman is a good example of um, intuition
Most of us are foxed by intuition. How is it possible that one person is able to know something that we just can't see? How is it that someone is able to feel, or smell, or hear, or sense something weird in the mix, when it's appearing all rosy to us? Amazing as it may seem, it's the data that's the problem.

You see Gottman was able to see through the data and predict “divorce rates”
So if you got a bunch of couples in a room, and Gottman video tapes couples interacting with each other. And couples go through a lot of stuff when they're interacting.

They smile. They touch. They laugh. They argue. They nit pick. That's a heck of a lot of data to process. What's interesting is that Gottman could do what hundreds of marriage therapists, counsellors, pastoral advisers and students couldn't do—even if they watched the tapes for hours on end.

Not one of them could predict as accurately as Gottman could.

Gottman could predict which couples were headed for divorce
And he could do so with blinding accuracy. The group of therapists, counsellors etc, could only predict the divorce possibility 53.8% of the time. Gottman says he can sit at a restaurant and eavesdrop on a conversation, and accurately predict which marriage was headed to “rocksville”.

So is Gottman intuitive?
Not really. What he's able to do is “thin slice”. Data itself is a whole load of crappy stuff. What's important is knowing the one factor to look for every single time. That one factor reveals itself in a matter of minutes, even seconds. And then it's easy. What seems like magic or intuition to you is merely an understanding of what to look for.

It's a bit like driving your car
If you looked down at your car dashboard and said “Shucks, I need to fill fuel quickly” and then the car stopped a few miles later, you wouldn't be considered a savant or really intuitive, would you? You'd be considered stupid. You saw the fuel gauge. It read “empty” and heck, there was even this bright warning light.

I can also tell if a student will become a great article writer.
I don't care what language they speak, or their background, or their culture or even if they can write (yes, illiterate is just fine). I can tell you if they will become great communicators within a week or two of them joining the article-writing course.

So am I intuitive?
No I'm not. I'm thin-slicing. I can look at one factor, and tell in a second that things are going wrong. Or going right. Just like you can with the fuel gauge. Just like Gottman can tell with his potential divorcees.

So how do you develop this intuition?
You first stop considering intuition to be magical. It's not magical. It's simply an isolation of facts. Some people are able to do it with article outlines. Some are able to do it by smelling the air. Others are able to tell if things will go wrong by reading a rose (yes, they're reading your energy from across the world). It may sound all fa-la-la to you, and you may think it's all cuckoo stuff, but it's not. It's sheer isolation of facts.

And like a fuel gauge, if you're shown what to look for, you see it everywhere.
Like for instance in The Brain Audit we show why customers buy and why they don't. And while there are seven reasons outlined in the book, the whole book is useless without you isolating (and understanding) the concept of “Target Profile”. Get that wrong and the entire book can take you down the wrong path. Get it right, and you're suddenly intuitive.

To develop intuition you must seek great teachers
A teacher isn't someone who gives you a ‘cheat list' and tells you to just do it. A teacher is someone who knows about thin slicing. Who knows what can make you fail. Or succeed. When you learn from great teachers, you too learn to identify, isolate and then apply the very same skills.

You become like Gottman.
Gottman, the cofounder and co-director of the Gottman Institute.
Gottman: The guy who can predict divorces over dinner tables.

Footnote: If you want to read more about the concept of thin-slicing, get your hands on “Blink” by Malcolm Gladwell. Yes, I know it's not a new book, but at least you'll understand the concept a whole lot better. I got to know about Gottman through Gladwell. And yes, if you want know more about “Target Profiles”, read The Brain Audit. Not a new book either.

———————–
Next Step: “Before I purchased the Brain Audit, I thought this is just crazy, I've got so much marketing material that I still haven't implemented.“

But right from Sean's first story and metaphor, I could see this was different. I was hooked. The Brain Audit challenged virtually every principle of marketing I'd grown up with. Like selling benefit or never starting with a negative or problem.

And it's this refreshing, innovative approach that makes the Brain Audit a must buy for anyone who is really serious about challenging the status quo and taking their business to new heights.

Already we've applied the principles to one of our workshops and the response has been fantastic. The Brain Audit and our ongoing association with Sean has been one of the best business decisions we've every made.

Paul Mitchell, Managing Director, The Human Enterprise, Australia
Judge for yourself The Brain Audit: Why Customers Buy And Why They Don't

I found it was far better than I ever imagined, over the years I have been a participant of many different memberships and forums and none of them come close to what 5000bc offers.

I would recommend 5000bc to any entrepreneur or small business owner as a great source of knowledge and information from like minded people who have often already achieved what you may be struggling to do and can help save you loads of time and ultimately expense in getting to where you need to be.

1) “Lazy Testimonials” Attract The Wrong Clients. Learn how to use the power of the ‘six critical questions' to get incredible testimonials–and attract clients that make every day an absolute joy.

2) Do you sometimes wonder if planning books are written just for the ‘organised' people?
Learn Why Most Planning Fails: And The Critical Importance of Chaos in Planning

3) Does your websites, brochures, presentations, etc..confuse your clients? .
Put some sanity into your design with some really simple tweaks.

3) Yes, you needs visuals on your sales page, but how do you use visuals to immediately improve your sales conversion?
———————