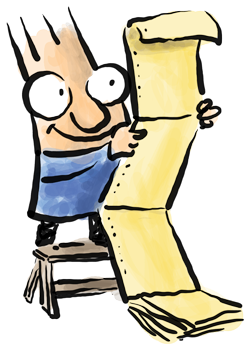 Have you heard about a program called InDesign?

Well, if you haven't, it's a program I use to create amazing-looking e-books. Then one day, someone asked me to show them how to create e-books similar to what I was doing. Could I, she asked, create a video-based product that would teach her the precise steps to learning how to create the e-book, the e-book, and nothing but the e-book?

So that's what I did. I mapped out the steps required to get an e-book up and running.

But what does this product have to do with article writing?

Think about it: What is a product? Yup, that's correct. It's a bunch of articles. When you string those articles together and cover the points needed, voilà, it's a product. And if we are to write articles, we need to write outlines. And to write outlines, we first need to create topics and sub-topics. How hard could that be?

Not hard if you do less work, instead of more

Yes, yes, don't read the previous line again. It's important to do LESS than more, because the moment you do more, you get yourself tangled. And the best way to see the tangling is to watch it in slow motion, with an example. So let's roll those slow motion cameras, shall we?

And let's get back to that InDesign product I was creating.

– How do we create shortcuts?

– Why is systemising folders important?

– Do we really need the library?

– Can we do without master pages?

And it's unlikely that you've done the questions. But you may have still added some extra words here and there. Let's look at what's possible.

– How to create shortcuts

– The importance of folder systemisation

– Why libraries are crucial

– Getting master pages to work

And of course all of these are not needed. So now that we know what's not needed, how do we do less and get more?

So why is less more important?

The trouble arises when we expand the sub-topic. Usually a sub-topic will expand like this:

– What are shortcuts in InDesign?

– Why are they important?

– When do you use shortcuts?

– Where can you change shortcuts?

– What are the three most important shortcuts to know?

– But what if I want my own shortcuts?

Now instead of just the term “shortcuts”, let's take the questions instead

Sub-topic = How do we create shortcuts?

You get stuck, don't you? Instead of that question “how do we create shortcuts”, you could have restricted it to just “creation”. That would make the sub-topic go one level lower. Because now you're not just talking about shortcuts, but how to “create” shortcuts. And in doing so, you realise that there's a whole world of stuff to do with just “shortcuts”.

But we don't want to dive so deep yet

And we don't want to confuse ourselves.

So we avoid questions, long sentences and repeating ourselves. And that enables us to create sharp, precise outlines. 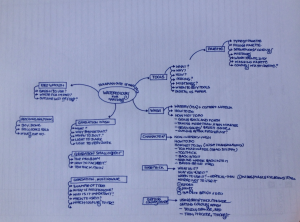 Notice how for the most part, the sub-topics have been restricted a single word? That's because you don't need any more. In some cases, the term “gradation” has been written over and over again. Again, that's overkill. It's not terrible, but you don't need it.

Note also that this is the first draft of the outline. So it's mostly to get the topics and sub-topics. The complete outlining will follow later. But some ideas popped into my head and I didn't want to lose them, so I did jot them down.

And yes, that is my handwriting.

But what if I put in two or three words, instead of just one?

Sometimes you will find that sub-topic requires more than one word. Well that's fine. Keep it whole. In one of my outlines I have terms like “gradation wash” or “recognizing junk”.

So when creating outlines be sure to take these steps

2) Create short, non-exuberant sub-topics. The fewer words you use, the better.

3) Then outline and you'll find that it's much easier to outline your article.

I started out with the InDesign product and a coffee later, I was done

I didn't need to think through the detail. I just needed to have the topic and the sub-topics as short as possible. That took under 10 minutes and I was done.

The outlining would come later and wouldn't hassle me at all.