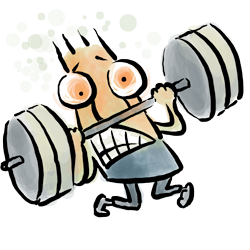 Notice how you brush your teeth with toothpaste every morning?

Doesn't that seem like the most natural thing in the world to do? Well, not really.

Until about the 1900's, few, if any people brushed their teeth with anything that anything that even closely resembled toothpaste. In fact, statistics in the United States showed that fewer than 7% of the population had anything to do with toothpaste. And as you’d expect, tooth decay was a major problem.

And along came a marketing guy called Claude Hopkins

And Hopkins created what was later called a ‘craving loop’. He created a system that would drive customers to not just buy, but use toothpaste every single day. And he created ads (the forerunner of newsletters) to get people to change their behaviour.

“Just run your tongue across your teeth”, said the advertising of the time, “and you’ll feel a film. That’s what makes your teeth look off-colour and invites decay.” The interesting part about this ad, is that it was an easy trigger. People, when asked to run their tongue over their teeth, did just that.

Without a regular newsletter, no one is going to show up to your site. Well, they will show up, but not as frequently as you like. And then the concept of consumption kicks in. They don’t show up, so they don’t consume. And soon enough, their membership fails to renew. So sending out that newsletter is pretty darned critical.

But it’s not enough to send the newsletter

In 5000bc, there are about four-five new articles every week. There can be as many as 100-150 new posts and detailed responses to those posts, per day (yes, per day). Even in a reasonably new (and quiet) membership, you can have a ton of new content. And once your membership forum gets up and running, you have a ton of content buried in the forums as well. So what do you do?

You’ll tend to do what most people do

You tend to send out all the things that are available that week. And soon this becomes both addictive and demoralising. Addictive, because it’s kinda like a buffet: You see a ton of great content, and you want to go and read it all. But demoralising too, because you suddenly feel overwhelmed. You feel there’s so much to read/listen to and you simply can’t cope.

The way around this is to go to the second concept of consumption, namely isolation

Yeah, yeah, you’ve got a ton of content, but don’t push the entire load at your members. Instead, you pick the juiciest, yummiest stuff that’s been posted and drive them to that ONE thing. And you’ll notice a flurry of activity. Suddenly dozens of members are all hovering around just one article, or one series of articles. If you were to look at your statistics, you’ll find that they ignore everything else—well, almost everything else—and head to what you directed them to in the first place.

If this content is on some sort of platform where they can engage, they will engage. So if you post it on a forum or a blog-kind-of-software, and the members can ask questions, discuss stuff etc., they will. And now you’re creating engagement. But instead of trying to do all things to all people, you’re focusing on one trigger.

But this trigger is slightly different for courses

If you’re doing a course,  you’re running a membership site as well. And the problem we had with our early courses, was that people would drop out. It’s not like they meant to drop out. It’s just that they got busy, yada, yada, yada. But the point is that the drop out rate was often as high as 50%—or more.

Now this doesn’t make sense, does it?

Why would you pay $500 or $2000 for a course and then drop out? Yeah, if it’s some $25 course, it’s no skin off your back, but a more expensive course hurts a lot more, doesn’t it? Well it may hurt, but people still dropped out.

Then we stumbled on the concept of daily practice

Not weekly, not bi-weekly. Not even every two days. Every day.

Every darned day (except the weekends, that is).

You know this from your own experience

Let’s say you have a language class every Tuesday night. And it’s held every week. And you get some assignments to do. When do you do those assignments? Yup, on Monday. Or even worse, on Tuesday itself. And sometimes it all gets too much and you don’t get it done at all.

And learning goes down, comprehension goes down. And dropouts in both member levels as well as learning occurs. But with daily practice, the participant is able to learn tiny increments daily. And this enables them to get confidence daily and move ahead—yup, daily. And of course their assignment, that they do the previous night, that too is done, daily.

And this is because the assignments are created to be daily progressions. Just like you wouldn’t brush just once a week, you wouldn’t show up once a week on the course as well. So instead of you, the trainer, having to send out reminders to get people back all the time, all you’re doing is creating a habit.

And once the habit is set, it becomes slightly addictive

But unlike the rambling nature of Facebook, the courses provide a real rush of dopamine

When we do something well, and start to master little bits, we get this amazing feeling of achievement. And every visit to the forum, learning a little bit more, turns the person into an even greater expert. Plus there’s the social aspect of the group. They help you, so you help them, and everyone learns from each other. The intimidation level is wayyyyyy down and the confidence level is much higher.

But can this course technique be replicated in a membership site as well?

Can you draw people in on a daily basis? Incredibly the answer is yes. Yes, you can. But you have to create a system that enables them to have to check in every single day. And we looked at some of those forums e.g. The Taking Action Forum. Setting up a forum such as this, and setting guidelines in place, enables people to keep coming back repeatedly.

Of course, the course is among the most fool-proof systems to get participants back over and over again, and that’s just because it’s time bound. A course will last three months, or six months or maybe a year. But it doesn’t have this sense of infinity in place. A membership site doesn’t always have this kind of time-zone, and it’s hence it’s a lot harder to get members to show up on a daily basis.

With the right systems and a great deal of persistence, you can chip away and get your members to frequent as often as those doing courses. And yes, even for us it’s an ongoing experiment/battle. But we know one thing for sure.

For your membership site, you want to get your members to drop in to at least one big event/topic every week. And if you’re doing a course, believe me, you want them to show up every single day. That’s the way you get the consumption factor going great bazookas! And that’s why people keep coming back time after time.

Maybe, even twice a day!