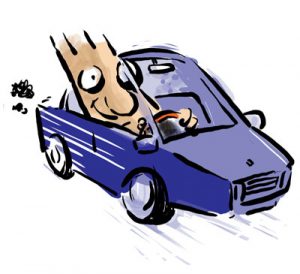 Does your marketing campaign tend to go suddenly quiet? The phone should be ringing off the hook, your web server should be crashing with the number of orders, yet all you hear is the sound of silence.

One psychological factor could throw your entire marketing campaign out of whack. What is that factor? And how can it make your campaign come alive again? Read this article to solve the puzzle.

Let's go back to the 70's. Imagine we're in a department store. You, me and a whole lot of other people. No one seems to be in any sort of hurry.

Then suddenly there's an announcement.

“Attention, K-Mart shoppers. We have a Blue Light Special in the Men's department: Levi's jeans for only $19.95. Hurry, this sale ends when the blue light stops spinning.”

You hear it before you see it. It's a low rumble. Then seconds later like an army of wildebeest on the move, a multitude of shoppers seem to roar ahead. And God help you if you're in their way!

Mild mannered grandmas turn into menacing Indy 500 racecar drivers. Housewives push, shove and jostle to avail of the bargain as soon as they can. Teenagers bent on stretching their allowances join the fray.

Shopping carts tumble, angry words fly. And while the blue light flashes, it sounds like a zoo with a hundred angry wildebeest.

Which psychological factor creates such a level of pandemonium?

Could it possibly be the bargain factor?

Suddenly there's a kind of hush.

Notice how the buying euphoria has died down. The shoppers go back to their fitting rooms. They window shop, perhaps buy a few things. Perhaps not.

You still think it's the bargain price, don't you?

So go figure this one out.

It's Friday, December 22, 2000. Parents across the United States were going bananas in their attempt to get the mother of all Christmas gifts: The Playstation 2. For some parents, the Bambi look of their five year old, coupled with the emotional guilt is just too much to handle.

Look what happened next.

– In Georgia, parents rented Playstations at video stores and never returned them.
– In Berryville, Ark., teenagers mugged a father and his son as they walked out of a Wal-Mart, and stole their PlayStation 2.
– Some parents paid up to $2,500 for the $299 Playstation on Internet auction sites.
– And The Wall Street Journal reported that a 20-year-old Canadian man, who was later arrested by local police, took $400,000 from desperate customers wanting to get their PlayStations before Christmas.

As you can see, there were no bargains to be had. In fact, it was quite the opposite. People would have gladly paid a premium to get what they wanted. So the psychological factor certainly didn't hinge on price.

But the words *blue light* and *Christmas* should give you a clue.

Yes indeedy, you've guessed it. It's a sense of urgency. That flashing blue light signalled the start of the madness. When it was switched off, everything went back to normal. So also with Christmas. Fancy telling your child that Santa isn't going to deliver till March. Ooh, there would be tantrums!

It's urgency that drives people bonkers.

People? Did I say people? Well your customers are people aren't they? So if it works for K-Mart (God bless their soul) and Sony (and theirs too!) why wouldn't it work for you? And why aren't you implementing it in your business?

Because you don't have products, right?

Yeah any old dodo can put a sense of urgency on their products. Drop the price, do some promotion, hold back the goods and you create scarcity out of nothing at all. But how do you do this with services? Admittedly this is much harder.

If you're dealing with small business…phew!

By default most small businesses are expected to be jugglers. Their 48 hour days and eight arms are still not quite adequate to handle the twenty squillion issues that pop onto their work desk each day. They are always on the lookout for a supplier that can offer them a little additional incentive.

So go ahead, offer them the goodies.

Turn on the pressure by offering a whole series of services that would no longer be available after a certain date. Throw in the email support, drop in the add-on training and lay before them a smorgasbord of yummy stuff for their business.

Hey, they need your service anyway. They don't really want to think about it, they just want to put it off till the last possible second.

If you fail to put an urgency factor on the product or service you're offering to a small business, something else will take precedence and your offer will be buried under the paperwork, possibly never to see the light again.

Workshops and training use this urgency tactic extremely well. By restricting the seats and dates, they pummel our little brains with the need to improve and grow our businesses.

Research has shown that the maximum numbers of signups are in the second last or last week of a workshop. The scarcity factor kicks in and the seats get filled.

How to deal with the dinosaurs called Big Business…

Big business looks at you in scorn. Humph! Don't even try that trick with us, they snort haughtily. And it's true. Putting pressure on them is like trying to scare a dinosaur. One swing of the tail and you're history.

However you've got to remember a big business is only a small business with lots of people.

People with their own agendas, their own little private victories to be won. Aha! There's le loophole. Focus your efforts on an individual's issues, instead of trying to take on the entire company's problems.

The key is to tie your service offering to some external compelling event. Something that is compelling to the buyer.

Their fiscal year- ‘Do it now so you can charge it to this year's budget' or results before the next board meeting-‘Be a hero at the meeting!' or demonstrate a solution before the annual stockholder's meeting -‘Solve this problem so that the CEO can calm the shareholders'.

Big business is like a small business with deeper pockets. If you recognise this fact, you can create a sense of urgency.

Now don't forget to look before you cross the road…

And don't ever back up on your offer. Once it reaches its expiry date, pull the plug on the day you've promised.

Your public is watching you all the time. If you get just that bit greedy, they'll remember that you're pliable. One flinch and you're dead in the water!

Where's the urgency in your communication?

Urgency is a very powerful psychological factor. It transmogrifies the most unmotivated customer into fiercely determined buyers. Put the urgency factor into your communication and watch your customers go bananas, as they scramble to buy your products and services.

And eliminate that sound of silence for good!

Recommended Product: Is the Customer Ready To Buy?: Customers give you a clear indication when they're ready to buy. But we read the signals all-wrong. We make a simple mistake and it drives the customer away. You'll be amazed that you've never realised this obvious buying signal before.