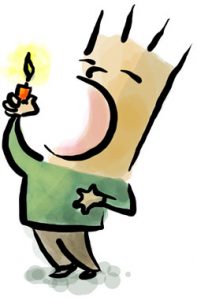 My niece Keira was just two when I started teaching her the little Spanish I knew. And one of the words I taught her was ‘zapatos' (pron: sah-pah-tohs).

Of course, Keira has a mind of her own.

I kept saying ‘zapatos', and Keira kept insisting they were ‘shoes'. After a while I gave up, but reminded her from time to time about ‘zapatos'. And then I clean forgot about the incident, until Keira's mother told me this story.

Apparently they were on the way to our house for lunch

There was Keira sitting in her high chair eating her food (it's what parents of toddlers do before they go for lunch) and making a slight fuss. At which point, her mother told her “Hurry up, we have to go to Sean's house soon!”

And Keira turned to her mother and said urgently, “zapatos, zapatos”.

We automatically assume the songbirds sing in tune. But according to Shinichi Suzuki, creator of the famed Suzuki Method, that's not the case at all.

They are taken from their nests as fledglings. And the moment they lose their fear and accept food, a “master bird” is put on the job to sing. As it turns out, the “master bird” has been trained to sing well and does its job masterfully. And the student-nightingales join in the song, learning to sing beautifully.

Incredible as this may sound, the tune is not instinctive

This is because wild birds don't always sing in tune. Some do and some don't. It depends on the teacher and the environment. But with the captive birds, aha–they all sing in tune.

Interestingly, you can learn to sing out of tune

Suzuki talks about how he often runs into people who sing out of tune. What's more interesting, is the mother sings out of tune as well. Can you see the link? No, it's not hereditary at all.

Now the brain has etched that tune in the memory, right? But since the brain is plastic, all it needs is to then hear and sing the same tune 6000 times. Now the brain rewires itself, and voilà, singing in tune is not a problem any more. And all it took was repetition.

But sheer repetition may not be enough….

On the Article Writing Course, I had a student who was having a problem getting to the ‘one word'. And the more he tried, the more frustrated he got, until he was ready to throw in the towel.

It's how we learn to walk, talk, sing, and dance

With the right teacher we move forward rapidly. With the wrong teacher, we go off tune. That's when we either detest the topic, the teacher, or believe we're not talented. And as Suzuki would say: It's not a matter of being born a good or bad singer.

If the bird has a good teacher, it will learn well. It it has a bad teacher, failure is almost inevitable.

And to me, this was the most exciting revelation of all

As a teacher, at times a student drives you crazy. And you start to believe that they're not good enough after all. And that's when you realise that you must persist. Or at least find a different way to teach.

Because the repetition, combined with the teaching will get the student to sing just like a nightingale. But it does take a ton of patience and diligence.

He or she may have a mind of their own—which is great. But it may cause you to think that they're not learning.

But they are. If only you stay focused, they'll get on track.

And that, is the greatest blessing for both the teacher and the student.