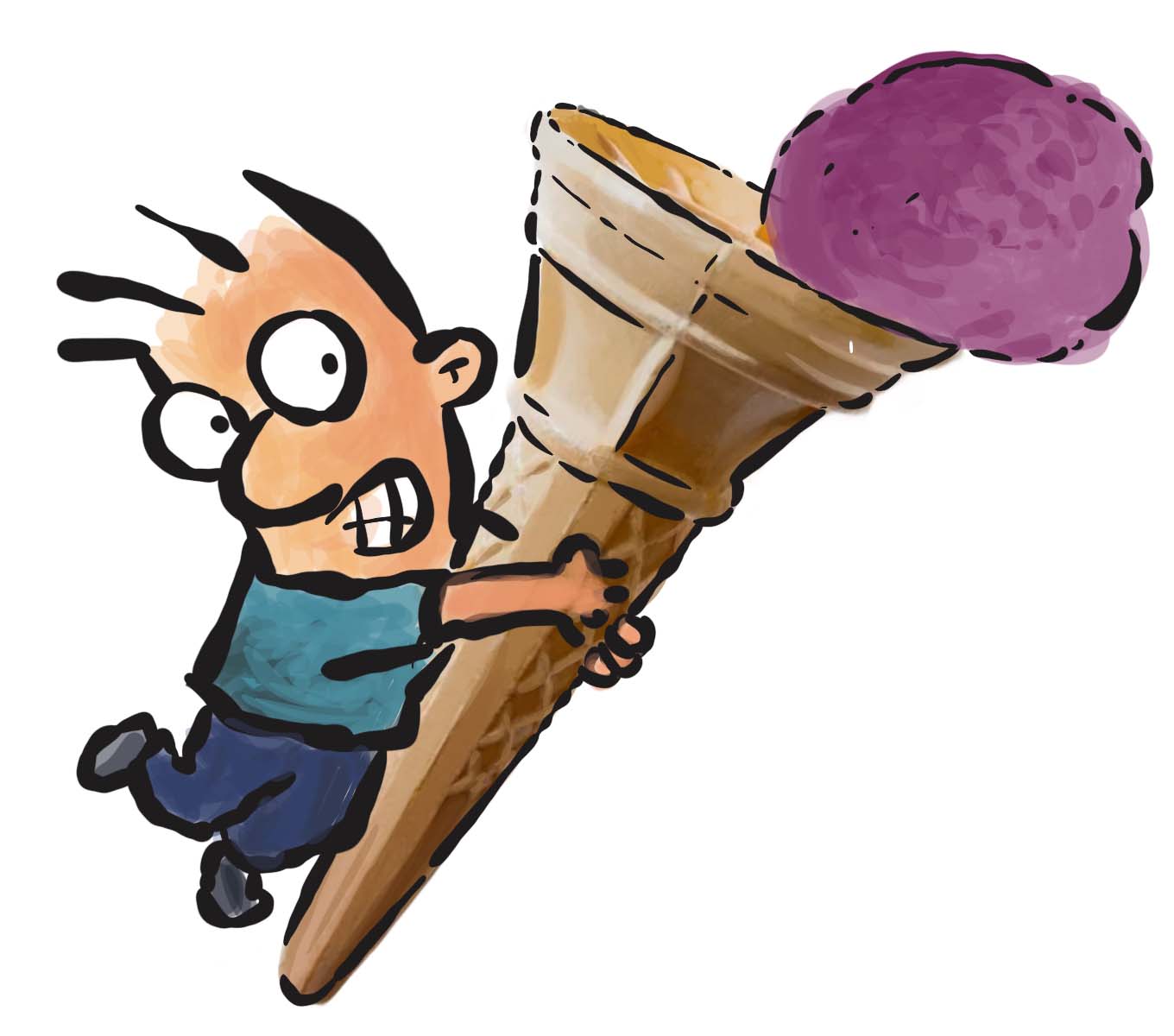 Is giving better than receiving? Maybe not.

If you've tried to give something to someone and they won't accept it, you know exactly how it feels. We're not talking about something creepy here. The stranger off the street is wary even if you're handing out $100 notes, as giving has to have some trust involved. Even so, receiving is highly underrated. Let’s find out why.

If a burglar were to break into our home, he would be slightly confused.

As you get to the chest of drawers and open the first drawer, you find a hoard of chocolates. The drawer to the right of that one also contains bars of chocolate.

Both the ones under it have chocolate too. A burglar is looking for valuables to steal, and drawer after drawer seems to reveal yet another hoard of chocolate.

“Someone sure has a sweet tooth”, you'd think to yourself if you didn't already know us
If you know us, you'd know that the chocolate isn't for us. Instead, it's for everyone else. Every year, and even in pandemic times, about 300-500 chocolates make their way to clients.

Members who join our membership site at 5000bc get a bar of chocolate, as do those who send feedback about glitches on the site. Those who attend courses also get chocolate, and yes, of course, those who come to workshops.

“Well, that makes sense”, you may think to yourself

These are clients, and we all have a good sense of the concept of reciprocity. Giving isn't a one-way street (in most cases). When you give, people often feel the need to give something back.

As impressive as it is to experience the power of reciprocity, that's only part of the reason why giving is so powerful. Let's dig a little deeper into “giving”, and while we're there, let's also circle around why “accepting” is just as important.

1: Why giving creates goodwill
2: Acknowledgement of the existence of another
3: Why “accepting” is crucial for society

1) The principle of goodwill

Around 2006, we got into an argument that we hadn't started.

We were having a workshop in Campbell, California, and after the workshop, we decided to have a smaller, two-day session for a few clients.

We rented the boardroom for two days, and that's when I made my first mistake. Since we were going to be such a small group, and since many of the clients were travelling with their spouses, I told them they could bring the spouses along for the two-day session.

The wife of one of our clients stepped into the boardroom and backed out almost immediately.

“I can't stand the smell of the new carpet,” she said, raising her voice. The boardroom was right next to the reception. Without warning, she turned to the staff at reception, demanding that they give us another room right away.

We were in a bit of a soup

With just minutes to go before we started our session, there was no warning whatsoever. The woman was not willing to negotiate, either. We were a tiny group of just six participants. If she couldn't stand the smell in the board room, we could create a makeshift area in one of the hotel rooms.

A quick set-up of the whiteboard, and we could be rocking and rolling. However, for some inexplicable reason, she wanted a “proper” room and turned on the staff, criticising them for not giving us an “acceptable” space.

That “timid” person then gave us an option. There was an unused board room in the hotel. It was pretty huge, and we'd feel the excessive space. However, it was workable, had no new carpet, and could use it if we chose to do so.

By this point, the screaming spouse had rattled everyone, and we trooped up to the room and went ahead with the sessions. We didn't think of the timid staff member until much later.

When the day was done, we bumped into her in the lobby

As it turned out, she wasn't a “timid” staff member. She just happened to be a rather unassuming general manager. While we were eager to apologise, she waved the matter away and instead thanked us for the chocolate.

Chocolate? What chocolate? Yes, of course, when we travel, we take 20-30 bars of New Zealand chocolate along as well. Waiters, random staff and people at the reception get a bar of chocolate once we've settled in. As it turned out, the general manager was one of the “reception staff” who'd got a bar of Whittaker's chocolate as well.

The room we were originally booked in was plush and comfortable. The hotel was under no compulsion to offer us a separate room. Yet, a single bar of chocolate had built an enormous amount of goodwill well in advance.

In many situations, gifting is done because we know the person, or in some cases, because we want something in return. Yet, you, me, all of us should constantly be working on goodwill.

You know that in most cases, those people can't give back. It's a one-way act of giving. And yet, you'll see how a lack of goodwill can turn against you over the smallest of things. Last week, for example, the kid across the road was playing Tim the Toolman Taylor.

He'd gotten up on the roof and was putting up an array of Christmas lights. It seemed like the perfect moment to get out and take a picture. I walked up, asked his permission, and he agreed to the photo being taken.

Then his mother showed up.

The family lives bang opposite our house. We're out on the street a lot, but apparently, she had no clue who I was. “You can't take a picture”, she said to me flatly. Would that situation be quite a bit different if she'd known us?

It could go either way, but without goodwill, the odds are against you. They'd moved in about a year ago, and if we'd given them a cake, or even a bar of chocolate, things would have been different.

Giving—and even goodwill—sounds creepy because it seems like there's an agenda in place.
Yes, of course, there is an agenda. If you're a hermit, living on an island all by yourself, you may be excused from dealing with society's core values. However, if you're a normal human being, giving becomes crucial, but goodwill is probably the most important thing you can do.

Even corporations realise the power of goodwill in their balance sheets

If you were to buy a company today, you'd probably look at assets and liabilities. Yet, right in the middle of it all, is something called “goodwill”. It's considered to be an asset. Without the goodwill of your clients, family or community, you'd find the world to be a much more complicated place to live in. Giving—in most cases—creates reciprocation.

However, getting the goodwill of another human is what we should all be looking to cultivate. Not just at festival time, or some special occasion, but though the year. If you can't think of things you want to give, maybe raid the food store and get yourself several dozen bars of chocolates.

If a burglar breaks into your house, that burglar might be super-confused too. 🙂

And on that weirdly happy note, let's dig into the next two points. We'll cover why giving is an essential acknowledgement of the other person. And yes, why receiving is just as important, if not more important than giving.

2) Acknowledgement of the existence of another

You likely deal with people every day. Maybe a waiter at the restaurant, perhaps the shop where you buy your groceries. Do you know their names? Sometimes you do, but perhaps you don't.

But what if you went one step further and gave them something small? Giving has the power of radiation. You give something, and it brightens up their day, and in turn, they often pass it on. But giving also tells the other person that they exist.

Giving something out of the blue acknowledges that the other person exists. It's a power all of us have, and we can give something at least once a week. However, to do something like this, you need to be more organised. We are so obsessed with how tired we are, how needy we are, that we forget to make the world a lot better.

Giving is a selfish act. It makes us feel better.

And this takes us to the third point, which oddly is about receiving.

3) Is giving better than receiving?

Maybe not. If you've tried to give something to someone and they won't accept it, you know exactly how it feels. We're not talking about something creepy here. The stranger off the street is wary even if you're handing out $100 notes, as giving has to have some trust involved.

Even so, receiving is highly underrated

When someone doesn't take what you have to give, it seems like a small rejection. Theoretically speaking, it doesn't seem like a big deal. Let's multiply that one person's rejection across a million people and what you're starting to notice is a breakdown of convention, and finally, society.

If enough people decide not to take what you're giving, there's no social contract.

They don't owe you anything, and no reciprocity is needed. It's everyone for himself. Left unchecked, it's not hard to imagine the complete breakdown of society.

When you see someone that gives, you think there's a great deal of generosity in place.

Yet, the act of receiving is also just as important. Of course, it tips the balance. Of course, you feel that you have to give back. Yes, it's how society works and how it makes us less selfish as a whole.

Giving and receiving is easily the glue that keeps us all together. Let's give. And receive 🙂 And create a whole lot of goodwill along the way!