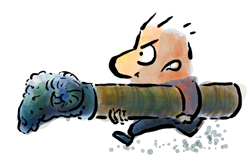 Where did you start your podcasting journey?

What is your podcast strategy?
What do you use?
Do you outline?

Slow down. Yes, do slow down.

Podcasting is like everything else. Work, lots of work. But also a lot of fun. So here's the abbreviated story. You're welcome to ask more questions because I do have the answers.

So let's start at the top.

When did I  started podcasting…

I think I started doing videos before podcasts. And around that time, there was this cool “scrolling software” like they use in television studios. You put in your text (pre-written, of course) and the text would scroll. It's called a teleprompter. And I loved the software.

For about three days, that is…

After three days it was a pain.

For one, I had to write out all the text. And then I had to put it in the software. Then work out how to read it without sounding I was reading. All good training, I suppose, but still a pain. It would have been so much nicer if I could simply speak into the microphone and make sense.

But hey, I do make sense

I talk to people all day long (when I get the chance) and I make perfect sense. No teleprompter, no script. I'm doing just fine. So maybe I'm quite good at this, I think. I just don't know how good. And so I started out little pieces. Instead of a 15 minute podcast or video, how about a 30 seconds without falling apart?

For one I had to remove all the “ah” and “um” and “like”. That's easy, really. And there's a method for doing just that. But other than that, I could go from 30 seconds to a minute, to two, to five. Pushing the boundary just a bit and keeping the teleproblematicmachine at bay.

Besides, without that telemonstracity, I could twist and turn, should I need to, in the midst of a sentence. I was no longer a captive to the words on screen.

That was some time ago. And here is my current adventure with podcasting…

I've done hundreds of articles. And at least a hundred audio episodes. And if I just rock up and do my thing, it's going down the gurgler for sure. I can get away with it in an interview, but the moment I realise I can't ramble, the outline is critical.

But it doesn't lend itself to audio. Or video (which is really mostly pictures with audio).

So the outline is pretty much the same as an article for an outline.

Not a lot different, really. A bunch of points, on a Post-It® so small, that the girls at the cafe cringe. Surely I would need a bigger Post-It®, they say. But no, I'm good with the tiny, writing and the outline is done, dusted and ready to roll. Having a Post-It® also helps me stick it nice and close to the microphone where I can see the darned thing when speaking.

2) And knowing your software is critical too

On Garageband, which I use to record, “R” starts the recording. Spacebar pauses it. Even if I go mumbling away, I can stop, go back, and re-record. Having to record more often than less, forces me to know shortcuts. It forces me to explore how to save time, and yet improve quality.

I still take 30 minutes to record a 15 minute podcast. Sometimes on a bad day, it's 45 minutes. But the bad days and good days depend on the strength of the outline. The more stupid and foolhardy I am, the less I am prone to depend on my Post-It®.

Then, all hell breaks loose and 45 minutes later, I'm feeling the full strength of my stupidity gene coming to the fore.

So yes, I outline. And yes, I learn my software.

3) And yes, I try and record while the idea is super-fresh in my head.

Oh, I didn't mention that, did I? The idea being fresh in your head is incredibly critical. If you've ever been exposed to one of those Big Macs (that last forever), well, that's not how an outline works.

Once you're all charged up about a topic, you start to write it down. Get it on the Post-It®. Then, the sooner you can get it in an article, podcast or video, the better.

Your idea is a bit like sushi. Wait for a day and it's not that good. Wait a week and it's decomposed rice and super-smelly fish.

4) Which brings me to rehearsing

Even the super-pros like Ira Glass (who's been doing radio since who knows when) does a few takes.

And you and I don't have time for many takes (I don't suppose Ira has, either). But nonetheless, expect to suffer a bit, because  the suffering builds character. And yes, you do get better. A lot better.

5) Of course, output is dependent on input

If I'm doing podcasts, I need to listen to podcasts. I get ideas of how they're constructed. I learn to hate what I hate, with a passion (and avoid it on my podcast). And I figure out things I haven't thought of before. Besides a podcast will seep into you.

Like some insidious drug, you'll find that you're “copying” (horrors) their style.

But over time, and if you're smart, you'll listen to a lot

Then the styles merge, marry and break up and what you get is an amazingly crazy style of your own. Of course, you don't fall in love with your style. Push the boundaries—don't be the Monkees, be like Sting or Paul Simon. Scare yourself. And your style will start to do its own tape mix (you know what that is, right?) and it will evolve.

Life is good. A bit on the edge as always. But life will be good.
And especially when you learn the short cut for ®.

The link for the “ums” and “ahs” and how to get rid of them is here:
Psychotactics: Removing Ums and Ahs from Speaking …

“I've known Sean for the better part of a decade. What Sean shares in this podcast is not some pitch from someone who claims “success” but the passion of a fellow human just a little further along on the journey.

Sean truly wants to help you get what you deserve and you deserve to spend a few moments gaining from the insights he shares on these podcasts.”