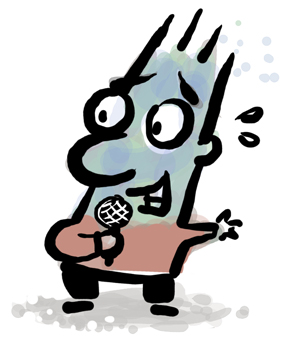 There's a difference between presenting and conversation.

Do you know the difference?

The presenter's tone is almost like a parent's tone.

It's telling you to do this, and do that. It follows a script that's either in the presenter's head or on paper (if the person is reading off a script). And that tone while acceptable is not ideal, because it seems to treat the audience like they're kids.

Now we both know you don't want to treat your audience in that fashion, but invariably that's exactly what you and I do. We talk down to the audience. We tell them what to do. And we don't even realise that we're doing this talking down.

So how do you move from the presenter's tone to the conversational tone?

You first have to notice how we speak.

And the best possible way to understand the concept is to listen to someone. When you listen to someone, you'll notice that they don't speak with an even tone and delivery. In this article, I'm talking not about tone, but delivery.  And how do people speak on a day to day basis?

There are gaps of silence. And then sudden bursts of conversation. There's a snicker, a giggle, even a smile. This is how we speak every single day. We don't speak in a continuous, reader-like or even presenter-like fashion.

You'll notice that the TV presenter does modulate his/her tone going up and down, based on what they're reading. But the pace of delivery is constant. Then as you go to Oprah or Ellen, the pace of delivery changes. They're having a conversation. They're not talking at the audience, they're talking to one person.

As I mentioned before, it slows down. It speeds up. It's even quiet sometimes.

And this is the pace of delivery you need when shooting video or when speaking on audio, even if you're reading from a script. You need to force yourself to be ‘human' instead of being a ‘robot' rattling off the words on the page (on from your head as the case may be).

It takes work to make this switch

We're so used to shifting gears from conversationalist to speaker/reader that we don't realise we're talking at the audience. The audience doesn't need a lecture. It needs a conversation. A conversation that's one on one.

Next  Step: Listen and read —Preacher or Teacher? Why Our Clients Struggle To Learn Skills Quickly

P.S. Don't forget to read this special report to find out if your headlines are working for you—Why Headlines Fail?
Most people think headlines are some mumbo-jumbo. In reality, it’s a science. And it’s not hard either. So read this tiny booklet right away.