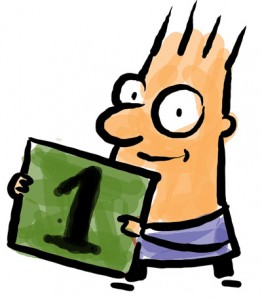 But he sure as hell was creating a ruckus as we sat down to our bacon, eggs and steaming coffee on a lazy summer's Sunday.

You see, Felix wanted bacon. As a kitten, Felix had been given tiny scraps of bacon as a treat. And if you made the mistake of having bacon for breakfast, Felix would be there, mewing loudly, as he was on this particular day.

As was often the case, Felix got his fair share of bacon, but he wanted more. And after a while, there wasn't any more bacon to be dished out. We'd finished it all.

Of course Felix wasn't convinced. He could still smell the salty aroma of bacon in the air. And as far as he was concerned, we were just being selfish.

So Felix simply turned up the volume. His meows grew louder and more demanding. Till in exasperation, Felix's owner literally put an empty breakfast plate before Felix's nose and eyes.

The cat sniffed the plate, looked around its perimeter and stopped mewing. In one second, Doug had managed to use a simple tactic that had stopped the cat from driving us crazy. In that second, Doug had used a psychological factor that can have important ramifications for your business. The logic behind the ‘plate-in-the-cat's-face' tactic could potentially make hundreds, if not thousands of dollars for your business.

You're dying to know what this tactic is, aren't you? You're not alone. The very same tactic that convinced Felix the cat was used by Corning Glass to sells thousands of dollars of safety glass. This amazing tactic can convert your so-so prospects into loyal customers.

And once you understand this powerful psychological tactic, you can then apply it to your website, your brochures, your presentations and all your marketing.

So what's the tactic that's so very important to learn?

Why Demonstration compels clients to buy

The executives at Corning glass were astounded.

Somehow it seemed that one of their salesmen was selling far more glass than any of the other members of the sales force.

You see, Corning glass had just developed the safety glass and were introducing the concept to prospective customers. At the time, the concept of safety glass was new and customers were very skeptical about this new type of glass. In short, sales weren't exactly going through the roof.

Yet there was one salesman (let's call him Martin) who was filling in orders like greased lightning. And that left the executives at Corning glass flummoxed. How could it be that Martin was so far ahead of the rest? What strategy could Martin be using that was so very compelling? Why were customers lining up to buy from Martin while they seemed lukewarm to the rest of the sales force?

Martin was smiling like a Cheshire cat as he went up to receive the top salesperson of the year award. Using one simple strategy, he'd gone from Clark Kent to Superman. From a so-so performer, to the superstar everyone adored. Even envied.

The resounding applause from his peers and his bosses was still ringing in Martin's ears as he stood on the podium with his trophy and his nice big cheque.

As he looked around the room, he could see question marks hovering over the heads of everyone in the auditorium. Martin smiled quietly to himself knowing his secret wasn't going to be a secret much longer.

He knew they would all want to know. How? How on earth was Martin able to sell so much more product than any body else?

You could've heard a pin drop in the audience as Martin's secret boomed across the public address system.

“First of all, I got some pieces of safety glass cut into 6″ X 6” pieces as samples. Then, I got a ball peen hammer. I'd walk up to a prospective customer and say, ‘Would you like to see a piece of glass that doesn't shatter?'

When the prospect says, ‘I don't believe it,' I put the glass on the counter and I bring down that ball peen hammer hard on the glass. The prospect reacts instinctively, shielding his eyes from the inevitable shattering of glass that is to follow. Of course, the glass doesn't shatter and the customer is really impressed. “Wow!” says the customer, “That's incredible!”

Then I'd say, ‘How much of it would you like?' And I'd pull out my order pad and start writing the order.”

Naturally, Corning Glass was so impressed with Martin's strategy that they equipped all their salespeople with ball peen hammers and sheets of glass and sent them out.

And the sales curve went into orbit.

So how do you use demos to send your sales into orbit?

Hint: You use demonstration instead of explanation.

A powerful demonstration snaps a customer out of her reverie, because of one simple reason. Explanation is nice but not va-va-voom. It's monologuish (I made up that word). It's pretty one way, if you know what I mean.

Demonstration on the other hand, begs for involvement. And involvement as we know is a very persuasive selling factor. The more your customer is interested, the more they're likely to eventually buy. Of course you know how to demonstrate in person. You're just wondering how you'd use demonstration in different mediums.

Example 1: On a website
Example 2: On a brochure
Example 3: In a live presentation

Anyone want to go wine surfing?

Let's look at a website selling wine. How could you engage a person with a demonstration? If you're a geeky sort, you'd be thinking of some whiz bang Flash based animation, right?

If the customer chooses the wine bottle with the fancy label, the link takes the customer to another page where you gently remind that customer that looks ain't everything.

Some of the most splendid, lip smacking wine comes from boutique vineyards. Usually the second cousin of the owner of the vineyard has designed the label to keep costs down.

If on the other hand the customer picks the plain looking wine bottle, you do the congratulations-mah-friend-we-have-a-winner bit! And explain how good wine needn't necessarily have great packaging.

You see? You're involving the customer. They're going clickety click on the links and educating themselves. Ergo, demonstration. You've given the customer the chance to get a little smarter through your little demonstration.

But how does this demo concept translate to a brochure or an ad?

Let's see. You've taken the same two bottles from Example 1 and positioned them on Page 7 of your local newspaper. Your ad headline simply says: Which of these two wines would not embarrass you? To find the answer, go to page 9. The reader goes to page 9, where the ad continues.

And no, you don't have to reinvent the copy.

Just use the concept we used on the website. Educate your customer that the best wine isn't always found in the fancy bottles. Once you're done with your education, give the customer an incentive to call or email. And bingo, you're on your way to demonstrating your point on paper.

The fact that the customer has to get to the answer on another page is the involvement factor.

Of course, there ain't nothing better than the real thing

A little cheese and crackers, some upbeat Duke Ellington and over the clinking of glasses, you can quite comprehensively demonstrate how one wine is far superior to the other.

But what if your product is not glamourous or portable like wine?

Yeah, like what? Let's say you're selling energy savings for homes. That's pretty unglamourous isn't it? Abstract too. Until you get the electricity bill, that is.

And you've shown proof. You've demonstrated through the medium of electricity bills, that a home could save hundreds of dollars each year on better energy systems.

You might think you need to be some knockout creative type to come up with an idea that compels your customer to look up and pay attention.

News flash for you: You don't need creativity!

You just need to find the drama in your story. Notice how mundane the above examples were. (There was nothing fancy about electricity bills, was there?). Yet the examples captured your imagination in a vice-like grip.

You wanted to know how to choose wines didn't ya? You so wanted to drastically drop your electricity rates, didn't you? And in both cases, the demonstration factor got your attention instantly.

Demonstration requires no creativity. No siree, it doesn't.

Demonstration does require one thing though…

A one thing called ‘Involvement'

Demonstration isn't just show and tell. It's show and tell and roll in the barn with me. That's what it needs. Do you remember the ancient saying: “Tell me and I'll forget; Show me and I may remember; Involve me and I'll understand.”

In each of the above examples, you noticed the customer had to do something. They had to click on a web link. They had to go to page 9. They had to drink the wine.

Don't forget the power of props

A prop is a very powerful tool in getting customers involved. If I can touch, feel, taste, and experience a product or service, I'm more likely to buy as a customer.

Service, did you say? How do I demonstrate a service?

Oooh, did you miss the last paragraph? Use props. If you're an accountant, show a prop of a mansion vs. the poorhouse. Explain to your customers that depending on the tax decisions they make they can end up in one of those two places.

Go to the toy store down the road and find two doll houses. Then use these doll houses in your live presentation. On your website. On your brochure.

Services aren't as abstract as you think. A prop will get you a powerful persuasion tool that customers can see, touch and get their imaginations running wild.

Oops, it's time for some work

And remember the next time you want to get a point across, use the compelling power of demonstration and involvement.

It works well for clients.

Recommended Product: Why Customers Buy (And Why They Don’t): The Brain Audit