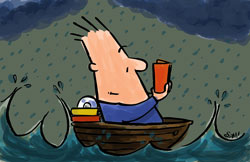 The world was flat.
Now it's round.
Who knows? Maybe it's square.

Research helps. But there's a problem with research.

And when you’re writing an article, it’s easy to want to absolutely nail the article down with irrefutable research. So you spend seventeen hours (or seventeen thousand hours, as the case may be) and you come up with data from books, white papers. Or just stuff you find online.

And part of the problem with research is:

1) Research is often funded by lobby groups.
2) Information passed down can miss out relevant bits.
3) Facts that we know about aren't valid any more.

You know the groups. They are like you and me. They have an agenda. They want to sell something. So they make you want to like milk, or spinach or whatever. They fund research; they pour squillions of dollars into it. And all it proves is one thing: That whatever they're selling is good for you.

Of course you don't see the research that way.

The way the research is presented is in a nice, interesting fact-driven way that makes you believe in the product/service. Suddenly your perception changes, because as human beings we only have to be given facts and a truckload of statistics, and whoops we change our perception. Lobby groups aren't some insane bunch of people. They're just like you and me. We turn to our kids and tell them to eat spinach so that they can grow tall and strong. And the kids buy it.

And sometimes it's not written in stone. Which takes us to our second problem.

Problem 2: The data is hand-me down

Take your tea bags and use the tea in them to polish hardwood floors. Put turmeric and honey in hot water and drink it. And your cough will go away. These are hand-me down facts. They work. But do they work for everyone? And are some of the details being missed out? Who knows? It's impossible to tell and at best the details remain more or less accurate. Or inaccurate, depending on the situation. The problem is that you can go online today, find these facts (after seventeen hours of searching) and then believe them to be true.

And the fact is the facts often have holes in them.

You can't necessarily trust that what you're reading is correct and will work for you. So the only way to find out is to make it work for you. You take those tea bags and polish a part of your hardwood floor. Does it work? Do the floors shine? Ah, now you've got a personal story of your own. You’ve got your own hand-me-down tale to tell.

Let's just hope it doesn't get distorted along the way, shall we?

So that's the problem with hand-me down data. It looks very valid indeed. But unless you try and prove it to yourself, it's something you need to take with a pinch of salt—or turmeric

And that takes us to the final problem: The data keeps changing.

Problem 3: Facts that we know aren't valid any more.

As recently as the year 1980, most neuroscientists believed that the brain was non-plastic. Plasticity means that the brain is adaptable. That damage, strokes and other horrible things that could ruin a brain, are not permanent after all.

There's now research (yeah I know the irony of using the word there) that there was tissue damage of 97% in one brain area which should have rendered the patient incapable of doing anything.. And yet the patient re-learned everything: to crawl, walk, and then live a pretty normal life.

I want you to understand one thing. These were neuroscientists. They live, breathe, and map their entire careers around research. And they were wrong. The brain is plastic. We know that now. But hey, that data changes as well. And who's to know what's going to come around the corner?

So does this mean you should not use research in your articles?

No it doesn't mean that at all. All you need to understand is that you can't be spending those all those hours tracking down facts. Because often these so-called facts are wrong. And then there's the issue of fluid facts. Facts change as we get to know more. And really what applies to one person is not going to necessarily apply to you.

If someone says they got a 33% increase in turnover, it's not going to apply to you. That turnover increase was based on a certain strategy, in a certain market, at a certain time. It sounds like a fact, and it is. But it doesn't always hold good for everyone. Researching information for your article makes it look great, but be aware that data is a moving target.

This may look like a research-bashing article when in fact it's not.

It's just a bit of advice to avoid spending endless hours trying to find research that may be flawed in the first place. Go ahead, do your research, but put an egg timer. If you don't get what you're looking for in about 22 minutes, it's time to get your own facts together. No, don't make it up, but tell us your own experience. In reality it may be better to simply write what you know because it makes for a good story and as you know, stories have facts.

Research makes things interesting. So if you find it, use it.

But your own case-studies are just as interesting. So don't be bashful. Use it more often.
It saves you time. And yes, you may be wrong.

Well, so were the neuroscientists. So you're in good company.

” I was half expecting more confusing jargon and another complicated strategy involving questionable tactics.”

By the time I ordered The Brain Audit I had already read a few ‘how to' marketing books that had made the usual promises, and I was half expecting more confusing jargon and another complicated strategy involving questionable tactics.

To my real surprise I found The Brain Audit was based on a clear, understandable, easily implementable set of steps, that made real sense. I read the book the first time in just one sitting and was left feeling as if at last, finally, the sun had come out from behind the clouds.

I recommend Sean's Psychotactics.com and The Brain Audit to most of my friends in business – but NOT to those in the same business as me…

Judge for yourself The Brain Audit: Why Customers Buy And Why They Don't

“5000bc is without a doubt the best value in a marketing subscription that I've ever seen. Plus, it's affordable even if your just starting out.”

“Nothing is held back, you get a real inside view of Sean's business model. I actually understand how his business works and can apply many of the same concepts to my situation.”

5000bc now has a Waiting List.
The waiting list joining time is approx. 30-45 days. So if you are serious about getting your business to the next level, get on the waiting list now.

1) NEW! Do You Often Hit A Wall Called ‘Writers Block'?
Learn how the core elements of outlining can save you from the misery of writing your next article.

3) Does your websites, brochures, presentations, etc… confuse your clients?
Put some sanity into your design, even though you are not a designer?

4) Get ready for 2011!
Year after year you sit down and create a list of things you want to achieve. Then suddenly it's March, and you've not really moved ahead as you'd expected.
Learn Why Most Planning Fails: And The Critical Importance of Chaos in Planning.