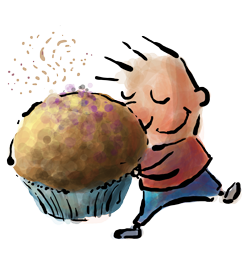 The short answer: With a lot of difficulty.

But seriously, 100,000 steps a week is a whopping 14,000 steps a day. And to get motivated to do something like that is close to impossible, right? Yes it is, unless you have a ritual.

So what is a ritual?

Religions understand this best. They make sure you come back time and time again to do something on a very regular basis. In the Catholic religion, this might be a ritual such as communion, or offering peace to each other. But other “religions” also have a ritual. A group of small businesses might start their Friday having breakfast, and then networking.

It's also the reason why my wife and I end up doing over 100,000 steps a week, is because she wants to get to drink her coffee, and watch the sunrise.

Without the coffee, the sunrise (or the steps) are a lot less appealing

That's because the ritual takes centre-stage. Yup, you read right. It's not the product or service that matters as much, as the ritual itself. And we know this to be true, because you take away the ritual and a sense of disappointment wafts over almost instantly.

This means that without the coffee, the walk is not so interesting. Without the communion, it seems like the mass is very incomplete and the breakfast before networking becomes far more critical than you'd expect.

1) It's recurring
2) It's not usually the main product/service/event.
3) Without the ritual, there's a feeling that something's missing.

Let's take some examples from Psychotactics to understand this concept better

In Psychotactics courses, we have a ritual. It's called Friday. And as you go through a course such as article writing, cartooning, headlines etc. you will find that Friday involves no assignment. So if you're writing articles all week long, you don't write an article on Friday. Instead all you do is share your learning for the week. Once you do that, you get a gold star.

Surely a digital icon like a gold star isn't that important, you'd think…

Yet week after week, participants rally around the Friday cooler to get their gold star. The gold star becomes a validation that you've done your assignments and you deserve your reward.

So does the gold star have anything to do with actual article writing or cartooning? Not at all. It's not part of the main product/service or event. And yet, it's a critical recurring phenomenon.

You may think it's silly to hanker after a gold star, but all of us want validation and this “award” ritual is what keeps customers coming back time and time again. In a few weeks, the clients expect the learning and the consequent gold star and if I should forget (I don't forget, but I might have in the past) they will remind me, because they feel something's missing.

If you're a member of 5000bc, you know that there are detailed free reports on topics such as viral marketing, pricing, headlines etc. And you also know that the report vanishes after a period of time, and it's no longer free. In effect, you could call the Vanishing Reports a ritual.

But they're not. Remember the three elements that need to be in place? Yes, the reports are more important than 5000bc itself. And, if the reports don't show up, there's something missing, but the third element is also important: Is it recurring?

In fact, the reports aren't always consistent. Sometimes there's no report for a month and at other times there are five reports. And this means that a ritual isn't being put in place. If the report arrived on the first and third Friday of the month, that would set up a ritual. Is it Friday? Is it the third Friday? Let's go and check out the report, even if the notification for the report isn't showing up in email..

Now the moment you read this, you'll wonder how you can apply this to your business

Duarte Design is a company that creates great presentations. Where's the opportunity to create a ritual? And yet they have a ritual: it's called Halloween. Year after year they have a pumpkin carving competition that grows in popularity.

A law firm I once consulted with would have a special wine evening twice a year and layout a super-spread. The Grammys and Oscars have the ritual of the after-awards party that no one would dare miss. So whether it's a tiny competition, a party, a gold star or even a fixed routine, you can, with a little thought set up a ritual of your own.

Some businesses may require the ritual to recur frequently. Others may require it to be just once or twice a year.

The reason why we end up at the cafe day after day, no matter what the weather, is because one of us will motivate the other to go. The same applies to the networking group or folks on any of the courses.

If the ritual is kinda solitary in nature, it's easy to die a quiet death, but the moment it's somewhat group-based, the members of the group feel the need not to let the others down. And so they show up and most often feel a lot better for having shown up.

But slip in a recurring ritual, and voilà, it might just work!

Next Step: The Secret of How To Get Clients To Keep Coming Back Repeatedly