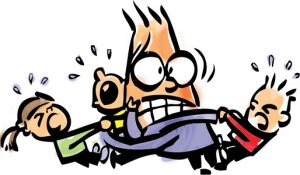 There's a legendary story about a French Bank.

Apparently their elderly customers took up too much time dealing with the banking clerks, and did little business of value.

So the bank decided they wanted to give the elderly customers the ol' heave ho.

But how do you get rid of elderly customers without igniting a PR bush fire?

You simply increase the height of the steps.

They merely raised the height of the steps that led to the bank. The elderly customers were distraught; angry; frustrated. And one by one, these customers decide to move their business to another bank down the street.

Progressive Insurance did one better

They moved their agents off the street completely.

Not surprisingly not all motorcyclists have kamikaze brains. Progressive found that older motorcycle drivers tend to be very safety conscious, and therefore better-than-average-risk.

So Progressive hid their signs

They advised their agents to locate themselves in offices off the street; in office buildings that would be a bit of a mission for customers to find.

Because when the insurance company dug deep, they found that most of the customers who came off the street, were pretty much the same customers who made the most claims. By eliminating the off-the-streetcustomer, Progressive took home a bigger paycheck and were able to service their existing clientele a whole lot better.

Which is why Lexus profits keep jumping off the scale

Lexus and Infiniti were interested in wooing a similar target audience–namely clients that lurvvved luxury cars, and were willing to pay the big buckeroos.

Um…Except for a tiny difference in qualification

Infiniti went after customers that drove BMWs and Jaguars.Lexus stayed back and put out feelers for those who owned Mercedes and Cadillacs.

Lexus' customers were historically the most loyal in the industry. They were very hard to convince, but once convinced,they became fierce evangelists.

Infiniti's customers seemed just as loyal at the start, but soon became more demanding as they constantly badgered the company for trendier styles and greater performance–thus leaving Infiniti with a monster migraine on their hands.

Are you driving to migraine city as well?

You wouldn't pick up the next date that walked through your door, and yet, you have no qualms in accepting any client that comes your way.

Needless to say, you'll inherit the Infinite migraine. Your customers will push you around; not pay the invoices on time; and end up being the most pedantic, irritating pests on the planet.

The way out is to create barriers

Create a system that filters out customers, before they become headache clients. Some of the best ways to filter a client is to create a barrier with a form.

It's boring. It's tedious and we only do it because we know, we have to fill the darn form. But in doing, we indicate our seriousness. We fill all tax forms in the greatest detail. We fill in forms that get us to school, university, marriage and divorce.

But before you pull out the forms, do one more thing

Sit down and work out exactly who you'd like as your client.Who is that person? Is it a Mercedes owner or a BMW owner? Is it the motorcyclist off the street or the older motorcylist?

Once you've qualified who you want, get the clients to qualify themselves.

Whip out the form. Get the clients to give you the information you need. And do it today.

Raise the height of the steps in your company too. And you'll quickly get customers that you adore.

And who adore you in return.