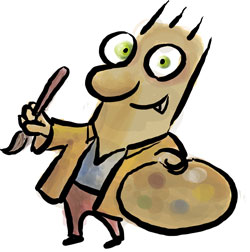 If you go to any school, in any country, you'll find one thing consistently

If you were to go back to that class a year later, and you asked the same question, you'd find that at least 30% of the students don't feel so confident at drawing. If you were to then visit the class on a recurring basis till all the kids were about 10 years old, you'd find that you'd get diminishing percentages (that is, fewer and fewer kids who can draw).

By the time all the kids have reached ten years of age, you may find that the percentage of kids who can draw have gone from as high as 100% to as little as 2% or even zero.

So what happened? Did the kids suddenly get “stupid” with drawing?

Let's put that question aside for a moment and look at their reading and writing. At the age of five, almost the entire class can barely read or write at all. At best, they can recite the alphabet, recognise numbers and possibly read a few words—if at all.

Almost the entire class is exceptionally crappy at writing—struggling to even roll from A-Z without their writing looking like gibberish. Then go back to the class the next year and the next and the next.

If you were to visit when all the kids were ten, you'd find what you're already expecting: All the kids (except those with severe disabilities) can read and write.

So what is the difference between reading, writing and drawing?

The answer is: There is no difference.

Reading and writing is considered critical to your future, so everyone from parents to teachers, even your peers, push you in the direction of reading and writing. A child spends at least an hour or more every single day learning the skill and practicing it.

But what about the 1% who draw despite these barriers?

They draw because of several reasons. The biggest factor is simply one of encouragement. They draw, they're not a menace to society, and so their families encourage them to continue drawing. If the family beat them up every time they did a drawing, the child would quickly learn “not to draw”. But many kids are shy and drawing becomes their outlet.

And in the hands of the right teacher, right person egging them on, they continue to draw spending several hundred, even thousands of hours learning and honing their skills.

So does it require thousands of hours to learn a skill?

No it doesn't. It requires thousands of hours to become an expert in the field. Anyone with reasonable practice can learn in the hands of the right teacher, the right method and the right media.

In fact in fewer than six months a person can go from zero skill in a specific field to incredibly competent. They can't reach genius level, because genius level just requires enormous practice. When you compare yourself with the top stars in a field or even the mediocre stars in a field, you're making an incorrect comparison.

The comparison is you having spent ten hours with dubious methodology learning a skill vs. an expert spending thousands of hours with precise methods learning the very same skill.

So what's required to acquire a decent level of skill really rapidly?

As I mentioned before, it requires:

Most teaching is done with big leaps. So pick up any book on any subject from carpentry, to Photoshop to cartoons and you get the same problem. The teacher tries to drive home several points in the same book/audio/video.

Yet no such system of education exists. Instead all we have is rush, rush, rush. Don't believe me? Pick up a book on how to paint watercolours for instance. Your eyes will soon glaze over as you get hit by several concepts like unity, counter balance, value, focus point and dozens of other terms. And this in a beginner course or beginner book. Is it any wonder that learning is difficult, if not terribly tragic?

To the average person this slow advancement may seem way too slow—even a waste of time. But it's how the brain learns. It's how kids learn to read and write. They take years. And they get there.

So who are the kids who can't read and write?

Those who stop. Those who don't practice. Those who are not encouraged. Those who are beaten senseless at home because of drunk or abusive parents. Those kids will never be talented at writing and reading. They'll never go to the fancy colleges. Those kids have been deprived the ability to “acquire” talent.

And yet talent can be acquired

And acquired speedily. But first you have to throw off the shackles of believing that talent is inborn. If you believe in that, you believe that nothing can change you. And that's your choice. For those who believe in acquisition of talent, it's just a matter of finding the right teacher, the right method and the right media. And daily practice.

Which means you can learn to draw, or cook, or do whatever you jolly well please.

How liberating is that?