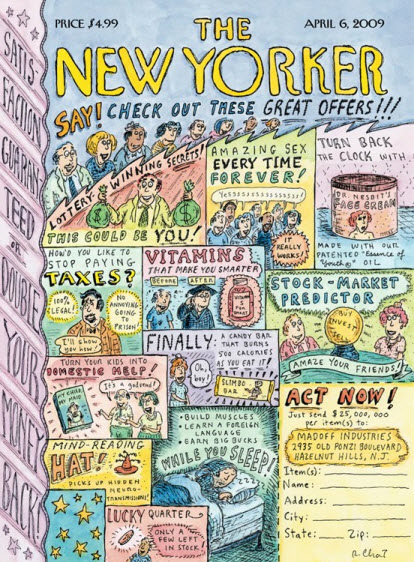 I love the New Yorker (I've been a subscriber for years—yes I get it all the way to New Zealand). And this cover summed up perfectly what I wanted to say. Saved me having to draw a cartoon instead.

In the year 2003, I went to a presentation in Australia.

There were 450 people in the room. And two fancy cars (yes in the room!) And then the speaker ran from the back of the room to the front, amidst thunderous applause.

Five days later, I was $10,000 poorer.
And none the wiser. I’d been suckered by a get-rich-quick scheme. And if you’re feeling a little superior at this point, I don’t blame you. But when I started out in business—and for a few years after the starting point—I was quite concerned about getting enough dollars in the bank. Actually, if someone promised me some crazy scheme to improve my bank balance or customer acquisition rate, I was more than likely to look their way.

Hard work was intoxicating.
But sitting in the ‘counting house’ counting money was frankly even more appealing. I frankly don’t know how much money and time I spent before I got wise. Or should I say wiser. The moment of wisdom came when I started recognising the red flags.

I realised I was trying to learn the tricks of the trade. And the people who were teaching me (or trying to teach me those tricks) were Ponzi schemers. They’d take my hard earned money, and then get me to follow their methods. I would then have to turn around and do the same lecherous activity.

And frankly it sickened me.
I realised I didn’t want a big yacht. Or a jet. Or twenty thousand X-Boxes. I didn’t want to surf on the waves all day. Or frolic in palm grove coves.

What I wanted was far simpler.

And I wanted to know that my future was getting more secure with every passing year.
Hard work didn’t scare me. But I wanted to work fewer hours if possible. And I wanted lots of time to just sit and do nothing but read, or drink a Leffe Brune.

Of course things didn’t get better right away.
In our first month at Psychotactics we earned just $28. I don’t think it got much better that year, but with every passing year, the simple dream seemed to get momentum. And over the last seven years, we’ve gotten to a stage where we’d do fine even if we took a year, two years, even five years off. Of course this healthy state of affairs gives you loads of time to think.

And in this time I’d get mad at the get-rich-quick merchants.
Until realisation dawned on me once again. I realised that these people had a purpose in life. They were simply doing the rest of us a favour. They were attracting those who were interested in the short cuts. They were attracting folks who instinctively know that you can’t learn to play the piano in three months, but believe that you can be a zillionaire in the same amount of time.

And that’s the role of the get-rich-quick merchants.
Their job gets some of us to realise that only hard work and dedication will get us to where we want to be. And equally important, their job is to keep taking the dollars away from people who never learn the lesson.

They were actually doing me a favour, I realised.
Because shortly after, I invested both time and money in education. I bought from people who promised me nothing but hard work. People who didn't promise the big boats, and the fancy surfboards, and all the glitz.

I carefully evaluated where I was going to spend my money, and then spent a lot of it learning from these folks. And things changed quite dramatically.

The guidance made a difference. The hard work factor never changed, but I was achieving a lot more in far fewer hours, and with far less effort. And getting paid in advance (which is always a nice thing to have).

By the time most of our clients get to Psychotactics, they’ve sowed their wild Internet oats. Most, if not all our clients have gotten over the get-rich-quick mentality.

At our workshops we work with people who are willing to put in the hard yards.
In the Cave, at 5000bc, we even have a ‘Taking Action’ section, where people post their daily progress on a specific project, while getting advice on how to move ahead. It’s nice to finally be and work with people who understand the value of continuous guided momentum.

Hmmm…
So that creep in Australia did me some good after all. He gave me a $10,000 lesson. A lesson that I didn’t understand till many years after the incident.

So now when I see the get-rich merchants roll into town and promise these gazillion dollar returns, I don’t always smile. A grimace still envelops my face. But eventually I break into a smile. And get back to work. And to drinking my coffee in peace. And playing with my MacBook Pro.

Footnote: Since 2004, barring a year or two, we've always taken 3 months off per year.
Yes, three whole months. And we spend inordinate time in the cafe. This got one waitress to ask me if I had a job. Or was
in between jobs. But this idea of the ‘easy life' can be misleading.

When we work, we really give it our all. When we don't, we don't. And it's something worth fighting for. The ability to be able to have your coffee when you want, with whom you want, and where you want— be it Auckland or Tokyo 🙂