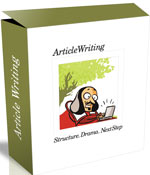 You know the feeling of getting stuck, don't you?

You set out to write something: Maybe an email, maybe an article.

And you sit there at the computer completely disgusted. Because no  matter how much you try, and whatever you write, the words just don't seem to flow.

So why don't the words flow?

Let's start with what the brain does best.

The brain recognises problems. And overcomes them. So if I were to put a chair in your way, your brain would know exactly what to do. It would either remove the chair, so you couldmove forward–or it would go around the chair.

And no matter how many types of chairs it sees in future, your brain will know exactly what it needs to do to overcome the problem.

But what if there were no chair?

What if there were an eight-hundred pound gorilla sitting in the way, instead?

Suddenly your brain doesn't know what to do. So it panics. You either run. Or you freeze in your tracks. In effect, the brain retreats or shuts down.

This shut down mode, is ‘Writer's Block.'

And the block goes beyond writers. It affects composers; artists; actors; sports stars. And of course, you and I.

To avoid this shut-down, we have fire-drills.

The reason why you had a fire-drill in school or at an office, isn't because the organisation likes making you run out of the building, and onto the street.

The biggest reason for fire-drills is to know what to do in an emergency. Because contrary to what you may believe, people don't actually panic in an emergency. They sit there, transfixed, as if in a bad dream.

And when you have an emergency: When you have to write a report, or a presentation, or an article, your brain panics. It freezes.

Suddenly it has an 800-pound assignment in the way. And it has no memory of any fire-drill.

The brain goes into panic mode. It scans memory bank after memory bank for a memory of success.

On the contrary, it finds failure after failure

Then of course, you believe that you have no ability to write

That others were born to write.
And that you're just not a writer.

You believe that others are more talented than you.

But do you understand what the so-called ‘talented' people are doing?

They have a memory of success. And it's not random success. It's the success that's a direct result of having:

You see, when they were learning a skill, these um, ‘talented' people had a mentor; a teacher; someone looking over their shoulder. Someone who not only takes them through the fire-drill, but helps them if they make the wrong move.

And this gives the ‘talented' person, a memory of success. The more the success-drill is repeated, the more it get ingrained.

And then a real fire breaks out…

And if you've been through the drill, you not only have access to the mentor, but you also have the structure, and the success-drill deeply ingrained.

So yes, if you're sick and tired of running into Writer's Blocks. If you want to learn to write just like I have, then please stop believing in this nonsense called  ‘talent'. Trust me to show you how you too can write–and become the expert in your field. The expert that writes not just great newsletters and articles, but is able to write books or just about anything.

Judge for yourself at:
https://www.psychotactics.com/articlewriting

P.S. Look for Bonus 5: Why we get writer's block
https://www.psychotactics.com/articlewriting