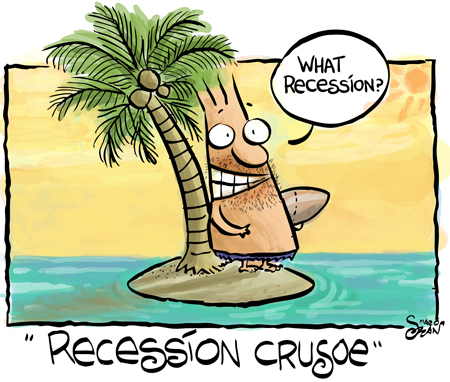 Yes, even though I've been rambling about the crisis in earlier posts, the time has come to stop it. Because everyone is now sick of it. It's like being stuck at the airport. You know the flight's due to take off. But the plane has ‘technical problems.'

The only thing you can do is learn. Improve your skills. Get some coffee.
That plane isn't due to take off for a while. And yes, the technicians are working on it. You may have your own ‘political opinion' about the technicians, but if you're so smart and opinionated, maybe you should join the technical team instead of ranting and raving.  If you're just like us normal folk, then we're stuck at the airport.

At Psychotactics, I've just bought a video camera and lights. I'm learning how to use video online.
I've bought the entire Design Premium Suite of Adobe. I'm learning Photoshop, Illustrator, InDesign and other programs.
I've started cartooning again, improving my skills by the hour.
I've started learning French and Spanish.
I'm taking the first part of our regular vacation (We're headed to the US and Europe).
I've upgraded three of our major websites.
I've bought more learning material, and I'm improving my marketing and business skills.
I'm writing five articles a day, and have been doing so for the past week or so.

So yeah:
1) Stop talking about the economic crisis. We're sick and tired of it.
2) Let the guys in charge do their job. If you don't think they're doing a good job, shut up and go and join the technical team.
3) If you're going to sit here in the ‘airport', then keep yourself busy instead of being a pest and jumping up and down.

Our plane will depart.
We don't know when. But it will leave. Till then, do something productive.