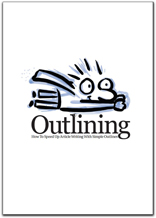 Way back in the year 2002, I had what you'd call “bad days”.  Actually they were worse than bad. They were foul days. These foul days were my “article writing days”.

I'd start off cheerily enough
I'd be inspired to write an article and would begin. And then something would happen–I'm not sure what. But it would bog me down. It would frustrate me, make me mad. I didn't want to speak to anyone. I'd write draft after draft of the article. And two days later, after much agony, I'd get an article done–if it did get done.

Many of my articles just went into an article graveyard. Most were
half done.
Or almost finished. But never quite done. And then one day I realised what I was doing wrong. And the moment that realisation hit me, my output just exploded.

It wasn't even a magic trick
It was something I'd known about for the longest time, but was resisting like crazy. But that was a turning point and I've never looked back.

Writer's Block is no longer a reality
In fact the opposite is true. So many articles, so little time.

So how do you get over your “Writer's Block” forever?
Find out for yourself
Outlining: How To Speed Up Article Writing With Simple Outlines

Warm regards from Auckland
Sean
P.S. So have a look right away.
Outlining: How To Speed Up Article Writing With Simple Outlines