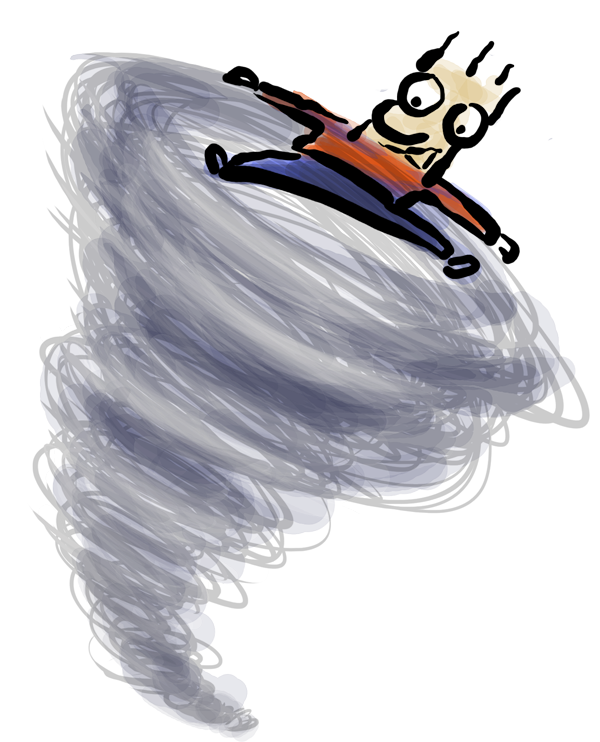 In the year 2003, I did something incredibly silly.
I started a membership site called 5000bc.

And one of the first announcements I made on 5000bc was to tell the clients I’d write five articles a week.

There was just one problem

I had been struggling to write even a single article a week. At the time, we were sending out the Psychotactics Newsletter just twice a month, and it would take a bit of head-banging to get two articles out of the door.

Nonetheless, I made the promise of five articles a week based on my experience as a cartoonist. You see, before I became a marketer, I was a cartoonist and one of my specialties was drawing comic strips—kinda like Calvin and Hobbes.

For months, I’d been badgering the editors of two newspapers to run my comic strips

They mostly ignored me—and one day they didn’t. Almost like a conspiracy, both of them agreed to run the comic strips. Now I had to do two separate comic strips, five days a week—that’s a whopping ten comic strips a week.

But I wasn’t. I found the experience to be quite the opposite. When I needed to draw a cartoon now and then, I’d struggle like crazy. The moment I had this punishing routine, I found ideas popping out of almost everywhere.

Which is about the same experience I had in 5000bc (yes, the membership site). I found writing an article a day sped up my writing like crazy. Since I had no option and made this crazy promise, I had to work out a system to write—and write well.

To write well, you can’t stay at the top level of articles—you have to go deep

Think about it for a while. Let’s say you’re writing on the topic of “triggers in marketing”. That’s a pretty top-level topic. If you jump onto any search engine and look up triggers, you’ll get some mundane “3-steps to create triggers” or something just as pathetic. That’s because top-level writing is well, pretty vague.

It’s when you go down a level, possibly two levels that you start to see the magic.

But go down a few levels and you get the following:

Taking a topic and heading way down into cave-land. That’s when you realise you can write articles about topics no one has ever thought of—ever dreamt of. You’re so excited about writing articles that you can’t help yourself. Five articles a week—just five articles a week—it seems insane to restrict yourself to creating so little information.

And your client says wow—just wow!

Most clients run into reams of inane writing. Writing that’s top level, boring stuff that ends up being filler material instead of rocking your world. When you head deep into these sub-topics, the client wants to read more. And let’s test this out right now—shall we?

Why Cartoonists Force-Fit Thoughts (And Why You Should Start Using Their Techniques for Article-Writing)
How To Write The “First 50 Words” Incredibly Quickly (Using The Newspaper Method)
How Do You Know If Your Outline Has The Humpty-Dumpty Syndrome?
Why We Struggle To Write Articles: The Myth of Unique Content
When Outlines Behave Like Cats: How To Keep An Outline From Going Off At A Tangent
Will it Bloat?: How the Outlines Gives Us Clues About The Length of Our Articles

Sure you’ve got to learn about structure.
You need to learn how to quickly write the opening paragraphs, in a way that evokes a ton of drama.

Connecting lines and sentences, so they flow into each other; creating contrast—these are all crucial to being able to turn out articles of high quality. Having all these skills is what distinguishes great content creators from the run of the mill stuff, is depth.

I had no choice back in 2003 when I announced that I’d write five articles a week.

I had no choice back in 1995 either—when I was tossed into a series of daily comic strips.

And you too need to put yourself in that position of no choice. You too can write over three hundred articles—outstanding articles a year without driving yourself crazy.

To succeed, you must learn the craft of article writing (and yes, it is a craft, and very learnable).

And then, you must go deep. Very, very deep.
So that you have a blast writing—and your clients—they love you for it!

Get 5 Free Goodies that will give you solid methods to write better articles. Click here: Free Article Writing Goodies