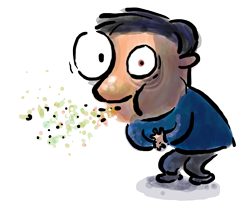 Did you eat something today?
Drank some sort of drink?
Well, there's a good chance you've been exposed to the multi-billion dollar flavour industry. Almost all the products we eat or drink have these flavours and companies spend massive amounts of money researching to make sure the get the right flavour for their product. And yet, in the early 1990s, a well-known flavour company did something really weird.

They'd conduct tons of very expensive market research and then ignore that research
Instead they'd go to one of their employees and ask her to taste the flavour and they'd wait for the “blech” response. If this employee said ‘blech' and contorted her face in disgust, the company would do something even more weird. They'd treat that particular flavour as the winner. And invariably, the flavour would do amazingly well in the marketplace.

But what was causing that employee to say “blech?”
No one really knew—not even the employee. She could kinda describe what she felt, but if you asked her to write it down so that anyone else could get the same “blech” response, she wouldn't be able to explain it to you.

But the results were outstanding nonetheless.

This is the “blech” factor at work with most talented people
They cannot tell you why they think something is wrong. But they can spot an error a mile away. In the case study above, the employee was doing the opposite. She was identifying what she thought was an error, which of course the public loved.

It doesn't matter which way you slice and dice the result, the fact remains: the talent for identifying the winner remained in place. But the problem is that the person still can't explain the steps involved.

And this is why talent becomes so very mysterious
Vic Braden is a tennis coach of great repute. He has the same problem. He can spot a double fault before the player hits the ball. Professional tennis players are able to go through entire games without making more than two or three double faults. And yet, like magic, Vic can tell—long before the ball has been hit.

There's something about the way the players hold themselves or does just before, that causes Vic to call the double fault.

And there's a reason why they can't explain this pattern recognition
For this we have to go down the road with two sets of parents. The sun is rising. And one parent turns to their child and says: “Look at the sunrise. It's so beautiful.” And the child learns the word “sunrise” and “beautiful”.

The second parent walks with their child and says: “Look at the sunrise. Look how blue the sky is right at the top. Look how it then moves to a mix of yellow-ochre and blue. And then finally look how much yellow ochre there is on the horizon. And notice that orange glow just as the sun comes up, maybe even a little pink.

And yes, isn't that a beautiful sunrise?

Now what's happened in the brain of these two kids?
Something quite interesting actually. Both are seeing the same sunrise. But one is being exposed to a completely different set of facts that goes way beyond the terms “beautiful” and “sunrise”.

They may not even understand what “blue” and “yellow ochre” is, but they will register it.

As you have registered it in your brain right now.

When you step out to look at the sky, you will never see “blue skies” again. You will see shades in the sky that you've never seen though you've been looking at skies for decades.

The problem is that the moment of recognition is brief and often unimportant
If you asked the parent: When did you teach  your child to recognise the shades in the sky? they will often have no recollection. The child themselves, will have no recollection of the event.

Over time, the pattern builds up and there comes a moment when “blech” becomes the norm. When you can see the “blech” factor unfolding before your very eyes.

But this does bring up an important question: Why is the “blech factor” so important?
It's important because the definition of talent (yes, my definition) is a “reduction of errors”. The fewer errors you make, the more talented you are. So for instance, if you were writing headlines and I showed you, and worked you through a series of ways to write headlines, you'd have to go through three separate stages.

Stage 1: How to detect a blech headline.
Stage 2: How to fix it.
Stage 3: How to get a great headline.

And because headline writing consists of simple elements that you add or subtract, it's easy to know when a headline is blech
And how to fix it. When you fix it, you get a great headline. There's no great magic to it. But without the blech factor it's hard to tell. Because beauty or greatness is abstract. But when that child grows up a bit and looks at an oil painting that has a perfectly blue sky from top to bottom, they'll know something is wrong.

They may not be able to tell you that the shades are missing, but they'll voice their “blech”—and you'll think of them as extremely talented, even though the can't explain why they are able to spot the good from the crappy.

That employee was able to detect the blech factor
Even though the market research (yes, the very, very expensive market research) was pointing in one direction, she would be able to spot a winner by the one flavour that made her feel all “blech”. And it made her company millions of dollars in contracts.

But it's all a mystery, because it can't be bottled. That code may not decrypted easily. And yet, there is a code, if you're truly interested in learning a skill.

When you find the right teacher and have a system of training in place, this code is easy to crack
You have to learn the code. And practice it. Then it becomes second nature.
You know the good stuff. And you know the blech. And you can fix it.

And people call you “amazingly talented”.
And you smile and say “thank you”.

About The Brain Audit
There are two very specific extra “weapons” that The Brain Audit gave me. Weapons that I never got from the many copy writing courses out there (and if you're like me, you've got them all, too).

The Brain Audit not only explains HOW it works, but also WHY it works. This is master-level applied psychology, necessary for any self-respecting marketer.

Gabor Wolf
Marketing Consultant— Budapest, Hungary
Judge for yourself—The Brain Audit Kit is a complete system that enables you to understand what’s going on inside the brain of your customer.
(P.S. The Brain Audit has received over 800 testimonials)

1) Story Telling Series: How to suck your audience right in, in a matter of seconds
2) Client Attractors: How To Write Benefits and Bullets That Speed Up Sales
3) Outlining: How To Speed Up Article Writing With Simple Outlines
4) Visual Basics: How Visuals Help Increase Sales Conversion On Your Website
5) Design Clarity: How to put sanity into your design with some really simple tweaks
6) Chaos Planning: How ‘Irregular' Folks Get Things Done
7) Critical Website Components: How to write compelling content for your key web pages

1) Black Belt Presentation Series: How to completely control the room—without turning anyone off?
2) New! Be Kind, Be Helpful or Begone: How To Build A Powerful, Community-Driven Membership Website