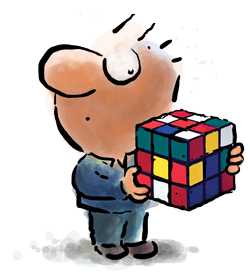 We all know this to be true when it comes to bad habits.

We open the fridge knowing that a Coke is doused in sugar.

But once the fridge is open, the trap is sprung.

We can't help but reach for the can, pour that liquid sugar down our throats and then feel good—and miserable shortly after.

And the mistake that most of us make is that we fail to set the trigger. In her book “The Creative Habit”, choreographer and author, Twyla Tharp talks about how she has to exercise every day for two hours.

And no matter how dedicated you are, there's going to be a fallout of some kind. A late night, a virus, some well-meaning friend—they can all keep you up too late. And then it's a drag all the way to the gym.

But Twyla depends on the taxi

Every day her trigger is the taxi. She just has to get to the taxi, and then she's on her way. It's like getting on the top of a huge water slide and finding there's no way back up. That's how she gets stuff done. She nudges herself towards the trigger.

Think about it: how scary is the handle on the fridge?

How scary can the taxi be?

And yet it is very scary because you suddenly have enormous momentum on your side and you have to get things done.

I wake up every day to a similar sort of trigger

I wake up and I avoid email. They often sends me hurtling into some black hole. Facebook will do approximately the same. Instead I wake up and there in front of me is my InDesign file. Or my Photoshop file.

The night before, I'll make sure the file is open on my computer and then I'll wrap up. When I boot up the computer again, nothing opens, but the file itself. And then I'm propelled to making that first step. I'll either write a book, an article or draw a cartoon (depending on which file is open).

Some days of course, I forget

And Facebook or email is the last thing I have open. Those days I'm down the hell-slide. It might seem like just 10 minutes, but I will often find that 20 or even 30 minutes pass before I can pull back.

But what works for the hell-slide also works to get me productive. Shortly after I write or draw for two hours, I have to take a walk. At this point, I'll pull out my iPhone and look at my score on Fitbit.

And there is Steve S.

Steve S. is the nemesis. A nice nemesis, but a nemesis all the same. No matter how many steps I take, he seems to take more steps than me. But I can see how many steps I need to catch up and overtake Steve. And so that sets me off on my daily walk. That in turn sets off a trigger to listen to an audio book, and then learn a language on my way back.

Of course, no one is motivated all the time

There are days, even weeks when things don't get done. Life just gets too bothersome, you promise too much—it's the same old story. Or you just want to sleep in some days. Even Facebook and email can wait.

And yes, we all get into that zone which it's kinda pointless to avoid. Sometimes you just go with the flow.

But most days the flow gets you nowhere

Good habits start with a trigger.

Next up: Do Mental Barriers Slow You Down?

How many books do you read in a year? Most people boast about how they read hundreds of books a year. That's what I used to do as well. Until I found that I wasn't really absorbing any information. Find out how speed works for you and more importantly, when it fails—Mental Barriers That Slow You Down (And Derail Your Progress).