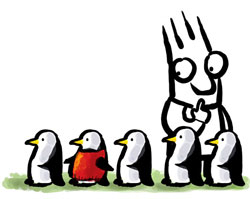 How do you get traffic?

It's an impossible question to answer. There are reasons why.

Reason 1: Your situation is not mine.
Reason 2: Technology changes all the time.
Reason 3: If you're on a wave, you ride to the shore faster.

Reason 1: Your situation is not mine

Anyone who tells you that they have a fool proof way to get traffic is just making an ass out of you. Because there are ten million ways to get traffic. And before this line is completed, there will probably be ten million and twenty ways. And no matter what I tell you, it will not apply to you. But let me try anyway.

Let me tell you that the best way to get really qualified traffic is to do presentations. So I'm saying this: Do what a friend of mine does. Get on a plane for 200 days a year and speak at events back to back, and you'll get traffic.

Or do what Marketingprofs and MarketingSherpa did when they started. They cross-promoted their lists. Or do what Red Bull did. They sent out Red Bull cans by the dozen to the coolest groups in the university (everyone wants to do what the cool ones are doing).

You're getting the point, aren't you?

You are looking for some cut and dried way to get traffic. And there isn't a way. Instead there are ten million and forty seven ways (yes, it just got updated) to get traffic.

And you have to choose the top ten ways that would possibly work for you. And out of these top ten, about one or two will drive 80-95% of your traffic. And of course, you'll get lucky and some people will find you or hear of you. There's always that luck element. But there is no way. And the reason why there is no way is because of technology.

Jay Abraham was a cutting edge marketer in the year 1995. Then the Internet waltzed through the door. Jay didn't know much about the Internet. Someone else got to wear the crown.

Microsoft dominated the world of computers and they still do. But that edge is being taken away. Not one of us could have foreseen getting customers through Linked In or blogs or Facebook or some other media. And because technology keeps moving on, you have to waltz out of the door and into the street with it.

Our list has grown ten fold over the year 2004, but the demands on your customer's attention has grown as well. So let's just take a simple example.

Our list has grown. What also doesn't make sense was that with 1500 people on the list, it would take us 4-6 weeks to fill up the course. It now takes us as little as 177 minutes. And sometimes fewer than 60 minutes.

At least 10-15 of a batch of 20 signed up solely because we met them in a live workshop in Washington DC and Vancouver, Canada. That may not have happened if the price of the tickets weren't as cheap as they are now. So changing times and technology plays a huge role in getting customers. And that's not counting being on the wave. So what's the wave?

iTunes was new, along came a podcast called Coffee Break Spanish. This was a Scottish guy, Mark Pentleton, teaching Spanish with a Scottish accent. No one had heard of Coffee Break before. But there was a podcast wave. People had new iPods and new iPhones and were travelling (yes, with discounted air fares) and so they wanted to learn Spanish. And where better to look than on iTunes?

That was a while ago. They may have doubled since then, I don't know. But to say that iTunes was the saviour is to sell Coffee Break Spanish short. They worked their butts off to get people to sign up. They got people to cast votes on various podcast sites. They managed to get PR and get on radio shows (my memory is a bit fuzzy here) and the juggernaut started rolling.

Lynda.com was just a site.

Heck it wasn't a site. Lynda Weinmann published tech how-to books. When they started out, video was impossible. Then the Internet changed. Video changed. And today they have a few million hits every month. All by magic, of course. Not really.

Lynda advertises on Facebook. They go to schools and universities and offer them special prices. They partner with Adobe.com and Adobe promotes a lot of the videos that in turn show how Adobe's products are best used. They get a ton of traffic and they do a ton of things to get that traffic.

The same applies to any wave.

In the year 2002, you could be reasonably average and get a few thousand subscribers.

I know this because our stuff was average back then. I'd just switched from a career in cartooning to marketing. I didn't know much, didn't write quite as well and finding our subscribe button on the page was like looking for a needle in a haystack.

But a few thousand subscribers signed up. But that's the wave. If you're there when it breaks, you ride it and you're first to the shore. If you're still wondering what to do and which way to get traffic, you've missed the wave and will keep missing them forever.

So is there one way to get traffic?

No there isn't.
There never has been.
There are ten million ways. And next week there will most certainly be a lot more. You just have to start somewhere. So where do you start?

Just like we get on a plane from New Zealand and fly half way across the world to do a two-day workshop. It's a lot outside our comfort zone. It's a lot to cross time zones, work out a presentation, answer twenty thousand questions in a week or two. It takes a month of preparation and a month of recovery. But it's what we do. And it's one of the sources of traffic.

Not your source of traffic.

Our source.
Go ahead. Find your own.
Start today!

The Uniqueness Mastery Workshop is a precise system that enables you to get your product or service to stand out. And not just stand out in a garish, uncomfortable way, but in a manner where the customer knows exactly why they're choosing you over the competition.
Have a look Uniqueness Mastery Live Workshop