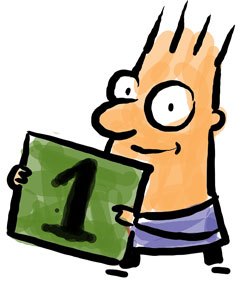 Do headlines work? How do you use headlines? How do headlines grab attention? What are the things to keep in mind while writing a headline?

Let's find out, shall we?

Haven't you stood in the wrong supermarket queue before?

Every other queue seems to move ahead, but no, you had to pick the wrong queue. And there you are, stuck as ever, cursing your luck.

Because you're in no hurry to get anywhere, you still don't like being stuck in the slow queue. And, of course, when you're writing headlines, you can get stuck forever if you don't get to the ‘one thought' right away.

So what's the ‘one thought? And how does it work in a headline?

The one thought is often a single word or a phrase that binds the entire article together. So if you had a word like ‘reject', what ideas come to your mind when you hear the word ‘reject?' You could think of the Ugly duckling and how it was rejected. Or you could think how you were left out of school games. Or a dozen other examples.

But what brings those dozens of examples to life?

Let's pick three ways to get headlines that work

1) Find the adjective or verb in your headline

If you happen to be one of those who writes the headline before they write the article, you're in luck—but only if your headline has an adjective or verb (um, all headlines have at least one of that). So let's take a few headlines:

a- Are You Using This Emergency Email Tactic In Your Marketing?
b- How Ego-Killers Drive Clients Away
c- Do Long or Short Headlines Work Better?

In the first headline, we have 'emergency'. Now, can't you think of at least two dozen examples or case studies of emergencies? If you don't want to tell a personal story, go to the Economist. Or go to a magazine like Rolling Stone. And there you'll find an emergency. Re-phrase the case study or story and you're good to go.

In the second headline, we didn't have an adjective. We had a verb kinda combination of ‘drive away'. Now you drive mosquitoes away, nasty salesmen away and someone in history drove the Beatles away as well. Again there's no limit to the examples.

But in the third headline, we have two adjectives. So which one do we choose?

It doesn't matter. You just pick one and drive home the point with that one adjective. So if you're talking about an analogy which involves long, you talk about how you were bored at a long speech, or how long the journey seemed when you were driving, or some other long story. Later you can bring in the short aspect of it, and contrast nicely.

But that's just one way. The other way is to look for the specifics in your headline.

2) Look for the specifics in the headline

Specifics are simply adjectives that drive home a fact with more impact. So let's look at some examples:

a- How to Make Sure You Get Paid On Time
b- How to Write an Article in 33 Minutes or Less
c- The 70% Principle: Why You Never Get Projects Off The Ground

The first headline was ‘on time'. The second was '33 minutes or less'. The third was ‘Just 70%'. Now you can easily think of instances of being on time, or things that were on time. For instance the entire train system in Japan is ruthlessly on time, down to the last minute.

Or if we look at '33 minutes or less', we can think of many thing that we can do or have been done in 33 minutes or less. e.g. eating a meal, going for a walk. And the same applies to 70%. So if you find the specifics in the headline, you'll find an analogy or story that fits just right. And you're on your way.

But if you're still stuck, there's a third way.

3) Break up your headline into tiny parts

So let's say you're writing about how you need to beef up the security on your website.

So let's break that up:

So now we have two thoughts we can work on

Either one can be the first fifty words.

But let's get some analogies and stories.

– Eating a ton of carbs before the marathon.
– Getting ready for the storm.
– Saving money for a rainy day.
– Why Posh Spice almost starves herself.

– The day I failed to lock my motorcycle and it got stolen.
– When my father's bags were robbed from the car.
– Why our doors in New Zealand are open most of the time.

So you see what's happening?

1) We first isolated the words in the sentence.
2) We then figured out which ones we could work with.
3) We came up with analogies or stories based on one thought.
4) We realised we found stories that were pro-security and pro-beefing up, or anti-beefing up and anti-security.

And so we have three ways to use headlines to get us to the one thought. But we can still run into trouble pretty easily by being too obvious.

So what's too obvious?

If your headline has the term juggle in it, you'll think of juggler. That's terribly obvious and doesn't create a ton of excitement. But you can create a bit of excitement by going the opposite way and talking about when juggling went wrong.

The easiest way to stay away from the obvious, is to go the opposite way. If the one word you have is ‘kind', then move you story or analogy to ‘rude' or ‘cruel'. Of course, this is only one way of avoiding the obvious.

You can take your one word and look up Google images, and see the results you get. You may get a great idea right away, or you may get inspiration for another idea. As for me, I like going to the thesaurus as well, as it brings up related words. That helps me to think of the same word in a different way. And all of these systems: using the opposite, using Google images and a thesaurus, all work towards helping you stay away from the obvious.

So let's summarise how to get your headline to work:

The headline can be the key to your one thought. And it can greatly speed up your process. It's almost like being stuck in the wrong queue at the supermarket, and then magically a new counter opens up.