(Also listen to the audio at the end of this article) 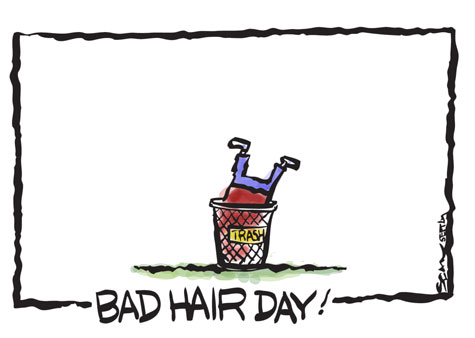 Your business will have a Zidane Moment. Some time in the future, you'll run into a situation that you cannot foresee; cannot perceive; and one that will cause your business to feel an instant shudder.

What's the Zidane moment, and how can you recover from one?
The referee didn't catch it. The linesmen were focused on the ball. The crowd was not even looking in his direction.

Yet in the final of the Football World Cup, Zinedine Zidane captain of the French football team, did what most businesses may inadvertently do. In one fraction of a moment, he went from being the darling of the crowd, to a villain, who was sent off the field in disgrace.

One moment of anger, led to Zidane head-butt his opponent–an action that caused the red card to come out and cause the French team to be instantly handicapped without their star player.

Your business can be instantly red-carded at an unexpected moment
Some time in the future, your business will come under an unexpected spotlight. You'll do something that you just didn't want or mean to do, and suddenly you'll be faced with a crisis that you're not sure how to handle.

Have you ever got 35 emails from one person?
One morning on a day local retailer Janet would rather forget, her company managed to send out over 7,000 emails in less than an hour. In effect, she accidentally sent out 35 emails to each of the 200 people on a particular list.

Here's How Her Horror Story Unfolded…
Janet was new to email. And didn't have any software, and even less of a budget to send out email through an email-based company. So she wrote a little do-it-yourself program that sent out an email to each individual address, without revealing the whole ‘cc' list.

She was so proud of her programming prowess! All the names of the recipients were on that list, and the server picked them up one by one, sending the email to each individual.

Which Was Fine in Theory…
None of the recipients could see the other people on the list. They didn't know that it had gone to 199 other people. But she hadn't thought through the complete process. One unforeseen bug dialed Murphy's number. When a recipient hit reply, her little program sent their message to everyone else on the list!

All it Took Was One Person to Hit the Reply Button
It just so happened that the first person who did, also attached a personal note to Janet. This personal note then went to all 200 people on her list. A client who got to work early, saw it, and emailed Janet to say that she was getting Janet's personal mail.

The client hit reply and sent her reply to 199 other people she didn't know were on the list. Soon everyone began complaining by hitting reply, and thousands of emails danced Janet's server dizzy.

As if that weren't enough, the Take-Me-Off-Your-List Brigade started their charge, effectively turning a sunny day into a raging cyclone!

Not to belabor the story, Janet had the problem fixed within the hour. But by that time, she'd already been ‘Zidaned'.

So which are the instances of a Zidane Moment in a business?
Here are just a few instances of things going wrong, either by mistake or in some cases, even on purpose.

1) You could have inadvertently overcharged a client.
2) A client may have received defective/incomplete goods/services.
3) The client may have had to pay for a mistake you made.
4) You may have been tempted to extend a special offer and be caught out.
5) You may breach an unwritten confidentiality understanding.

And yes, you're in a soup. But there are simple rules to get out.

What are the core rules to recover from a Zidane moment?
1) Don't try to hide the truth: Clients (and viewers) understand that things go wrong. And if you tell the truth, most of them understand and sympathise. The more you try to hide the matter under a bushel, the more likely you are to make clients really mad at you.

And if you're a public figure, you're really dealing with reporters who are going to dig out the truth, no matter what.

So you can save yourself a lot of embarrassment, by revealing the truth upfront. The truth has a ring of ‘boredom' and ‘sympathy' around it. Lies have a distinct flavour of ‘gossip' and ‘excitement.' The last thing you want to do, when you're in trouble is to foster the gossip and excitement. And if you have any doubts about the truth, speak to Bill Clinton and his Monica affair. 🙂

2) Apologise instantly: Clients aren't out to get you. Yes, you've had your Zidane moment. Yes, you've done what you shouldn't have done. But there's no need to hide or sulk. The best thing to douse the flame of ‘gossip' instantly, is to apologise profusely.
The more repentant you are, the more you're likely to be forgiven by your clients.

3) Make amends: Wherever possible, make amends. Give clients a future credit. Give them a small gift. Send them a small note apologising and making sure they know you didn't mean to do what you did.

Is this advice too simple?
Do you think the Zidane moment won't hit you?
Well, it will. If not today, sometime in the future you'll goof up. And when you do, simply get into recovery mode.

And turn your Zidane moment into a PR coup instead!

Epilogue:
Janet apologised to her clients, and offered them a bar of chocolate for her 'email fiasco.' Most clients were happy to just ‘forgive her'. Some took up the chocolate offer. And as a direct result of the ‘fiasco', and the ‘recovery', Janet got additional work worth over $5000. Now isn't that a story with a nice ending?

Next Step: Want to get more Marketing Strategies? Find the entire marketing strategies series in text, audio with cartoons!