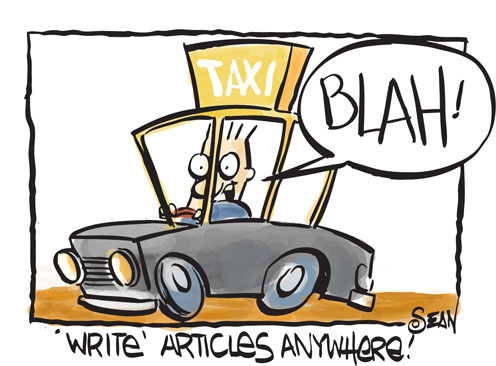 Yesterday I went to buy some walking shoes.
And I ended up spending $2000. And that's not counting the shoes.

Now, did that opening get your attention?

Sure it did. It sucked you in. And the reason you hear that strange sucking sound is because I didn't start off the article as most people do. Most people slide logically into an article. But you can use the power of the story. And not just the story, but the middle of the story. Because there, smack bang in the middle lies the drama—the part that really captivates your reader.

So how do you know what to pick as you unfold your story?

The answer is actually quite mundane—even, counter-intuitive. To get that drama, you don't have to pick anything particularly exciting. You just have to make it exciting for me.

So let's say we went back into my world of yesterday

Were the purchase of the shoes the most important point?
Or was it the purchase of a draughtsman's table?
Perhaps it could be Italian food we had for dinner. Or just about anything.

In a story, you have at least three-four exciting points and any one of them can rise to the surface. Yes, any point is exciting. What really matters, is how you bring a factor of excitement to the story. As you explain the details, the simple fact becomes interesting.

And master storytellers know this to be true

They know that even a mundane story can be brought to life in the way you recount it. In a presentation at TED.com, speaker, Hans Rosling tells a seemingly mundane story of a washing machine. And Hans has many options when telling this story, but he chooses to talk about the ‘button-driven miracle' of the machine. And he stays with that angle to get your attention.

And here's how it unfolds…

“I was only four years old when I saw my mother load a washing machine for the very first time in her life. That was a great day for my mother. My mother and father had been saving money for years to be able to buy that machine.

And the first day it was going to be used, even Grandma was invited to see the machine. And Grandma was even more excited. Throughout her life, she had been heating water with firewood, and she had hand washed laundry for seven children. And now she was going to watch electricity do that work.

And she sat down in front of the machine, and she watched the entire washing program. She was mesmerised. To my grandmother, the washing machine was a miracle.”

So what's the interesting part in this story?

You can feel the excitement, the awe, as Hans tells the story. And it's these sets of emotions that keep the drama going and the heart pulsating.

Which brings us to this bizarre set of conclusions

1) That you can pick any story or any subset of a story to get the drama going. And you often find this drama somewhere in the middle of your story.
2) The most important factor is one of enthusiasm. Bringing out the fear, the surprise—all of those emotions are what keeps the reader engaged.

One of the best ways to get the reader's attention is to tell a story. But easily the best way to get that story raging ahead is to pick something—anything from the middle of the story and use it to start your article.

And as you work down your way through your story, you'll find at least two three spots where you can harvest great emotion or unusual drama. Now that you have that emotion/drama, it's just a matter of putting that stuff at the top and drawing your reader in.

It's a beginning no reader can resist.